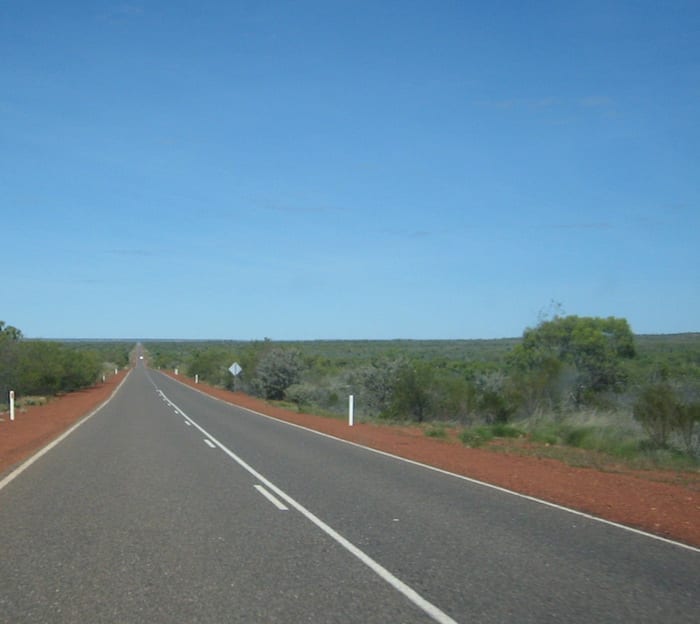 After relaxing at Mataranka Thermal Springs, we vaguely headed South on the Stuart Highway. We made our way south to Tennant Creek.

Grey Nomads on The Move

Anyhow, back to the scenery…

We passed through Daly Waters, Newcastle Waters and Elliot.

Daly Waters was named by John McDouall Stuart in 1861. A series of natural springs meant this area would eventually become a settlement for drovers and travellers. Daly Waters is best known for its famous pub. It’s also the beginning of the Savannah Way (or Carpentaria Highway) East to the Gulf of Carpentaria.

Newcastle Waters is best known as an important stop-over for drovers moving cattle from Western Queensland across the Barkly Tablelands, then onwards to Victoria River (North-western Northern Territory) via the notorious Murranji Track.

Elliot is a small town South of Newcastle Waters and pretty well halfway between Darwin and Alice Springs. It has a caravan park and supplies. Cattle moving South are treated for ticks here. So Elliot serves an important function in Australia’s cattle industry.

By now, you’re probably getting the feeling that this area is cattle country. And you’d be right. You’re in the Barkly Tablelands, black soil plains ideally suited to beef cattle – providing it rains.

Further South you’ll pass Muckaty and Banka Banka Stations. Muckaty came to prominence in 2007 as the proposed site for a nuclear waste dump. The traditional owners strongly opposed the plan, with the Federal Government finally abandoning the idea in 2014.

Banka Banka was the first working pastoral lease in the region. You can see the homestead and outbuildings from the Stuart Highway. Wisely, it nestles against a small range for some protection from the weather extremes of this area.

In 1860, John McDouall Stuart was attempting to reach the North coast from Adelaide, for the second time. He was accompanied by William Kekwick and Benjamin Head.

They camped on a creek to refresh and regroup. Water was available in this creek for both the men and the horses.

While there, they communicated with the local Warumungu people. The Warumungu people presented Stuart and his companions with food. In return, they started helping themselves to Stuart’s provisions and equipment. In a classic mis-understanding, Stuart mis-interpreted the Warumungu’s actions as theft. From the Waumungu people’s perspective, they were simply doing what they’d been doing forever – sharing.

So Stuart and his men drove the Warumungu people away. Understandably, relations between the two groups broke down.

The expedition travelled a little further North. Stuart followed a creek which at first looked promising, but then quickly petered out. Stuart was concerned. They had seen little rain since March and would be returning through this country in summer.

They followed the creek back the way they’d come. The Warumungu people had clearly decided this expedition wasn’t friendly after all. Or maybe they were concerned Stuart’s thirsty horses would drink their vital water supply completely dry. So they ambushed Stuart’s group, forcing them to escape South.  The expedition fired upon the Warumungu people, but there is no record of whether anyone was injured or killed.

Wisely, Stuart decided to abandon the expedition. Despite the possibility that Burke and Wills would beat him to the Gulf of Carpentaria, Stuart was smart enough to know when he was defeated. The horses were fading fast, the men were suffering from scurvy and provisions were low. So they headed back to Adelaide.

This place became known as Attack Creek. It’s about 75km North of Tennant Creek and is now a Rest Area. A monument (Australia loves monuments!) briefly describes what happened here.

I’ve always found this conflict to be quite strange and out of character. Unlike most other explorers – with the notable exception of Edward John Eyre – Stuart had an understanding of the Aboriginal people and their culture. He knew they were master bushmen and respected their culture, knowledge and skills. Stuart also knew they would help him in times of need. Makes you wonder whether there’s more to the story…

Moving ever southwards from Attack Creek, you’ll soon arrive at The Threeways Roadhouse. The Threeways has fuel, a caravan park, pool, bar and restaurant. The Barkly Highway starts here and takes you across the Barkly Tableland… over the NT/QLD border, through Camooweal and Mount Isa, finally ending at Cloncurry. 757km in total.

A hop, skip and jump later, you’ll be in Tennant Creek. We checked into a really quiet caravan park and settled down for a brilliant sleep!

Tennant Creek was named after a creek just North of the town – makes sense! Stuart named this creek on his first foray North. He clearly decided the man who was paying his bills – one John Tennant – deserved some recognition.

Surprisingly, gold is mined around here and has been since the 1920s. Unsurprisingly (Australia is brimming with minerals), various other minerals are mined here too.

In 1872, the Overland Telegraph came to town. A repeater station was built and the building remains intact today.

At first, you might think there’s not much to see on the Stuart Highway between Mataranka and Tennant Creek. However once you start looking, there’s lots to see.

Next time we follow the Stuart Highway further South to the amazing Devils Marbles.