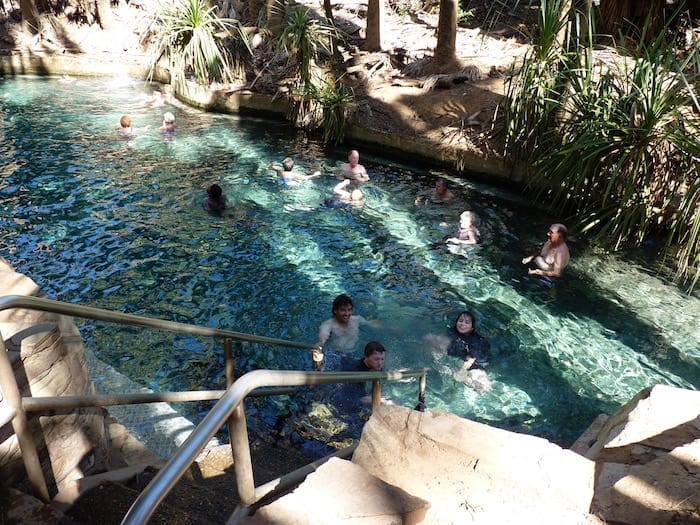 Note: This article contains an affiliate link to Apple. If you click through and make a purchase, we earn a small commission at no extra cost to you.

Fresh from an amazing experience at Manyallaluk Aboriginal Community south of Katherine, we travelled about 100km down the Stuart Highway to Mataranka Thermal Springs.

Let’s start by clearing up some confusion. Mataranka is a small town, just over 100km South of Katherine on the Stuart Highway. Elsey National Park lies to the East of the town and encompasses the thermal springs.

In turn, Mataranka Homestead lies within Elsey National Park and is privately owned. The Homestead has access to the thermal pools, which are on the Waterhouse River.

Just downstream, the Waterhouse joins Roper Creek to become Roper River. This flows about 1,000km East to the Gulf Of Carpentaria.

Confused? Check out this map…

Mataranka Homestead is privately run and surrounded by Elsey National Park. It’s easily accessible from the Stuart Highway and is an extremely popular destination in the dry season.

The Homestead provides cabins, motel rooms and a large campsite. Given its easy access from the Stuart Highway, you’ll find all types of people here, from Grey Nomads to European backpackers, travelling high school groups and everything in between.

For us, it wasn’t ideal. It really is a place to party and the camping is quite expensive. Unfortunately it was party-central every night, until the early hours of the morning.

Having said this, if that’s what you’re into then you’ll love it. A band plays 6 nights a week, which is great entertainment and a good way to meet fellow travellers.

Lets move on from my grumpy old man rant…

In the 1900’s Dr Gilruth was a much-despised Northern Territory Administrator. Apparently he was eventually run out of Darwin in 1919! During his “reign”, Gilruth set up a farm at Mataranka and the homestead was built in 1916.

Gilruth promoted Mataranka as the site for Northern Australia’s future capital city. Indeed the town was actually surveyed and streets were named. He also pushed hard for the rail to be extended to Mataranka from Darwin, with mixed success.

No doubt he was planning to line his pockets – yet another politician abusing his position of power for personal gain. Some things never change…

After WWII an ex-soldier, Victor Smith bought Mataranka Homestead. He had recognised the tourist potential of the hot springs and turned it into a “resort”.

Over the years, the area encompassing the thermal springs became Elsey National Park. So Mataranka Homestead became an island of private land inside the National Park. It remains this way today.

The thermal springs are absolutely magnificent. You step out of the classic Top End savannah country into another world – a paradise of cabbage tree palms, paperbark trees and pandanus palms.

As an aside, this area was “discovered” by surveyors in the 1860’s. They were surveying a route for the Overland Telegraph Line, from Adelaide to Darwin. I imagine they would have been rather surprised to find such a magnificent location surrounded by a vast desert.

Of course, the Mangarayi and Yungman Aboriginal groups had discovered this area many thousands of years earlier. Their life here must have been close to perfect with endless water, food and shelter from the elements.

The thermal pools themselves are a revelation. Crystal clear water bubbles deep from underground and meanders through the pandanus palms. The water has a subtle bluey-green hue, and you can see directly through the water to the bottom of the pools.

During World War II, Mataranka was used as an Army depot. Strategically, it was a vital supply link to the forces based further North. The main pool was concreted and used as a private retreat for the officers. I wonder what the regular soldiers thought about that…

This concreted pool remains and is a delight to relax in. The water is so warm and soothing to sore muscles and weary bones.

Bitter Springs is a short drive away and located in the Elsey National Park. As you’d expect, it’s very similar to Mataranka pool.

You can follow the creek downstream. If you have snorkelling gear, take it with you. We saw turtles and quite a few fish. Apparently fishing is allowed here, so take your rod if you’re into fishing.

Elsey Station lies to the East of Mataranka. The pastoral lease was originally taken up in 1879 and covers over 530,000 hectares (1.3 million acres). The Roper River runs through Elsey Station, as do many other creeks and tributaries.

You can view the replica homestead and get a feel for the spartan conditions in which the settlers lived.

Elsey Station has now been returned to the traditional owners. It’s owned by the Mangarrayi Aboriginal Land Trust and was handed back in 2000 after a nine year struggle.

So to sum up, Mataranka Homestead provides a great base to explore the surrounding Elsey National Park, the thermal springs and Elsey Homestead. Just don’t go there expecting solitude…

Next time we continue our journey down the Stuart Highway to Tennant Creek. Surprisingly, there’s plenty to see.