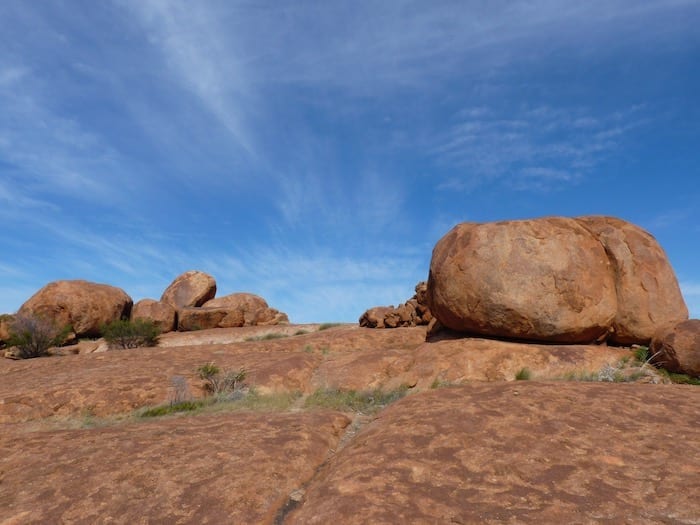 After staying in Tennant Creek for a night, we made our way South to the Devils Marbles.

So, where are the Devil’s Marbles? Well, if you’re on the Stuart Highway between Alice Springs and Tennant Creek, then you won’t miss them. The highway runs right through the Karlu Karlu/Devils Marbles Conversation Reserve.

You’ll have to drive over 390km North from Alice Springs or about 100km South from Tennant Creek if you want to pay a visit. Wauchope is about 10km South – you can get fuel and basic supplies here.

The Conservation Reserve covers about 1,800 hectares. Outcrops of granite boulders are spread far and wide. However, an access road on the eastern side of the highway gives you easy access to the Marbles.

There’s a day use area, campsite, Nyanjiki Lookout and lots of walks between the boulders.

How Did They Get Here?

Millions of years ago, molten granite pushed upwards under a layer of sandstone. As the granite cooled it cracked, forming rectangular blocks stacked on top of one another.

The sandstone cover eroded away and the granite became exposed to the elements. Over time, wind and rain rounded off the blocks to form what you now see.

Here’s the Alyawarre people’s version of how the Devils Marbles first appeared.

Arrange came from Ayleparrarntenhe, the twin-peaked hill in the east of the Karlu Karlu Conservation Reserve. He made a hair belt (which initiated men wore).

As he walked and twirled the hair, clumps dropped on the ground. These became the rocks. Then Arrange spat and his spit became the boulders in the central part of the Reserve.

Eventually, he returned to Ayleparrarntenhe and still lives there today.

The Devils Marbles have a certain aura about them. Those of you who have been to Uluru or Kata Tjuta will understand what I mean. It’s easy to see why this area has such cultural significance for Aboriginal people.

You’ll find this is one of those places where you sit on a huge boulder and gaze into the distance, lost in your thoughts. Time just seems to stand still and kind of loses its importance. And you’ll feel pretty insignificant in this massive landscape – just a tiny dot on a huge planet.

The best part about this place? You can roam… you’re not confronted with endless warning signs or required to keep on a neatly manicured walking path.

The campsite is enormous – basic but tidy and functional. It has toilets and fire pits. We were glad to score a fire pit since the weather was cold and overcast. Bring firewood with you though.

But… we were there in late June and the campsite was packed. It looked more like a shopping centre carpark than a bush campsite.

The caravans start rolling after lunch and don’t stop until after dark. You look around and think there’s no more room, but they just keep coming – jamming in like sardines.

The tourism brochures say the best time to visit is between April and September. As far as temperatures go, I’d agree. However to miss the crowds, next time we’ll be going to the Devils Marbles outside of April to September.

It’s such an awesome place – just a shame about the crowded campground. Having said this, everyone was respectful of others and quiet.

One thing you must do is get up before dawn and watch the sun rise. The kids took a camera each and came back with some incredible sunrise photos. The cloud and distant showers just added to the spectacular light show.

Next time: Crossing the Barkly Tableland and camping near Camooweal.