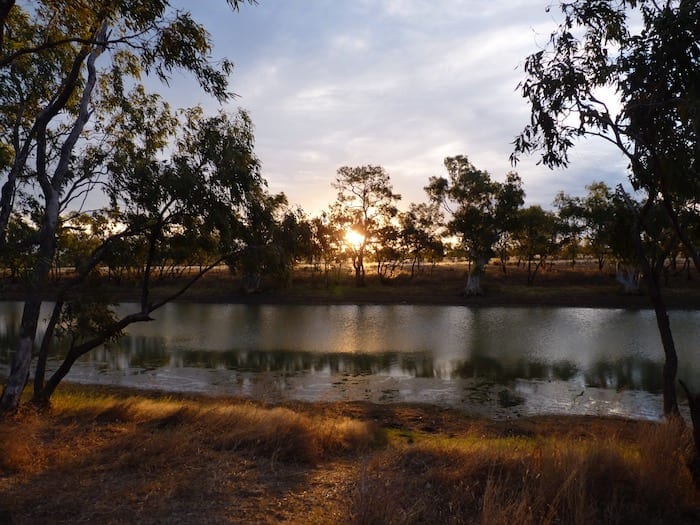 After a packed house at the Devil’s Marbles camping area, we were looking for solitude. So we headed towards Camooweal, over the border in Western Queensland.

We left the Devil’s Marbles just in time. It rained heavily just after we left and continued for a couple of days. Cold south-easterly winds made for a pretty miserable morning.

Making It Up As We Go Along

We cruised up past Tennant Creek then turned right at The Three Ways Roadhouse.

The plan was to go east along the Barkly Highway for a while, then turn north onto the Tablelands Highway. Then we’d take a dirt road for a couple of hundred km north-east to Hell’s Gate on the Savannah Way.

However, there was lots of rain about. So we decided not to repeat our Gibb River Road experience and headed east to Camooweal instead.

The rain chased us all the way and finally caught up with us at Camooweal, although it was only light. However the sou-easter was howling and the cold weather continued. So we battled the winds all the way across the Barkly.

The Barkly Tablelands are flat, really flat. The country varies from rocky ranges to beautiful black soil plains… from quite heavily timbered country to Mitchell grass plains stretching to the horizon. It’s easy to see why the Barkly Tablelands is prized cattle country.

We crossed the Northern Territory/Queensland border and pretty soon we were in Camooweal, a small Western Queensland country town.

Solitude And Large Holes In The Ground

After a rough track in, we landed at Nowranie Waterhole. It was brilliant, you back onto a billabong. We were the only ones mad enough to brave the cold, so we had the place to ourselves. The only downside was that the wind was so strong that we weren’t game to light a fire.

Update #1: Fires aren’t allowed in this National Park anymore, so don’t get any ideas!!

Update #2: Camping is no longer permitted in Camooweal Caves National Park. You can stay at nearby Camooweal instead, and drive in for a day trip.

After a fitful sleep due to the creaking camper trailer (the wind didn’t let up), we had a quick look at a large sinkhole.

Soluble dolomite laid down over 550 million years ago has dissolved, forming a network of caves deep underground. Vertical shafts up to 75 metres deep link some of these caves together. The sinkholes are formed when cave roofs collapse.

It’s a strange feeling knowing that under your feet is a vast network of caves. Without the sinkholes, you wouldn’t have a clue what was underground.

Camooweal Caves National Park is one of those dots on the map that you’ll pass without a second thought. However, it’s worth turning off and having a look.

Next time: Visiting dinosaurs and relaxing at Adels Grove.