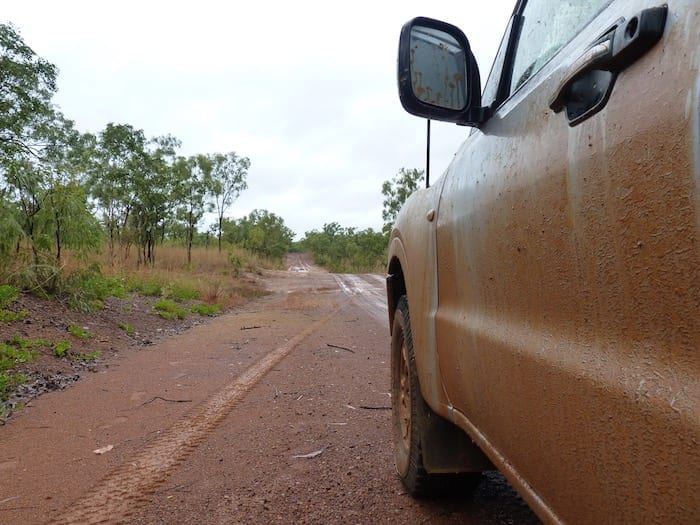 Kalumburu Road In The Mud

By the end of our second day camping at King Edward River Campground, escapees from Mitchell Falls were trickling into the campground.

What was going on? Well, the rangers had told them to get out or risk being stuck there for a couple of weeks. Big rains were headed this way, a late burst of the wet season in mid-May.

The sky was getting darker and the air was thick as the day progressed. Just before dark, we were inundated with frogs of every shape and size. They were on the ground under our awning and all over our camper tent.

Then just on dark, the rain started. More an unrelenting wall of water than rain, a classic monsoon deluge. And it poured consistently all night. The frogs had known this was coming and were evacuating from the nearby river.

Peta and I lay awake all night. When I wasn’t mopping up leaks inside the tent (it hadn’t been properly soaked since we left home 7 months ago!), I was lying there wondering how we were going to ration our food. Clearly fresh water wasn’t going to be an issue… but we had 2 kids to feed. And two growing kids consume massive quantities of food!

Dawn arrived and so did Bruce the Camp Host. He informed us rain was forecast for the next 4 days. We could stay or leave but we’d be stranded for at least 2 weeks because Kalumburu Road would be closed. If it was just Peta and I, we could  – and probably would – have stayed. But with 2 ravenous kids, we’d be choosing which one of us to slaughter for meat by the end of the first week…

A Very Soggy Pack Down

So there we were. Time to pack down in torrential rain – not really my idea of a good time. At least it was warm – and Peta had the good sense to get some dry clothes for us to change into before we drove away.

By the time we’d finished packing down, there was more water inside our camper trailer than outside. Oh well, not the end of the world.

What was scary though, was the fact we were last to leave the campground. Worse still, the last vehicle from Mitchell Falls had come through the night before. So we were going to be the last vehicle on the 100km slog through Kalumburu Road mud to Drysdale River Station. Not a good feeling at all.

Dusting Off The Skills

It had been many years since I’d driven through deep mud. I grew up on an isolated sheep and cattle property in the Southern Tablelands of NSW, so wet and muddy roads were familiar to me.  In fact, slipping and sliding up and down mountainous clay roads in an old Valiant or an ancient Land Rover are some of my earliest memories.

But this was different. Firstly, I had no idea of the soil up here – was it clay, sandy, black soil? Secondly, how fast did the rivers rise up here? I knew nothing about the terrain. Lastly, I had a family to look after. If we ended up badly bogged, maybe they’d have to slaughter me for food after all…

Time to get into it and see what happens. We’d figure it out somehow.

We sloshed out through a campground awash under sheets of water. King Edward River crossing had risen by about 6” – not a big deal by itself, but more an indication of what was happening on Mitchell Plateau.

We had cursed the corrugations on Kalumburu Road only a couple of days earlier. Now we welcomed them, since they signalled firm ground. The road was covered in pools of water in places and the smoother red soil parts were greasy, so a gentle hand was needed.

Then we hit the clay.

It went on and on for a good 3 or 4km – a relentless mush of clay about a foot deep. We slipped and slid then slewed sideways into a deep washout on an incline. I thought we were goners. But after a super-fast gear change into second gear low range, the good old Pajero bit in and dragged us plus the heavy camper over the incline and onwards through the sticky clay.

Finally we reached the end of the clay and stopped for a breather. Peta was a shaky mess, my arms were shaking from adrenaline and the kids were having a ball! The GPS very kindly informed us we were at the furthest point from both the campground and Drysdale River Station. If we’d got stuck in the clay, it would have been a very long wait for help.

It wasn’t over yet. Lots of smaller patches of clay kept us entertained. At one point we saw the wheel tracks of a vehicle that had come within inches of dropping sideways into a 4 feet deep washout. At another we were sliding sideways with the camper trailer basically sliding along beside us.

What a drive! I can’t even begin to describe the feeling when we reached the turnoff to Drysdale River Station. 100 long kilometres in 3 ¼ long hours.

By now you might be wondering why we allowed on the road at all, given the damage we were doing to the road. Well for the locals, the choice was pretty clear – have a bunch of tourists stuck in a remote area possibly without much food, or get us all out while they could. They wisely chose the latter.

Another factor was the time of year. Kalumburu Road had just re-opened after the wet season. The grader had only done a quick run up the road to clear the biggest washouts. So the damage from the wet season hadn’t been fixed yet.

It just goes to show, you need to be prepared when travelling to remote places. Anything can happen. Always have food reserves and lots of water.

We were well prepared. However, it simply wasn’t possible to carry enough food for the four of us for more than a week – we just couldn’t fit it in. We did have emergency rations stashed away – dry biscuits, tinned food and so on. One way or another, we would have managed if we’d been stranded. Although I still wonder if Peta and the kids were eyeing me off as an emergency source of protein…

Next time: Drysdale River Station and “war stories” from regions near and far.