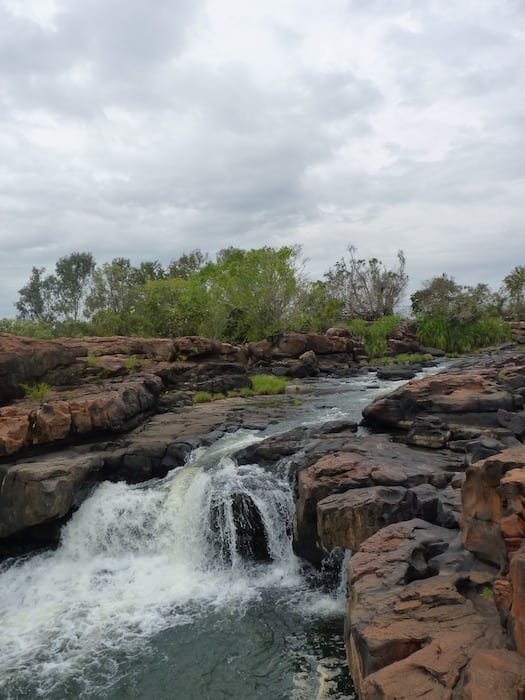 King Edward River – Perfect Serenity… If You Survive The Corrugations!

Last time, we had a well-earned rest at Mount Barnett camp ground and explored Manning Gorge. Go here if you missed it.

Heading vaguely east from Mt Barnett, we decided we just had to see Mitchell Falls. Now to get there, you first have to take on Kalumburu Road. It can’t be that bad can it?

Well actually, it is.

Drysdale River Station is about 60km along Kalumburu Road from the Gibb River Road turnoff. The road’s not great, but nothing worse than we expected. It’s the next 100km to the Mitchell Falls turnoff that will really test you.

Kalumburu Road has a reputation as one of the worst roads in Australia. We can see why. The huge corrugations are bad enough. What’s worse are the dips and washouts across the road. You simply can’t get up enough speed to get on top of the corrugations – just as you start to speed up, another washout appears.

And to top things off, the sky looked pretty threatening. We soon found out that maybe we should have taken more notice of those clouds.

Finally the turnoff to Mitchell Falls appeared on the left. A short drive in, across the King Edward River and we’d made it to the campground. And what a welcome sight it was!

The campsite is split into 2 separate areas. We chose a site near the river – absolutely magnificent and we were the only ones there when we arrived. Perfect!

We settled for a patch of grass under a tree, just a short stroll to the river. Of course the kids headed straight for the river and found an excellent swimming hole. Water flowing over rocks provided the perfect natural spa – just what we needed after Kalumburu Road.

This campground is pretty special, one of those places that’s instantly on your “favourite campgrounds” list. Like most Western Australian campgrounds, this one has a resident Camp Host in the tourist season – in our case, Bruce from Darwin. He loved the place but was pining for fresh fruit and veggies.

Quiet, peaceful and isolated… really isolated. The nearest towns are Wyndham and Kununurra at about 460km away then Derby at 580km away – mostly on dirt roads.

Two stunning clusters of Aboriginal Art are on display near the campground. Both depict a fantastic selection of both Wandjina Art (which we first encountered at Galvans Gorge) and Gwion Gwion or Bradshaw Art. For an excellent explanation on Gwion Gwion Art, go here.

By chance we coincided with a tour group who had appeared from Mitchell Falls in a 4WD bus. They insisted we join them, so we were treated to a free guided tour of the Aboriginal Art.

There is some distinctly different art, clearly painted with much darker ochre. These are 17,000 – 23,000 years old and apparently very reminiscent of Indonesian art. As there was an ice bridge between the two countries then, this is entirely possible.

Just think about this for a minute. 17,000 to 23,000 years ago… makes the pyramids, Roman conquests, birth of Christianity seem like yesterday in comparison. Especially when you realise Europe was buried deep under an ice sheet back then.

That afternoon, people started arriving from Mitchell Falls. The ranger had told them to get out or be prepared to stay for a couple of weeks due to rain.

A sign of things to come… just on dark, the heavens opened at King Edward and it poured all night.

Next time: Battling mud and how corrugations became a sight for sore eyes.

Download “Gibb River Road – A Traveller’s Guide” for info on what to see, road conditions, fuel and much more.
…at our FREE RESOURCES Page!