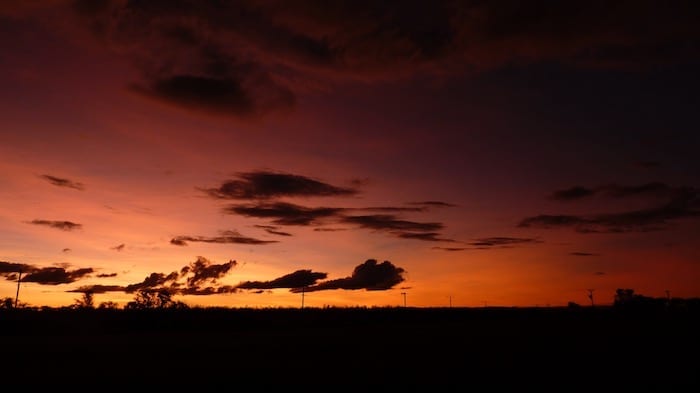 Kicking Back In Kununurra

Last time, we had a muddy drive from Drysdale River Station into Kununurra. Go here if you missed it.

You know when you drive into a town and think, “I like this place, this’ll do me”? Well, Kununurra is one of those towns. The people are friendly and the place has a relaxed, easy-going atmosphere.

It was created in 1961 as a service town for the nearby Ord River Irrigation Scheme (ORIS). So the town is relatively new and it shows – neat and tidy with modern services. Kununurra is a stark contrast to the ancient landscape on which it sits.

Growing crops in the Ord Scheme proved challenging, with extreme temperatures and pest swarms wiping out crops. As just one example, rice was a promising prospect until huge flocks of wild geese discovered the rice crops and stripped them bare.

Over the years, farmers have experimented and found alternatives such as sandalwood plantations and sugar cane to be more suited to the local environment. There are a variety of other crops like watermelons, pulses (e.g. chickpeas), bananas, mangoes and citrus.

As for politicians endlessly promoting the Ord as the next foodbowl… well maybe they should get their minds around the challenges of growing crops in such an extreme environment before getting too carried away.

Keeping The Weeds Out

Kununurra has a Quarantine Station for livestock entering the Kimberleys from the east. Cattle are inspected for cattle ticks and the trucks are washed down to remove any weed seeds.

Once cleared, the cattle are re-loaded and continue their journey. Consequently, large livestock road trains are a common sight on the edge of town.

Travel north on Ivanhoe Road for about 15 minutes and you’ll reach Ivanhoe Crossing. This causeway was a part of the old road to Wyndham. In the Dry season, you can still cross here. We visited the crossing just after the Wet season. The water was about half a metre over the causeway and flowing strongly.

The drive out to Ivanhoe Crossing gives you a sense of why the ORIS is here. The soil is so rich, it looks like mud cake. Add water and you potentially have the ingredients for productive land.

Just a few minutes out of town is Mirima National Park, otherwise known as Hidden Valley or the Mini Bungle Bungles. Layers of different coloured sandstone have been stacked upon each other then eroded to striking effect.

The cliffs of Mirima NP bear a striking similarity to the Bungle Bungles in Purnululu National Park, hence the name “Mini Bungle Bungles”. They are like a pocket-sized version of the real thing. Several short walking trails allow you to wander through the valleys and climb the ridges to take in spectacular views.

Home Away From Home

We based ourselves at the Big 4 caravan park. Thankfully they have lots of shady trees  – although we were treated to some heavy rain most days. The Wet season had decided to linger into late May. The locals were commenting how it felt more like the build-up to the Wet Season – unseasonably hot and humid. We were relieved when the heavens finally opened for one final burst and the weather dropped back to balmy days and cool nights.

One young couple had encounters with nature they probably could have done without. One day they had a tree snake under their tent. The next day a bird dropped out of a tree and fell right between them – stone dead!

On a more serious note, two young men were riding motor bikes for a charity and were camped near us. Just after dark we heard a loud whistle, then a whoosh. Instantly their gas bottle and the surrounding area were covered in flames. A quick-thinking camper grabbed a fire extinguisher and had it out in no time.

Fortunately they only had superficial burns. With their tent and a jerry can filled with petrol close by, the outcome could have been much worse. It just goes to show how careful you have to be when cooking with gas whilst camping.

We ran into Len, who we had met at Drysdale River Station. Len was going back to Lake Argyle and offered to show us around. We appreciated the offer  – it’s always good to have some local knowledge.

We have fond memories of Kununurra and look forward to returning in the near future.

Next time: Wydham, where the Five Rivers meet.