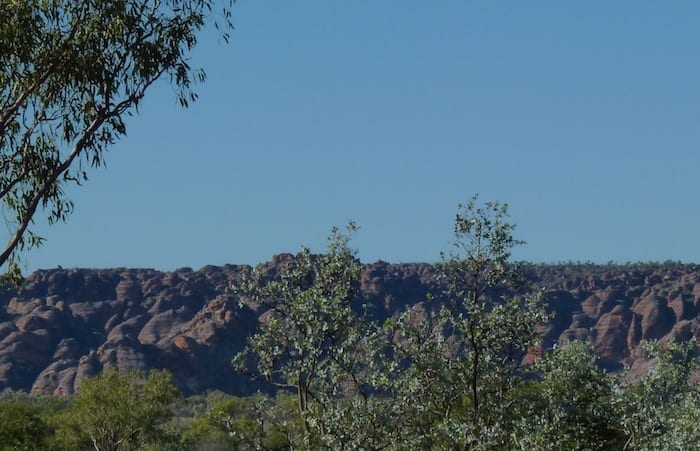 Purnululu National Park is about 300km South of Kununurra.

Follow the signs to Halls Creek via the Victoria Highway, then the Great Northern Highway. The scenery is dominated by a continuous spectacle of rugged mountain ranges off to your right.

After about 250km, you’ll turn left onto Spring Creek Track.

This is a slow drive. Although it’s only about 50km long, allow a couple of hours. The track is slow and windy. Take care at the creek crossings as they can be quite deep. And watch out for approaching traffic on the blind crests.

We entered Purnululu National Park with a sense of anticipation. The Bungle Bungles is one of those places we’d heard so much about. At last we were here!

At first you’ll see a hazy mountain range. Then as you approach, it begins to take shape. Those trademark layered patterns emerge then you’ll start seeing a few of the famous beehive domes. Amazing!

We camped at Walardi Campground. It doesn’t really matter which one you stay at, you’ll have to drive to the various walks and gorges. Walardi does have designated generator – and more importantly, No generator – areas.

How Were The Bungle Bungles Formed?

Between 374 and 350 million years ago, layers of sediment were deposited to a depth of about 7km. This area was then uplifted and exposed to the elements.

Over time, cracks developed in this massive slab of sandstone. Wind and rain eroded these cracks to form the landscape you see today.  Some of the cliff walls are over 250m high – that’s a lot of wind and rain…

The distinctive bands were formed from different types of sediment, with varying combinations of clay, sand, rocks and minerals.

The orange bands contain higher levels of iron. The iron oxidises (rusts) and forms a protective skin. The grey bands contain a cyanobacterium which is attracted to the more porous (and wetter) layers of sandstone. These little fellas form bands up to several metres wide (high) but only a few millimetres thick. Again, these bands act as a protective skin.

Just a word on cyanobacterium.

They are single-celled organisms, one of the most basic forms of life you can get. And they’ve been around for a while… their fossilised descendants have been found in rock over 3.5 billion years old in Western Australia. So it’s probably fair to say they’re in it for the long run.

So, there you go!

We did three walks. The first was through Mini Palms Gorge.

Now we’re not quite sure where the “Mini Palms” part of the name comes from. “Ridiculously Tall Palms” or “Massively Giant Palms” would have been more accurate. Maybe someone had a sense of humour…

You walk along a hot, dry creek bed for a while then head into a wide gorge filled with some of the tallest palm trees you’d ever hope to see, and huge sandstone cliff walls. The contrasting colours take your breath away. And the scale of it!

From a distance, you think, “Wow, this place is huge”. But the detail gets lost. Only when you’re walking through it, does the enormity of this place hit you between the eyes. Everything is big – impossibly tall palms, sheer cliff walls and huge boulders of conglomerate rock just lying around everywhere.

You slowly climb up through the gorge. Thankfully, steel stairs make the journey much easier… although it is fun clambered over, under and around some of the bigger boulders. The sides gradually move closer together until you reach a cavern at the end, bordered by massive sandstone walls on 3 sides.

The walk back is just as spectacular. You get another perspective, seeing the enormous sandstone walls gradually opening out to form a small valley of sorts.