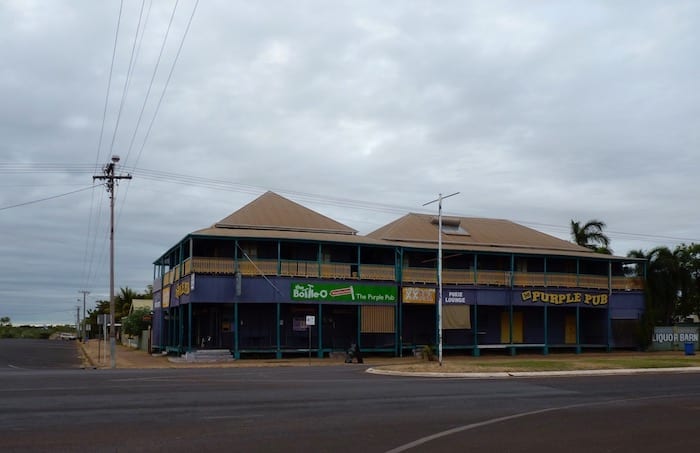 Roadtrains, Dust And… What, No Coffee?!

Last time, we had a break at Adel’s Grove, a delightful oasis.

Pipes To The Gulf

Leaving Adel’s Grove we headed to Gregory Downs then to Burketown and ultimately Normanton. A little way past Adel’s Grove is the Century Zinc mine.

Zinc mined at Century is transported to Karumba, not by road or rail but by pipeline. Zinc and water are mixed to form a slurry then the slurry is pumped 300km. A clever solution.

2018 Update: The Century Zinc Mine is no longer operating.

The road is pretty good but very dusty and quite stony in places. For whatever reason, this road seemed to attract idiots in 4WDs who were determined to drive at warp speed in the other direction. Of course, none of them slowed down so we were showered with stones. I was pretty cranky by the time we pulled into Gregory Downs.

Gregory Downs Roadhouse is located at a four-way junction:

So Gregory Downs Roadhouse is actually quite busy – lots of roadtrains and travellers. “Busy” is a relative term in these parts. When we first arrived, we were the only vehicle around.

The Roadhouse is great, it has lots of character. They’d run out of coffee – NOOO!!! – so were quite happy for us to boil the billy outside on one of their tables. We don’t go anywhere without coffee…

We continued North to the Savannah Way and Burketown, about 120km through prime black soil country. This is Channel Country – wide open savannah plains and plenty of beef cattle.

A Waterfall Beside The Road

The road from Burketown to Normanton is tar to Leichhardt Falls. Burketown is the oldest town on the Gulf, on the banks of the Albert River and prone to flooding.

We had been to Leichhardt Falls a few years earlier in October. Then, it felt like we had driven into a furnace with the heat radiating back up from the bed of rocks. This time was more pleasant. It was July and they’d had a particularly good wet season. So the temperature was cooler and the falls actually had quite a bit of water. Several travellers were free camped around the Falls.

From there to Normanton, the road was mostly dirt with hundreds of dips. Some were pretty severe, so you’ll need to be on your toes.

Missed It By That Much…

Just after Leichhardt Falls is Camp 119. This is the Northernmost point of the Burke and Wills expedition. From here, Burke and Wills walked towards the coast but couldn’t get through the maze of mangroves. The best they could do is taste the salt water and watch the tide ebb and flow, to confirm they’d indeed reached the coast.

A monument near a blazed tree lists the date of their arrival as 9th February, 1861.

Think about that date for a minute. February is wet season. Clearly, wet season usually means lots of rain, heat, humidity and mozzies. Not only that, the endless black soil plains we had driven over turn to mush at the slightest sniff of rain.

So it’s hardly surprising Burke and Wills suffered terribly up here. Their dairy entries speak about trudging through sticky mud, being constantly wet and provisions going mouldy. They had camels and a horse. The camels were completely unsuited to mud – they are built for sand and deserts. It was agonising for both man and beast.

This expedition was doomed to failure from the start. Mistake after mistake sealed their fate. Why anyone would ever consider walking through this country in the wet season defies logic.

A Gigantic Croc, A Purple Pub And Amazing Sunsets

We pushed on to Normanton, named after the Norman River. We liked Normanton. It has a friendly feel and the residents are relaxed and welcoming.

The caravan park is basic but has all amenities you’ll need – although the pool was absolutely freezing! It’s opposite the Purple Pub, one of the famous Australian pubs. The Purple Pub is famous because… well because it’s purple. We had dinner there, a great feed.

A monument to a gigantic saltwater crocodile sits in the main street. This life-sized model is actually to scale. At 8.63m long, it was shot by a professional hunter in the 1950s and has a spot in the Guinness Book Of Records. This thing is massive.

Talk a stroll through the Burns Philp building. It harks back to the days when your local supplier had everything you needed in the one place. Inside are some fantastic photos of recent floods, showing Normanton from the air as an island in a huge sea.

And if you feel like a drive (and who doesn’t!), go out to Karumba. It’s an easy 70km drive and well worth the trip. Karumba is a mecca for fishing fanatics (which we’re not) and can be packed during fishing season.

The sunsets are unbelievable and you can get a beautiful feed of fresh seafood while you gaze out over the water.

Normanton is the Western terminus of the Gulflander. This quirky train  runs from Normanton to Croydon in the East, a distance of about 150km. It was built around 1890 and was never connected to the Queensland rail network.

Enthusiasts restore and maintain the line and the train. It runs as a tourist attraction and by all accounts, is very popular.

There are lots of things to see and do in the Gulf country. Just be prepared for some rough roads and big distances. Oh, and don’t follow Burke and Wills’ example – wait until the wet season is well and truly over before you try to travel through this part of the world!

If you’re interested in organised tours of the Savannah Country, you’ll find a good deal at TourRadar.

Next time: Taking The Burke Developmental Road through to Mareeba – remote travel at its best!