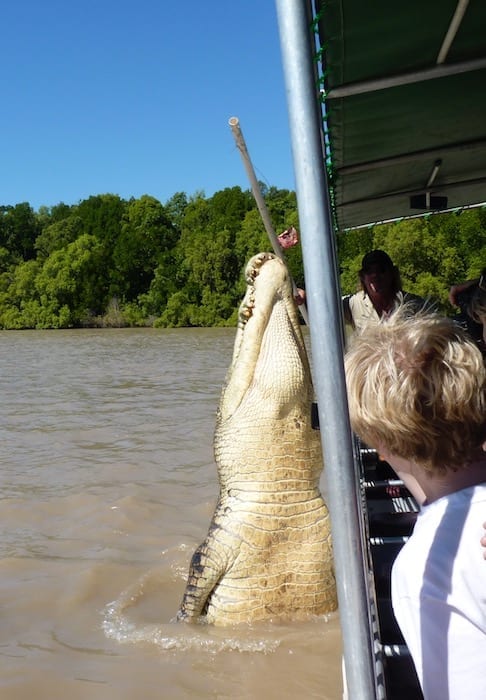 How To Avoid A Deadly Encounter With Saltwater Crocodiles

Saltwater crocodiles – or salties – are big and mean and hungry. They are survivors and supreme hunters. Salties have thrived for millions of years, virtually unchanged. So they must be doing something right.

Saltwater crocodiles patiently watch and learn. So a croc will observe and learn when for example:

Salties have attitude. Lots of it. It’s almost like they have a chip on their collective shoulders – them against the world.

Why do I say this? Well, every part of a salty is designed for killing:

So don’t mess with them. Just don’t. And the scariest part?

Just because they’re called “saltwater” crocs, don’t think they only live in salt water. Oh no, they’d be happy in a bathtub full of bubble bath if it came to that. They love freshwater creeks and rivers. They’ll swim hundreds of kays up a fresh water creek in the wet season, find a comfy waterhole and stay there.

Just because they’re called “saltwater” crocs, don’t think they only live in salt water. Oh no, they’d be happy in a bathtub full of bubble bath if it came to that.
Click to Tweet

So be careful. That pristine inland billabong might just be home to nature’s ultimate killing machine. You really don’t want to end up on a salty’s dinner menu.

But some people never learn. Could be the “it won’t happen to me” mentality, ignorance of the danger or just plain stupidity. Who knows. The point is, be very careful when you’re in croc country. Salties don’t give you a second chance.

This gentleman seriously has a death wish.

Just a few days before this photo was taken, a photographer was showing us a series of amazing shots he had taken in this very pool. It started with a 3m long croc grabbing a huge barramundi. Then a much bigger croc started attacking the “smaller” croc, biting until the barra wriggled free. Then the bigger croc swallowed the barra whole!

Now what exactly has this man done to ensure he’s on the menu? Well, this is the perfect spot for a hungry salty to find a feed. The causeway drops away sharply into a deep pool, so a salty can easily swim to within a few feet of the causeway then launch itself out of the water.

Secondly, the water is murky, so it’s not easy for the man to see what’s under the water – especially on a sunny day with reflections off the surface.

Thirdly, lots of people walk across or fish off this causeway. Remember what we said earlier about crocs learning? Well, this is a perfect example.

Finally, everyone knows crocs live in this pool. So why tempt fate?

So going fishing off a causeway in a croc-infested river takes out first prize in the race to prove Darwin’s theory of natural selection.

#2. Don’t Go Swimming At Night In A Billabong

Several years ago, a young lady from overseas was part of a tour group in Kakadu. You know, one of those tours where you sit on a bus all day, jump out to see some random tourist attraction, sit on a bus a bit more, then get to a campground and drink all night until it’s time to get on the bus again. Sort of like an outback pub crawl without the pubs.

Now the “tour guide” must have thought he was Crocodile Dundee. Our hapless heroine asked the tour guide if she could go for a night swim in a nearby billabong. Seemed like a great idea after a few drinks – hot night, pristine billabong in a beautiful location. You get the idea.

And this is where the story gets strange. The wet season had just ended. The tour guide surely must have known about crocodiles. But he said yes!

So off she went, never to be seen again. Not a yell or a scream, nothing. Just vanished silently without a trace.

Remember, crocs can jump out of the water… a long way. Don’t believe me? Have a look at this photo.

Now, sitting in a tree branch overhanging the water on a balmy tropical night… toes dipping in the water… gentle breeze coming off the water after a hot day… might sound like heaven on earth. But if there are crocs about, it’s really not a good idea.

Once again, a crocodile will observe and learn. To them, you’re food. Plain and simple. A croc will think nothing of launching itself at you, dragging you under and giving you a thorough death-roll before eating you.

Other Ways To Avoid Being Meal Of The Day

If you’re really insistent on getting eaten by a salty, then you might like to completely ignore the following tips.

Typically these signs are posted for a reason. You can choose to ignore them – but only if you like sharing the water with salties.

2. Don’t Be a Backpacker

Backpackers seem to be particularly tasty. Saltwater crocs love them!

Think about it. Lots of food (fish guts), people doing predictable things (remember what we said about crocs observing and learning), usually deep water up to the edge of the boat ramp – a perfect environment for a salty to hunt in.

Salties love to swim in the ocean. And they’re happy to swim long distances. While it’s pretty unlikely you’ll be taken by a croc off a beach, they do swim past from time to time. So apart from deadly Irukandji (an extra-venomous type of box jellyfish), salties just might add to your challenge of surviving a tropical swim.

5. Don’t Hang Out In Mangrove Swamps

Crocs just love mangrove swamps. Why? Well, they’re perfect hunting grounds – plenty of cover, murky water and poor light. And crocs use mangroves for breeding grounds and to lay their eggs. So if you enter a mangrove swamp in crocodile territory, you’re truly in their backyard.

This probably seemed like a good idea at the time. You know how it goes, “She’ll be right. I’ve driven over here a thousand times. It’s only a bit of water”. I just wonder what was going through their minds as they clambered out of the cab and frantically swam for their lives…

Humans and saltwater crocodiles can co-exist. You just have to remember you’re in their territory. Use commonsense. If you are near a river or thinking of having a swim, assume crocs might be in the water.

Salties are magnificent creatures. Take the time to appreciate just how long they’ve been on earth, their awesome power and how they’ve developed into such perfect killing machines. Just do it from a distance.

Use your head when in crocodile country. If you don’t, you might lose it.

If you’d like to see saltwater crocodiles up close, TourRadar offer several deals which might interest you.

1. How Fast Can Saltwater Crocodiles Swim?

Pretty fast! They can swim up to 25 -30km/h in short bursts. The scary part is, this is about 3 times faster than a strong human swimmer.

When they’re just cruising along though, saltwater crocodiles can sustain speeds of around 5km/h. This is about the same speed as a human’s walking pace.

2. Can A Human Outrun A Saltwater Crocodile?

In theory, yes. A crocodile’s maximum speed on land is less than 15km/h and only for a short distance. A reasonably fit human can run at about 20km/h, probably faster if a croc’s chasing you!

3. What Is The Diet Of A Saltwater Crocodile?

Anything that moves. They are carnivores and will eat anything from fish to cattle, seals, pigs, humans… anything that breathes is a candidate for a saltie.

4. Can Saltwater Crocodiles Live In Salt And Fresh Water?

Definitely. They have no problem living in fresh water. They’ll swim in the open ocean for great distances as they move between breeding grounds and rich hunting grounds. However, they’ll happily live in fresh water for extended periods of time.

5. How Long Do Crocodiles Live For?

Saltwater crocs can live for 65 to 70 years in the wild. There are examples of them living to over 100 years in captivity, but they’re unlikely to live this long in the wild.