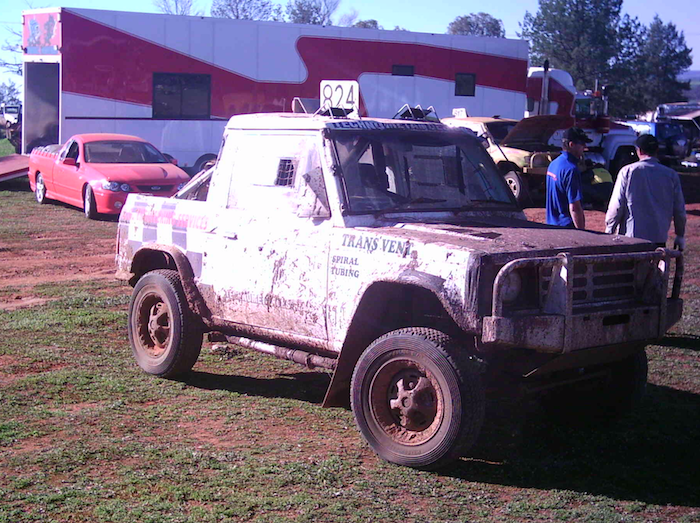 Pajero Ute On The Race Track

Imagine you’ve just built a race car, but you’ve never actually driven one competitively. Well, this is where Dave was at.

Dave hadn’t actually driven in a cross-country event before his ute was built. So he entered a few AMSAG short-course club events to get a feel for it.

After a few of these events, he dived in the deep end. The Condo 750 beckoned. Condo 750 is a great event, a favourite amongst off-road drivers and bike riders alike. Based in Condobolin NSW, it is run over 2 days. It covers 750km of racing, ranging from open flat tracks to rocky, scrub-covered ranges with no discernable track at all.

Even now, it is still one of the signature events for the Denhams. Dave had been going since he was a teenager, servicing for Terry Denham.

Being such as short wheelbase, the ute was pretty twitchy. Still, Dave managed to have heaps of fun and kept it upright. The biggest achievement was crossing the Finish line. Attrition rates of 50% or more are not uncommon in cross-country events.

Unfortunately, the ute was badly damaged after a high-speed rollover at Griffith NSW in September 2005. They did get it back on its wheels and finish the race, but the ute was pretty bent.

Dave parked it in the corner of his workshop. After several months, he came up with a plan.

The original ute was twitchy and tended to buck and pitch. So he added 300mm to the chassis behind the cab. Of course, one change always leads to many others – longer tailshaft, relocate the fuel cell, rewiring, re-spray and so on.

The extra 300mm allowed Dave to lengthen the rear trailing arms. This would hopefully settle the ute and make it more driveable.

One bonus was the rear panel work. With the extra 300mm, the rear panels from the Denham’s Triton fitted perfectly. These panels are fibreglass mouldings, so getting hold of a couple wasn’t an issue.

By early 2006, Dave’s extended ute was ready. The longer wheelbase made a difference. It handled better and more predictably than the shortie. Dave and his navigator Kevin competed in the 2006 Condo 750 and finished, despite breaking a front tail shaft and losing their trip meter early in the event.

However it just didn’t feel quite right at the back. Dave tried a few things – a slightly wider wheel track, better springs and specially tuned King shocks. These changes transformed its handling. But with better handling comes higher speed. Not always a good thing…

Motor racing can be cruel, as Dave was about to discover.

Dave and his navigator Kevin were feeling really good about this version of the ute. They’d completed a few stages of the 2007 Condo 750. With the new King shocks, springs and wider track, it just felt so settled.

However, a tight windy track through trees brought them unstuck. The track veered left then right between trees. Going into the second bend a bit too quickly, the back started to drift out. Dave gassed it to straighten it up. It was going to be tight, but it should have been okay.

The ute had other ideas. As soon as Dave planted his foot, the tyres bit and speared the ute straight off to the left. Normally it would have settled and powered on towards the right. Maybe an axle broke… who knows.

A head-on crash into a gum tree was the result. The ute climbed straight up the tree, snapped the tree off then rolled end-for-end.

Fortunately both driver and navigator were okay. The ute however, was a write-off. It had landed heavily on its roof. The chassis was creased and twisted, engine mounts snapped off, most body panels and cab shell destroyed, the whole front end twisted and wrecked… but the roll cage had once again done its job and cocooned Dave and Kevin from any injury.

Yes, the roll cage was bent but it had done its job.

Where to now for Dave? Well, he wasn’t done with off-road racing just yet…

Next time, Dave comes up with another plan. Something more conventional… sort of.