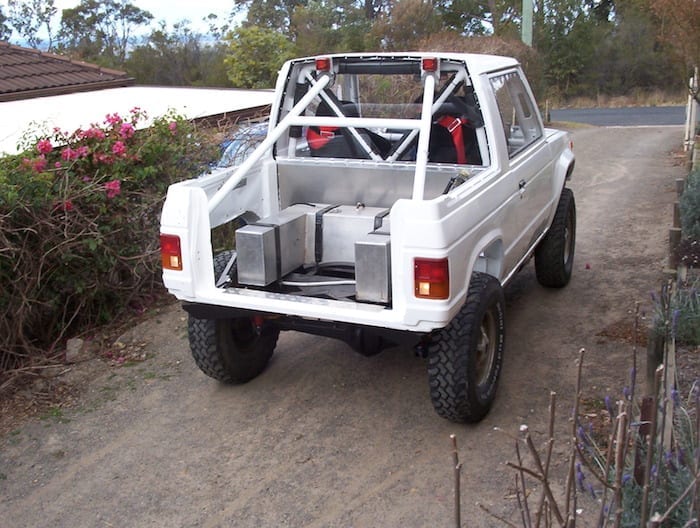 A Pajero Ute Is Born

Last time, we learnt how Dave Glazier was infected by the cross-country racing bug. Go here if you missed it.

Since you’re reading this, chances are you’re a bit of a Mitsubishi nut.

You’re not alone. Mitsubishis are popular in off-road racing… simply because of their hard-earned rally pedigree. They have proven themselves over and over.

Mitsubishi made their name in the Paris to Dakar rally. Go here for a fantastic summary of their achievements… and some brilliant photos. From 1983 to 2007 they won Dakar a record-breaking 12 times.

Therefore Mitsubishi is a big deal in the off-road racing world. Ralliart was at its peak in the 1990s and technology from Dakar was filtering through to production vehicles. This was reflected in the Australian off-road scene, with Pajeros featuring prominently.

The Seeds Of An Idea

Fast forward to 1999. David Glazier was still heavily involved in cross-country racing and still servicing for the Denhams.

This was no ordinary Pajero.

It was loosely based on a 1985 two door Paj, but had a Ralliart chassis that Terry had bought. He had then stretched his old Pajero body to suit the chassis. Ralliart fibreglass moulds for the panels completed the picture. The end result was similar to the ’85 Paj in the above photo.

This presented some challenges. The body and chassis were 150mm longer than factory standard. And the chassis was unrepairable.

Fortunately, Dave had a wrecked Range Rover chassis, complete with suspension and diffs. Being a (thankfully now reformed!) Land-Rover tragic, he’d had plans to use some of the Range Rover parts on his Series I Discovery. This plan had never eventuated.

Dave was operating on a shoestring budget, so he decided to innovate. Why not combine all the parts he had and make his own off-road race car? After all, Dave’s intention was always just to have fun. It was never about trying to win.

With coil springs all around and large 4 wheel disc brakes, the Range Rover became the basis for a cross-country race car.

A Rare Combination Of Motor And Gearbox

The next stroke of good fortune was with the engine and gearbox. Both had done many hard hours racing and had never let Terry down.

The motor was a 1990 4 cylinder 2.6L Mitsubishi G54B. It was a turbo motor specially built for Dakar by Ralliart… one of only 200 ever built. In original Ralliart Dakar spec, it was rated at 330hp.

As an aside, Terry bought the motor because the original owners couldn’t get it to run. The factory computer just wouldn’t co-operate. Not one to take no for an answer, Terry and a mate fitted an aftermarket Haltec computer. After much trial and error, the motor came to life.

This was a major achievement, considering electronic control was cutting edge technology at the time.

The gearbox Dave inherited was another rare specimen. Built in the late 1980s, it was a hand-built Holinger 5 speed in a Mitsubishi casing.

In all the years it was mercilessly flogged, this gearbox only had one small failure very early in its life – one dodgy bearing. When Terry ordered a new bearing, Peter Holinger (the founder of the business) refused to accept payment. “My gearboxes don’t fail”. He was right. Some 30+ years later, it’s still running like new.

Both motor and gearbox would not be out of place in a motor museum.

Tyres are an expensive “consumable” item on an off-road race car. It’s not uncommon to chew out a set in one day. Further, they need to have impenetrable sidewalls to withstand stakes and sharp rocks at high speeds. So, they’re expensive…

The Denhams had some old tyres that were worn but still useable. Since Dave wouldn’t be doing the insane speeds of the frontrunners, these second-hand tyres were perfect for him to use. Problem solved!

Not content with building a unique “Rangero”, Dave took his concept one step further. The Pajero ute was born!

Utes make a lot of sense for this type of racing:

After thousands of man-hours and lots of creative thinking, the Pajero ute came to life. It was ready to race!