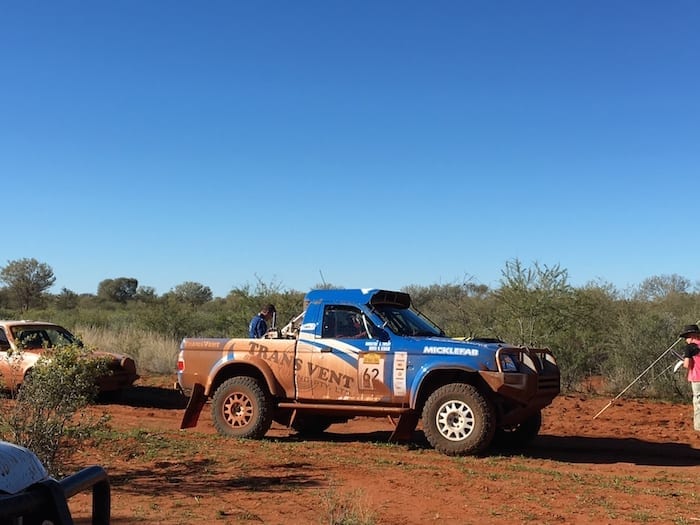 Dave Gets The Racing Bug

Growing up, David Glazier was good mates with Warren Denham. Warren’s dad Terry had (and still has) a passion for cross-country racing. Terry had many successes in his racing career, often finishing at the pointy end of the field.

It’s very much a part time affair. All crew members are either family or mates. They get to experience some truly spectacular places in Australia, while doing something they love.

In the ’80s and ‘90s, Terry raced Holden Jackaroos and Pajeros. Believe it or not, Jackaroos were a popular cross-country vehicle back then.

Terry’s most recent cars were a Mitsubishi Pajero Evo, then a purpose-built Triton. The Evo first appeared in the early 2000s, heavily modified for racing.

The Triton was developed in 2007. It was built to win the Australasian Safari. Gavin Mickle (Micklefab Engineering) built it from the ground up, with lots of input from the Denhams. This vehicle is the culmination of years of knowledge gained from racing.

Both vehicles are still racing. Warren races the Triton. It’s still competitive and continues to be developed. An original top speed of 200+ km/h has been trimmed to 185km/h for safety, the original 5 speed NM Paj gearbox and transfer case has been replaced with a 6 speed sequential, tweaks have been made to the cooling system and so on.

However, it still uses stock-standard Pajero diffs, CV shafts and Pajero suspension cradles with modified arms for greater wheel travel. It’s unbelievable how much punishment standard Pajero parts can cope with – especially when you consider they are dealing with over 300kW of power and 1,000+Nm of torque at the wheels.

Up until recently, his younger brother Mike was racing the Evo. The Evo’s now semi-retired, occasionally running in a Twilight RallySprint series in Sydney. Mike has graduated to a wild trophy truck.

So where does Dave fit into this?

Well Dave and Warren were the Service Crew for Terry. They started in the 1980s while still teenagers. Younger brother Mike Denham was Terry’s navigator.

The Service Crew has grown over the years and Warren has moved into the driver’s seat of the Triton. But even now, Dave’s still an important cog in the Denham clan’s cross-country racing adventures.

Dave quickly learnt what cross-country racing is about… working all night on a broken vehicle, snatching an hour’s sleep, then driving for hundreds of kilometres to the next Service Point. Repeat until the race finishes… or the car breaks.

He also learnt what the weak points of a vehicle are, what parts break, where cracks appear, how to strengthen a car without adding too much weight, tricks to maintain a low centre of gravity.

Probably most importantly though, Dave learnt how to improvise… how to get a broken vehicle going when you’re in the middle of the outback, without the right parts… how to modify a part from another vehicle and make it work on yours… how to diagnose an issue without the right tools.

With all this knowledge, Dave had a dream to build his own cross-country vehicle.

But what to build? As you’ll see next time, Dave decided to try something different – very different.