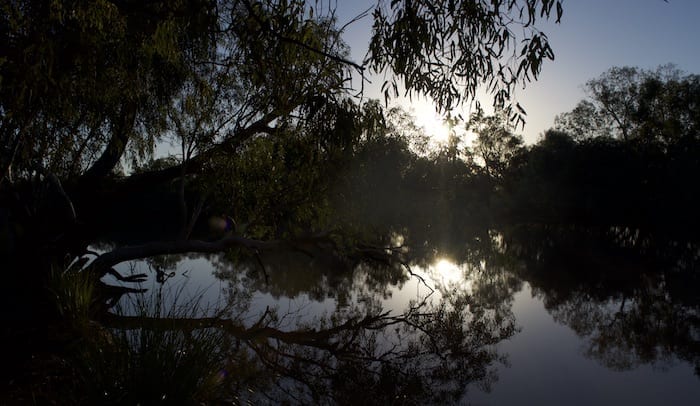 We woke up way too early, with sunlight blasting into our camper. Normally I’d grumble and curse and pull the blankets over my head. But this morning was different.

Yes, the sun’s first rays were burning holes through my sleepy eyeballs. But the sunrise! The sun was pushing through the trees on the far bank of the Paroo River. The horizon was banded with brilliant pink and purple colours and the white gums along the river bank were reflecting these colours.

Just a few minutes later, the sun had broken out over the top of the trees and it was all over. Then it really was time to pull the blankets back over my head!

We were camping on the Paroo River in Currawinya National Park. Currawinya is in Western Queensland, just up the road from the village of Hungerford. In turn, Hungerford is right on the state border with New South Wales.

In fact coming from NSW, you have to get out and open the gate on the border. Don’t worry, Queensland hasn’t decided to build a wall (yet!).

It’s part of the Wild Dog Fence (formerly Dingo Fence), built in the 1880s to keep dingoes out of southern Queensland. Dingoes were decimating mobs of sheep on the huge grazing properties, so the decision was made to build a fence to keep them out.

Not just any old fence, rather 5,600 km of fence all the way from the Eyre Peninsula in South Australia to the Darling Downs in South-East Queensland. Now that’s what I call a fence!

Go here for your complete guide to Currawinya National Park… what to see, where to stay, what drives to take and more.

Camping On The Paroo River

Corni Paroo Waterhole camping area is about 40km North of Hungerford. It stretches for several kilometres along the western side of the Paroo. You’ll have no trouble choosing a site right on the banks of the river, completely secluded from other campers.

Remember even if it’s busy, this is not the sort of place where people come to camp and party all night. It’s a long way from anywhere, so you’ll normally only find like-minded people here… those travellers who actively seek out seclusion.

The Paroo is one of the few remaining rivers not affected by irrigation and water rights. Of course, many years of grazing have changed the landscape, but the Paroo itself has been largely left alone.

We made our way to the Paroo from Louth. For details on Louth, go here. The roads varied from flat smooth roads across giant floodplains to sandy red soil roads pushing their way through sand dunes. Nothing a well-equipped 4WD couldn’t handle with ease. The scenery was ever-changing and quite spectacular at times.

Old Men Of The River

A feature of the Paroo is the white river gums. Twisted into impossible shapes, these gums look like they’re trying to reach down and touch the water.

Some of them are obviously ancient and most probably pre-date colonial occupation. They stand like sentinels along the river banks, quietly guarding the river.

We arrived after a dusty drive and it wasn’t long before we decided to take a refreshing dip in the Paroo. At first it’s a little off-putting as you slide into the brown water down a slippery bank. Not being able to see what’s under the surface played havoc with our imaginations!

Ah, what a brilliant swim! The muddy waters feel like you’ve had a full-body mud pack. Not that I’ve ever had a full-body mud-pack, but you get the idea… So refreshing and the perfect tonic for sore limbs after a day on rough roads.

A Long Drop Toilet and… Not Much Else

There’s a long drop toilet when you first drive into the camping area, but after that you’re on your own. You could always drive to the toilet but we were several kilometres along the river, so we used our own.

A Porta-Potti would be a wise investment. You have to be fully self-contained so make sure you bring plenty of food and water.

And remember, dispose of any soapy water well away from the river. Better still, take an old container for your soapy water then take it out with you when you leave. Sooner or later you’ll find a dump point in a town to dispose of it properly.

The Silence is Deafening

This place is simply magic. Even on a hot day, you’ll get a refreshing breeze off the river. There’s plenty of shade… and best of all is the silence. When the breeze drops after dark you’re surrounded by all-encompassing, ear-ringing silence. Paradise.

You’ll find plenty to do. Explore Currawinya National Park, throw a line in the river, swim and canoe or kayak along the river. You could easily spend a day just exploring the river on a kayak.

If you’re feeling lazy, find a shady tree, pull up a chair and watch the birds, lizards and insects doing their thing on the river.

And don’t forget to watch the sunset. It’s just as spectacular as the sunrise, at a much better hour of the day!