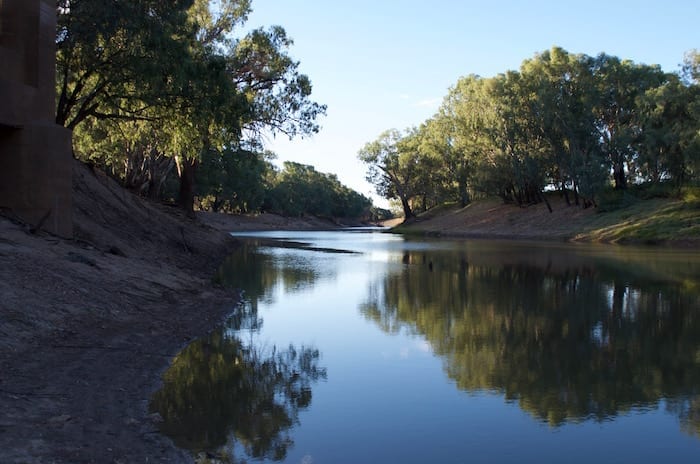 A Small Dot On The Map

Banjo Paterson and Henry Lawson could never have imagined how ingrained the Outback would become in the Australian psyche — even though most of us live in cities on the East Coast.

Paterson and Lawson were largely responsible for romanticising the struggles and adversity faced by colonial settlers. And somehow, their iconic images have stuck in our minds.

We chose Louth as our destination on the Darling. 865 km from Sydney, 99 km from Bourke to the North-East and 132 km from Cobar to the South. So Louth’s certainly out there on its own…

In the 1850s paddle steamers were a vital form of transport. Huge sheep stations like “Toorale” and “Dunlop” were shearing up to half a million sheep between them. The only practical way to transport all the wool bales was via the river. And don’t forget, these huge sheep stations needed enormous quantities of supplies to keep them going.

In 1859, an enterprising Irishman Thomas Matthews opened a pub at Louth. He catered for the river traffic, travellers and Cobb and Co wagons that followed the Darling. A small settlement grew and Matthews named it “Louth” after his home county in Ireland.

Pretty soon a port was established. Louth grew into a critical port for the local pastoral industry. Copper mined in Cobar was overlanded to Louth then loaded on river boats for the Southern cities.

I don’t even want to think about the hardships involved for the men tasked with transporting the copper on bullock drays, at the height of summer. With temperatures regularly in the high 40s (Celsius) and little water between the two towns, this work was not for the faint-hearted.

The 1920s heralded a new era for transport. The First World War had brought advances in technology and trucks rose to prominence as the preferred means of heavy transport. River boats couldn’t compete with trucks, so the Darling was no longer needed as a transport route. For towns like Louth, this spelt their demise.

Now Louth is a settlement of about 40 people, still hugging the banks of the Darling and still providing basic provisions for local graziers and travellers. However the ghosts of Louth are still there.

You can stand on the river bank and almost see the bustling port and river boats slowly towing huge barges, bursting at the seams with wool bales… the bullock teams disappearing off to the West with huge teams of bullocks straining to pull the wagons through the soft ground… the flash Cobb and Co wagons rushing into town with welcome mail from afar. The romance is still there.

Shindy’s Inn is a must-see Outback pub. When we pulled up, a group of young blokes were playing pool under the front verandah. A late model Landcruiser station wagon was parked in front of the pub, with Mum and the kids having a yarn to some people on the verandah. In the back of the Landcruiser was a cage with half a dozen cackling chooks.

Across the road was a small truck with a load of stinking feral goats – the driver and his mate inside washing the dust out of their throats.

The dining room walls are covered with memorabilia – dingo traps, rabbit traps, saddles, a basket of wool hanging from the roof, an ancient swaggies bike, bullock yolks and all manner of bottles.

Perhaps the most confronting images are of huge floods. The Darling occasionally bursts its banks and spreads for tens of kilometres across the floodplains. During these times Louth sits perched on a tiny island, surrounded by a sea of brown water. Mother Nature likes to show us who’s boss every now and then…

Showers and toilets are available across the road from Shindy’s Inn. For a gold coin donation to the Royal Flying Doctor Service (RFDS), you can have a refreshing shower in modern amenities. Cross the bridge to the Western side of the river and there’s free camping under shady trees – after you’ve given a gold coin donation of course.

Set up your camp chairs on the bank and watch the bird life along the river. Late in the afternoon the light turns to that magic orange glow that only the Outback can provide. The white river gums shimmer in the light and you can look around and think, “Yep, I’m in the Outback!”

Shindy’s Inn is a short walk back across the bridge. Go over and have a feed – great pub food and typical relaxed Outback atmosphere. Don’t forget to throw a torch in your pocket. It’s a long and perilous walk back to camp if you don’t have one – there’s no street lights!

The Demise of The Darling

As you’re gazing over the Darling from your campsite, reflect on how the river was before white colonisation and compare it with what you see before you.

The first explorers and settlers often commented on the deep loamy soils and verdant stands of native grasses. One particular account of the Darling describes crystal clear water that you could look straight through and see fish swimming in the river. Gradual sloping banks were also a feature of the Darling and indeed most other Western New South Wales rivers.

The deep loam has long gone – cattle and sheep compacted the soil. So run-off into the river drastically increased. The result? Fast-flowing floods that cut down into the bed of the river, cutting through saline water tables. And steep banks, making river crossings difficult.

Carp were introduced many years ago and are aptly described as rabbits of the waterways. They’re bottom feeders and continually stir up mud. Oxygen and light levels are both impacted, making life difficult for the natural inhabitants of the river.

The final nail in the Darling’s coffin is water allocations from the river. This has been a controversial subject for many years. On one hand we need to irrigate crops, water livestock and supply town water. On the other, minimum environmental flows are needed to keep the river healthy. It seems like a balance will never be found. Meanwhile, the Darling continues to suffer. Very sad to observe.

A Glimpse Into The Past

So for a glimpse of colonial Australian history, you could do worse than visit Louth. And don’t forget to have a beer at Shindy’s Inn!

Louth is on Barundji Country.