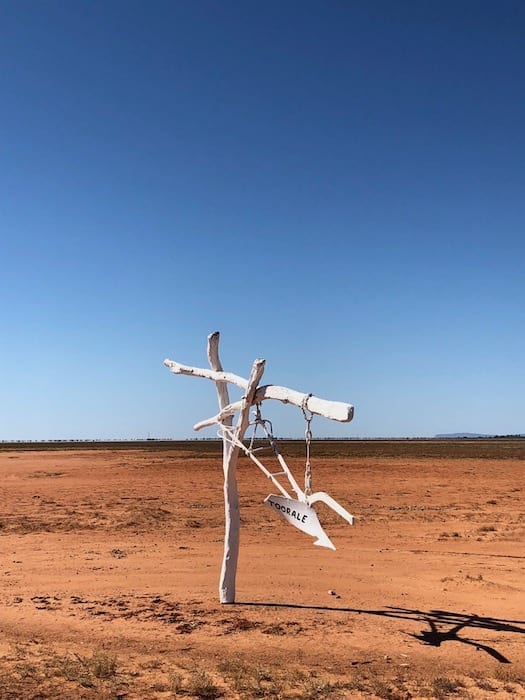 We walked into Shindy’s Inn, bought a drink and ordered dinner. The place wasn’t exactly full. In fact, apart from us there was the bloke behind the bar and an old local propping up the corner of the bar.

So we probably weren’t expecting to cause a bit of a stir. Let me explain.

Shindy’s Inn is at Louth on the Darling River in Western NSW, population bugger-all. It’s one of those places you instantly get a good feeling about.

Going back to my story. There we were, dining on a brilliant pub dinner… just the two of us, the bloke behind the bar and the old bloke having a couple of quiet ones.

Then two travellers came in. They grabbed a drink, sat down and started talking about how they’d had a big day exploring Toorale National Park. They were particularly struck by the hardships faced by the early settlers in such a harsh environment.

Now these travellers were calling Toorale “Too-Raal”. My sister had worked for a company who owned Toorale in the 1980’s and she always called Toorale “To-Rally”. So I just sat there, smugly expecting the barman or the old local bloke to gently correct these travellers on their pronunciation.

However they didn’t say anything. In fact, the barmen started talking about “Too-Raal” as well!

Hang on, what’s going on here?

We all sat there for a while, consumed by our own thoughts. Then Peta asked the barmen what there was to see at “To-Rally”. There was an uncomfortable silence. After a long pause, he corrected Peta!

“Well I dunno. The locals here at Louth have always called it “Too-Raal”. But you might be right”, the barmen replied doubtfully. Clearly he didn’t want to alienate a good portion of his patronage.

After another long silence, the old bloke in the corner spoke up. “Well, it’s like this. Originally it was called “To-Rally”. But over the years, the locals here started calling it “Too-Raal” and it’s stuck. So you’re right, “To-Rally” is what it was originally called”.

A few uh-huhs, aahs and hmms were muttered by all, then we all sat in silence for a while.

The barman, ever the diplomat, changed the subject slightly and started talking about Toorale Homestead… how it had fallen into disrepair and so on. After a while, the old local wandered off and we soon followed.

We wondered how the pronunciation had changed so much, why the Louth locals all thought it was “Too-Raal”, why my sister always called it “To-Rally” and who was actually right.

Now if any of you can shed some light on this, please let us know in the comments below. Of course, there are more pressing problems in the world. But we really want to find the answer to this conundrum.