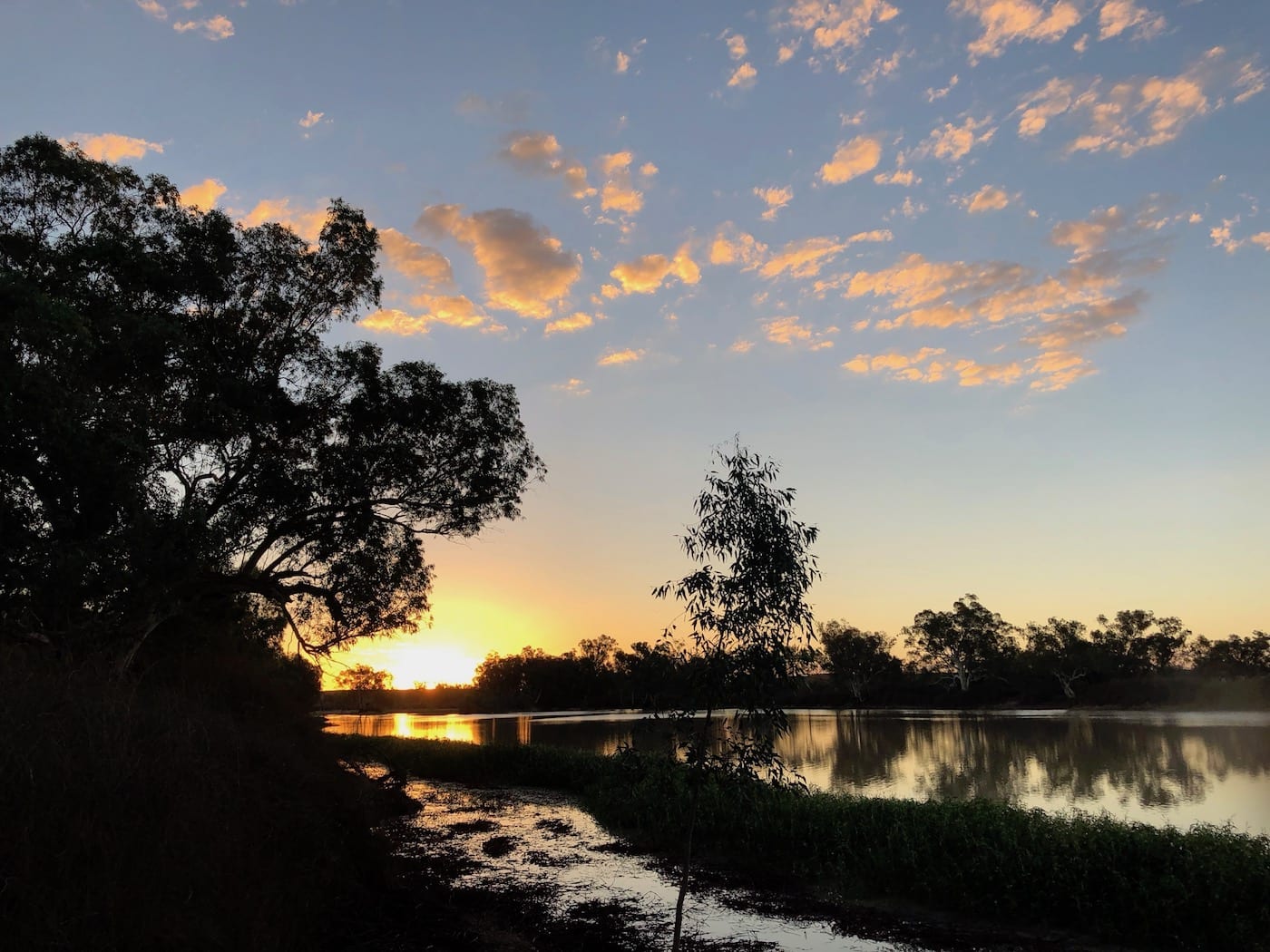 If you’re fortunate enough to see Cooper Creek flooding through the harsh Corner Country landscape, then you’ve just witnessed an incredible event. These memories will stay with you forever. You’ll have seen something that very few people get to witness, a once in a lifetime experience.

The stars aligned for us, and we were able to get out to the Corner Country and have a look for ourselves.

The Cooper Creek catchment covers a huge area. In early March, 2018 Western Queensland copped some big rains. As you can see in this article about Australia’s water catchments, the Lake Eyre Basin’s catchment is massive.

We decided to go and have a look at this rare event.

Travelling via Wanaaring, Tibooburra, Warri Gate then across sand dune country to Innamincka, the country was bone dry. Approaching Innamincka in high 30’s heat, we couldn’t quite believe a flood event was happening out here. After all, we were surrounded by vast plains covered in nothing but baking hot stones.

As you approach Innamincka from the South, you travel across a rocky ridgeline before gradually descending into the village. Across to our right we could see a line of trees marking the course of Cooper Creek in the distance. At first we thought we could see the water. However it was in fact an enormous sand bar.

We didn’t quite know what to expect at Innamincka. Cooper Creek runs just to the West of the township. Would we be able to camp there under a shady tree? After all, a late heatwave was hammering everything. Or maybe we’d camp at the Dig Tree further North-East.

Either way, we were hoping to have a swim and launch our kayak… just as we had on the Darling River a few days earlier.

It turns out we did neither. We ended up at Cullyamurra Waterhole, around 20km North-East of Innamincka.

We’d been out this way before. So when we first saw Cooper Creek at Cullyamurra Waterhole, our first reaction was disappointment. From a distance, it just looked like a huge pool… similar to what we’d seen a few years prior.

But once out of the truck and at the water’s edge, we could clearly seeing Cooper Creek flowing. In fact it was flowing strongly.

The proprietor at Innamincka Store had warned up to take care if we decided to swim, as a secondary flow was due any time. However, just one glance at Cooper Creek and we decided there was no way we were going to swim or kayak in there. The current was simply too strong.

So we set up camp, sat back and took in what we were seeing.

We were witnessing something unique. Being brought up in South-East New South Wales, a flood normally means raging torrents, lots of noise, fast flows and lots of damage to the river banks. However this was completely different.

Once you look at Cooper Creek for a while, you realise the volume of water passing by is massive. Cullyamurra Waterhole is over 100 metres wide and an extraordinary 28 metres deep. It’s a silent flood, flowing relentlessly towards Lake Eyre.

And the contrast with the surrounding country is insane. We were standing on the bank, wishing we could swim. We were keen to get some relief from the relentless heat and bone dry landscape. The country is in the grip of drought, yet we were witnessing a flood!

With no hope of swimming or kayaking and an absolute hammering from ravenous mosquitos, we moved on the next morning. Driving East towards Thargomindah and ultimately Quilpie, we crossed Cooper Creek another two times.

Driving out of Cullyamurra Waterhole, we only had to drive a few hundred metres away from the river and we were back into that harsh Corner Country landscape. The heat was building and reflecting off vast plains of stones.

Crossing into Queensland, we were surprised to find the road was tarred. After about 15km we descended towards the bridge over Cooper Creek, North-East of the Dig Tree. Again, the landscape is just stones as far as the eye can see… with a flooded Cooper Creek slicing through the middle.

The Cooper was fairly cranking along here and we wondered if the secondary flow had come through.

As we pushed East, channels began to appear and some had recently flooded. The road crossed Cooper Creek again West of Nockatunga, a 15km wide floodplain with a myriad of small channels. Most of these had running water, a bizarre sight in such a desolate place.

We now understood exactly why this region is referred to as Channel Country.

The significance of what we witnessed took a few days to sink in.

This water had fallen from the sky many of hundreds of kilometres North and taken the best part of a month to flow to Innamincka. On the way it filled every waterhole, dam, depression and creek bed… trickling this way and that through a parched landscape.

Walk a single footstep away from the water’s edge and the land is in the grip of a drought. The sun still beats down relentlessly, yet the water keeps flowing.

Will it get to Lake Eyre? No one can say for certain. Perhaps it will. Or maybe the ground will claim this flood on the way, sucking it into the desperately dry ground.

There’s no doubt, we live in a truly extraordinary country. Despite man’s attempts to tame Mother Nature, she just keeps doing what she’s done for millions of years.

What we saw will stay with us forever. A miracle of nature on a grand scale.