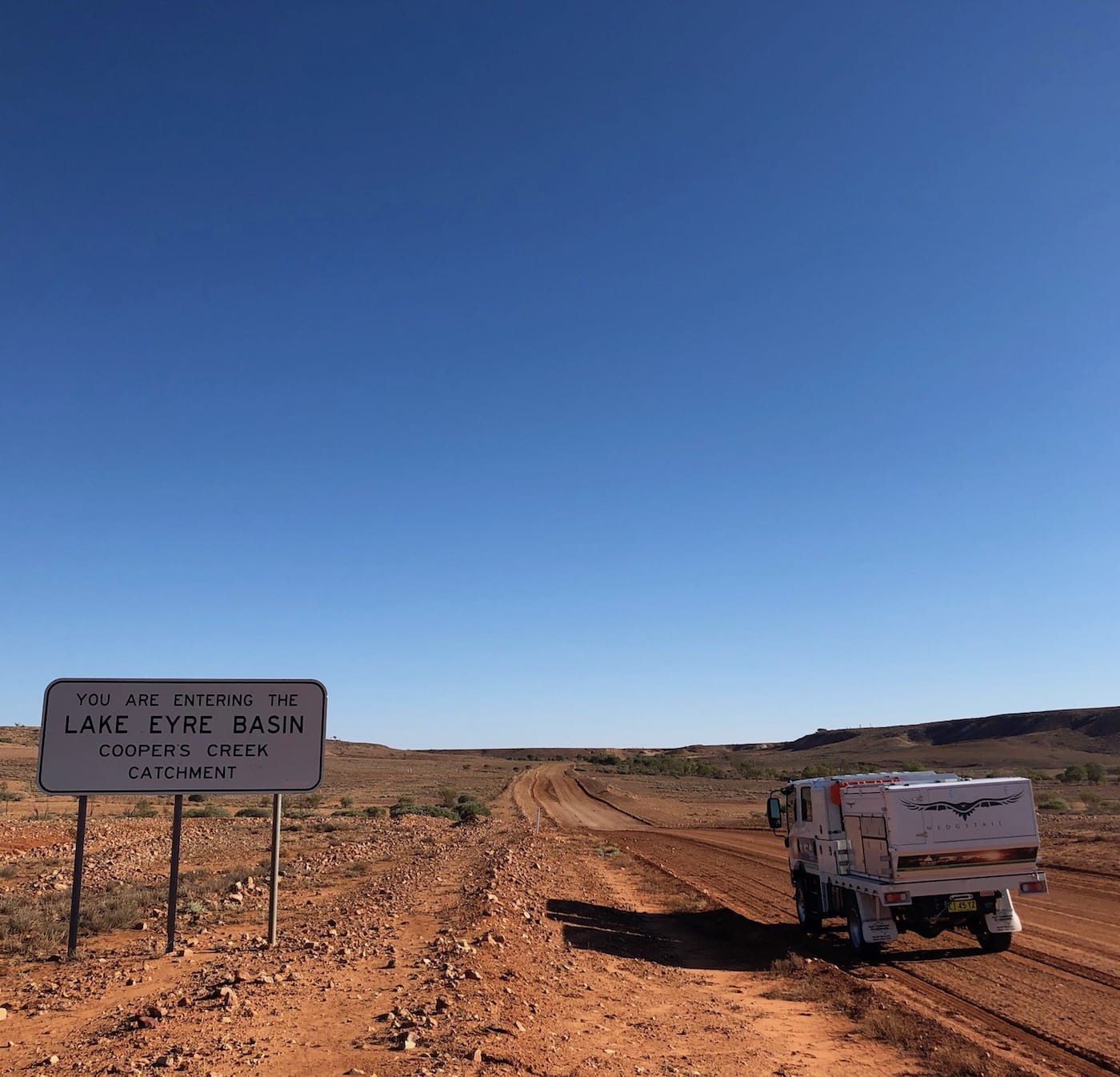 Plus, A Selection Of Alternate Routes

You have quite a few options when travelling from Tibooburra to Innamincka. We chose the “three states in one day” option, a loop up and into Queensland then across to Innamincka. So what’s the road like? Well, I hope you like corrugations!

We’ve also done some of the alternative routes. Each one is a brilliant drive. It really doesn’t matter which way you go, they’re all good!

As an aside, we were travelling to Innamincka to see Cooper Creek in flood. If you ever get a chance to do this, jump at the opportunity. It’s simply amazing to see.

But first, let’s have a look at some of the ways you can travel from Tibooburra to Innamincka.

Which Way Can You Go?

Here’s a few ways you can travel between Tibooburra and Innamincka.

The first is to head West from Tibooburra to Cameron Corner, then across to the Strezlecki Track, turn right, follow for ages, chuck a left and you’re there.

Or you can go West from Tibooburra towards Cameron Corner, don’t turn off to Cameron Corner, but continue to the NSW/QLD border. Follow this road through the sand dunes until it hits Moomba Road, turn left, follow until the turnoff to Innamincka on your right.

Go here for more information and maps on these routes and more.

We chose to drive North from Tibooburra through Warri Gate on the NSW/QLD border, follow for a while, turn left onto Orientos Road, left onto Moomba Road and follow until you turn right to Innamincka.

This is a remote road and cuts through some serious sand dune country. You’re unlikely to see another vehicle out here. So be careful and be prepared in case you break down.

Leaving Tibooburra, the road is tar for a short distance. Then it becomes a wide, well maintained dirt road all the way to Warri Gate. So it sort of lives up to its name, Silver City “Highway”.

Once you cross the border, those Queenslanders have done a few things. Firstly they’ve laid down white gravel. Secondly the road becomes Warri Gate Road. After all it wouldn’t be right to call it Silver City Highway, that’s a name those New South Welshmen use!

And thirdly, they’ve erected a giant sign warning that the speed limit is 50km/h in built-up areas. I’m thinking this might be bureaucracy gone mad…

Turn left off Warri Gate Road onto Orientos Road and you’re into sand dune country. The road varies from fantastic sandy road to a few deep sand sections to some pretty bad sections of corrugations. Just take it easy and you’ll be fine.

Then you turn left onto Moomba Road. And this is where things get interesting.

Good sections are few and far between. The first stretch is narrow, ducking and weaving up and around sand dunes. Someone in their wisdom decided to cap the sand dune crests with clay. These have all broken up. So on top of nearly every dune is a mix of rock-hard clay and deep bull dust holes.

In between these crests the road twists and weaves, so you have no chance of getting up some speed to get on top of the endless corrugations. It’s a long journey along this road. Moomba Road finally hits a T intersection where Moomba Road continues to the left.

But don’t expect much relief.

This is a wide, well used gravel road. It’s the main link from the Strezlecki Track into the Cooper/Eromanga Basin oil and gas fields. You cross the QLD/SA border along here, although you wouldn’t know it. There’s no signage at all, quite strange really.

Some serious money has been spent on this road, with major earthworks to build up the road between sand dunes and cuttings into the sand dunes. And the road is at least four lanes wide in places. Clearly this is a major truck route.

And beware. Some of the bull dust holes at the top of the sand dune crests are big enough to swallow a small car.

Let’s just say we were glad to reach the Innamincka turnoff.

Mind you, you need your wits about you on this road too. There are a few corrugations. But the watch-out here is the washouts. You’re on them before you realise and some of them are pretty deep.

Having warned you about the poor state of the roads, it does depend entirely on when the grader’s been through. We travelled parts of this route again and some of it was in great condition. Just be prepared…

Other Routes From Tibooburra To Innamincka

It doesn’t really matter which road you take between these towns, each one is special in its own way. So what are your choices? Let’s have a look.

We’ve compiled these as if you’re driving from Tibooburra to Innamincka. But you can use these as a guide, no matter which direction you choose.

Be aware, some of these drives can be remote. Be prepared for breakdowns and make sure you carry enough water and food in case the worst happens.

Middle Road is an alternative route to the Tibooburra – Cameron Corner Road. Head north out of Tibooburra towards Warri Gate. After 19km, turn onto the Jump Up Loop Road.

This drive is just under 40km and takes you into country you’d never imagine existed out here. The Loop Road crosses gibber plains then meanders along a series of watercourses for ages. It leads you into jump-up country and pretty soon you’re heading straight for the hills.

An abrupt climb spits you out on top of the jump-up. Spend a bit of time at the lookout. You gaze down into the valley you just drove through and it’s laid out before you like a map. From up here, you’ll see how the water flows vaguely south towards Tibooburra.

The hills themselves are full of colour, similar to [the Painted Desert in South Australia]… just on a smaller scale. One day we’ll have to camp within sight of these hills and watch the sunrise. I imagine it would be spectacular.

There is in fact a National Parks campground just north of the lookout.

Keep following the Jump Up Loop Road north until you reach Middle Road at Olive Downs. This property is now part of Sturt National Park. It must have been a hot and isolated place to live when it was a working station.

Turn left onto Middle Road and follow until you see the sign to Toona Gate. Get your passport ready… you’re about to enter Queensland!

This track takes you through sand dune country. These low dunes aren’t any anything to worry about though. The road is well-formed all the way to and beyond Omicron Station. Depending on the season, you might see some water in the ephemeral lakes along the way.

They’d had a heavy fall of rain a few weeks before we drove through and water was lying around everywhere. The road was washed out in places too. So be careful, you never know what’s around the next bend!

The Omicron Road joins onto Orientos Road, past Epsilon Station and into oil and gas fields. We covered this part of the journey earlier, so I won’t repeat myself here.

A variation on the above route is to drive past Toona Gate and follow Middle Road to the intersection of the Tibooburra – Cameron Corner Road. Turn right then go through Fortville Gate.

A variation on the Fortville Gate route is to drive out to Cameron Corner then hook right and head vaguely North-East for a while until you turn left onto Omicron Road.

And this way, you get to see the corner of the three states at Cameron Corner!

If you take the main Tibooburra – Cameron Corner Road past Waka and Fort Grey, be aware it varies from good to downright horrible! This time, we struck it at its worst after a long dry spell.

This one is fun! West of Cameron Corner, you drive over hundreds of sand dunes. The road is arrow straight and you feel like you’re on a giant rollercoaster. And don’t worry, the road is hard-packed. It’s not a slog through deep sand.

Just be careful. There have been some bad collisions along here, with over-enthusiastic travellers forgetting about on-coming traffic at the crests of the dunes. And some crests can have nasty bulldust holes over them which you can’t see until you’re in them.

Keep an eye out for the oil donkeys dotted along the Old Strzelecki Track. They’re pretty hard to miss!

And last but not least, if you continue past the Old Strzelecki Track turnoff you’ll reach the Strzelecki Track. This takes you past Moomba, a strange sight in the desert.

This is a roadtrain route. So as always, give the trucks plenty of room and be prepared to stop until the dust clears. Generally this road is in pretty good condition, although it can deteriorate quickly.

The Tibooburra to Innamincka road via Orientos Road is an adventure. It’s definitely remote. We saw a crew laying a gas pipe across the road and one road train out of Innamincka. And that was it.

And the alternative routes are just as good. You’ll be amazed how much the country changes between Tibooburra and Innamincka… from vast gibber plains to tall sand dunes and even vast shallow lakes after decent rain. The Corner Country is a special place.

Be careful, be prepared for breakdowns. Take these roads slowly, don’t be in a hurry. If you are, either don’t go this way or expect suspension damage. Some parts are smooth, but they’re few and far between.

Above all, enjoy the remoteness. You’re driving through remote sand dune country and the landscape is simply beautiful. Although if you’re the driver, you won’t have much of a chance to sightsee!

2 thoughts on “What’s The Road Like From Tibooburra To Innamincka?”