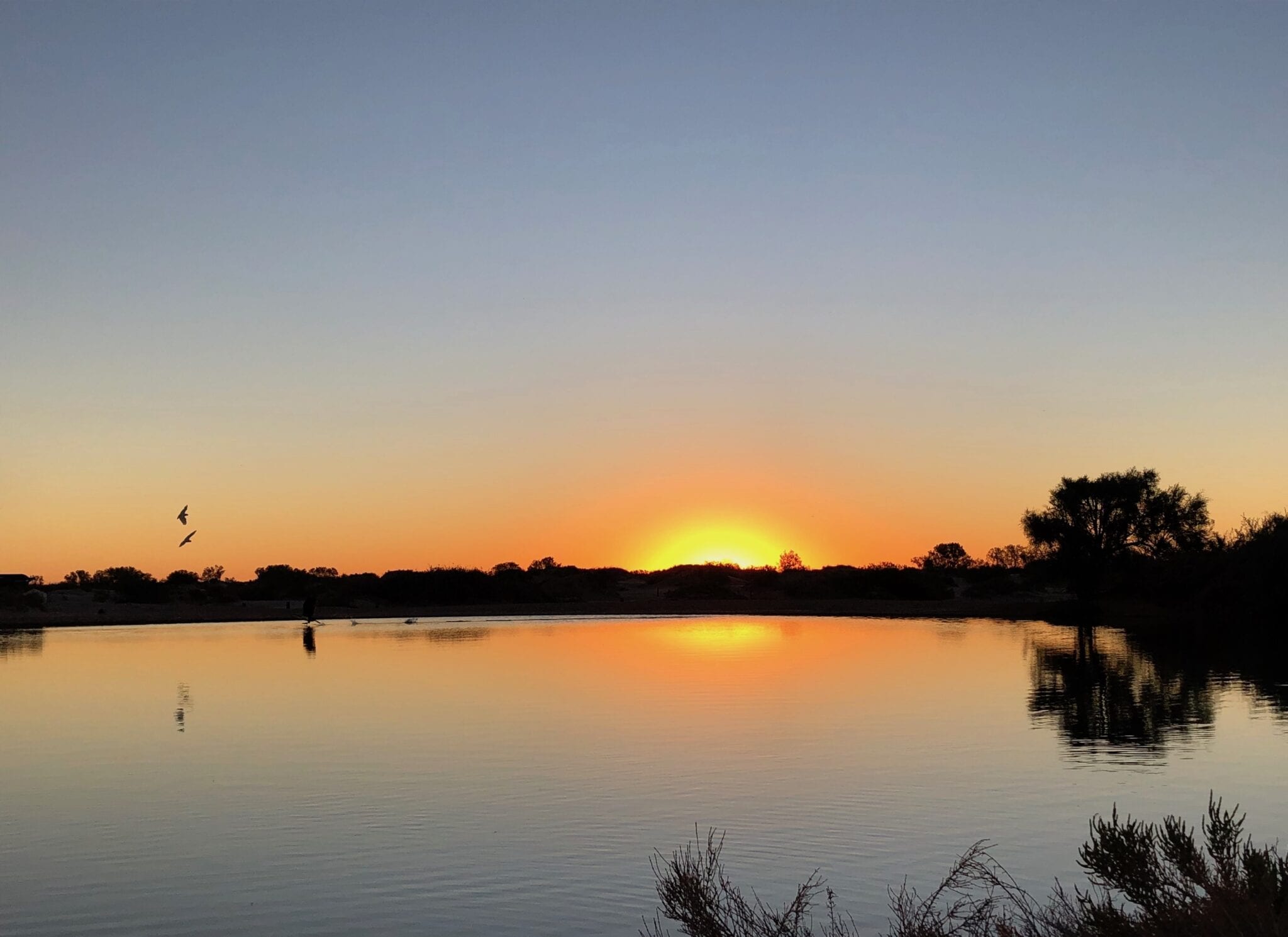 If you want to experience the isolation of the desert with your own swimming pool, then Montecollina Bore is the place for you. Let me explain.

Montecollina Bore is on the Strzelecki Track, about 220 km north-east of Lyndhurst in South Australia. The track broadly follows the route of Harry Redford and two of his mates, who stole 1,000 odd cattle from south-west Queensland in 1870. He backed himself to be able to get this mob to market in Adelaide, across some forbidding country.

At the time, there was no track to follow and little known about this desert country. It was basically the same route Burke and Wills unsuccessfully tried to follow from Cooper Creek down to Mount Hopeless station, just nine years earlier.

Harry and his mates succeeded. In the process, they opened a route from the northern Flinders Ranges into the south-west corner of Queensland. When Harry was finally caught and faced the judge, the jury let him off despite damning evidence.

It seems the jury admired his courage and incredible bush skills to achieve what he did.

In time, others followed Harry’s route and in 1903 Montecollina Bore was sunk to provide a reliable water source for travellers and stock.

Now, Montecollina Bore is a stopover for travellers… a welcome break from the dust and corrugations of the Strzelecki Track. Harry could never have imagined the daily procession of roadtrains that now use this track to access the Moomba gas fields plus many other oil and gas fields beyond Moomba.

And to clear up a popular misconception, Montecollina Bore is not within a Regional Reserve… despite what your map might tell you. It’s on Lindon Station, a working cattle station.

You can access the bore from Innamincka, Tibooburra via Cameron Corner, Lyndhurst or from the eastern side of the Flinders Ranges.

We travelled up the east Flinders from Yunta on the Barrier Highway and camped overnight at Weetootla Gorge just south of Arkaroola. Being early in the tourist season (April) we saw no other travellers and hardly another vehicle on the road, until we hit the Strzelecki.

This is an interesting journey, with a wide range of country from semi-arid to desert. As always, the Flinders Range are simply amazing. The scenery of the Flinders is spectacular, such a contrast from the surrounding plains.

Whichever way you decide to go, be aware this is remote country. Check and double check the distances between fuel stops. For example when you leave Arkaroola, the next fuel stop is 430 km away at Innamincka.

Take plenty of drinking water and food in case you break down or get stranded.

And be careful on the Strzelecki. This road varies between good and horrible. Remember it’s a main artery for road trains, so road conditions vary widely.

Keep your speed down and give the road trains plenty of room, as they sometimes need to use the whole road to avoid washouts, bull dust or particularly rough patches. Pull over and give them space.

Montecollina Bore is basic bush (or desert) camping. You won’t even find a drop toilet here. There are a couple of covered areas, but the shifting sand has all but buried the wooden seats. You need to bring everything, including drinking water.

This is weird white sand/clay country. You’re surrounded by thousands of strange sand hillocks about two metres high. They’re like a million pimples on a white face with their heads of saltbush holding each hillock together, while the surrounding sand has been blown away.

You can easily tuck in behind one of these hillocks to get shelter from the wind.

And bring a pair of sunnies. The glare hits you from all sides, giving you a permanent squint. And if the ceaseless glare doesn’t bother you, the flies probably will. They crawl in your eyes, up your nose and pretty well anywhere they can find.

The standout attraction though is the bore pool. This continually trickles warm artesian water into a clean pool. This pool overflows into a series of surrounding pools, providing a rare sight in the white desert sand… water!

A mob of corellas have claimed the wetlands as their own and they get most upset when you go near their water. Like all corellas though, they eventually settle down again after making an endless racket and endlessly flying back and forth between the small trees surrounding the bore.

We watched a pied cormorant fishing for yabbies. It would dive and disappear for a while before reappearing with a yabbie in its beak. This performance continued until the cormorant clearly couldn’t eat another thing.

It then stood on the side of the water looking very contented!

The water coming out of the bore is full of minerals and quite hot, probably around 35 degrees C. You can pretend you’re on your own private desert island, even though the ocean is a long way from here!

We visited in early April and the water in the pool was quite cool. In fact we were surprised how cold it was. We didn’t mind though. After a hot dusty day this refreshing swim was most welcome.

Between Dark And Daylight

The sky here seems huge, interrupted only by those hillocks. Sunrises and sunsets are fantastic and the night sky folds over you like a giant shimmering rug. This is the place to lie back in your chair and stare into the endless night sky.

Montecollina Bore has to be on your list for an overnight stop if you’re travelling the Strzelecki Track, if only to have a refreshing swim.