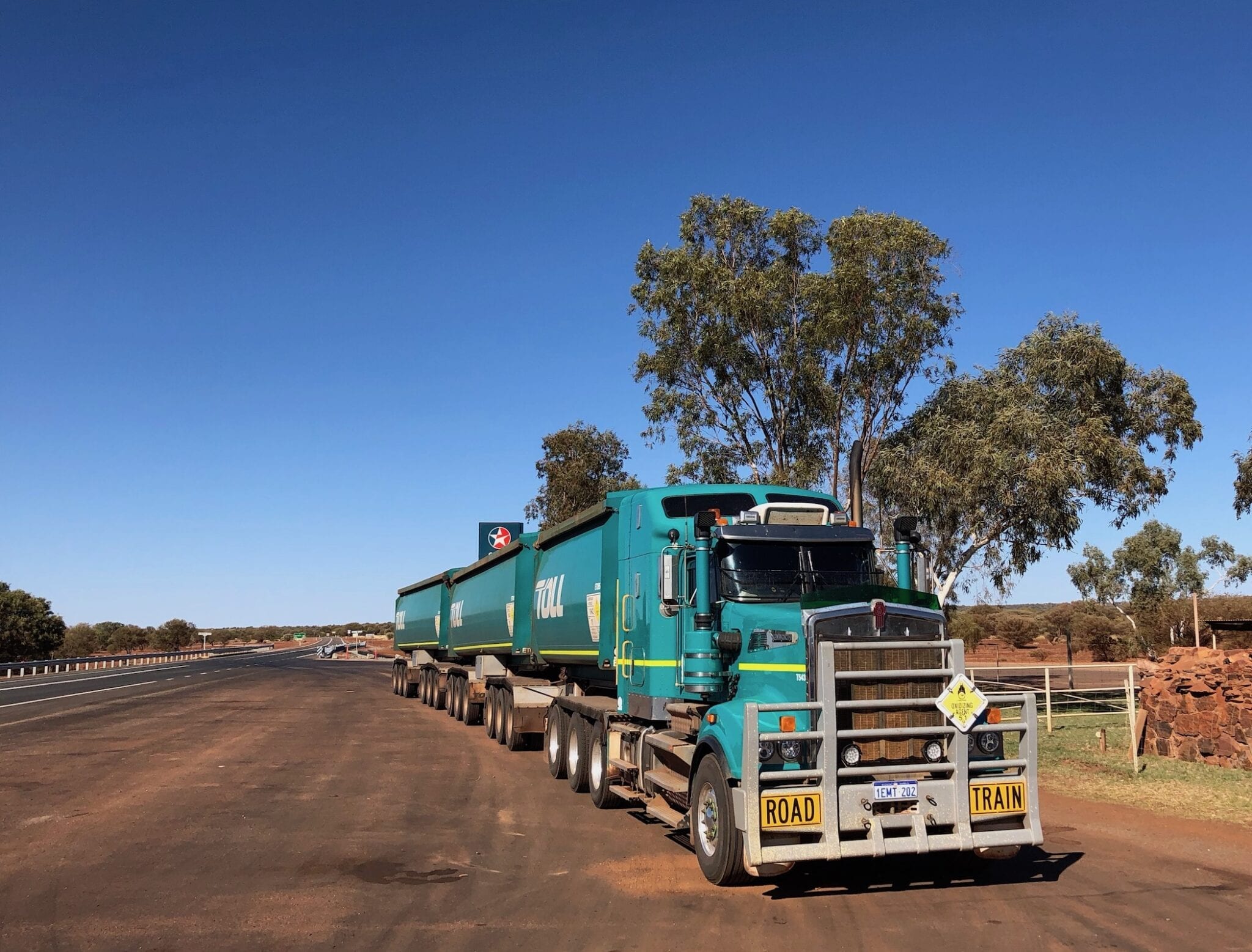 Trucks are everywhere. Love them or hate them, we need trucks. We rely on them for pretty well everything we consume… from fuel to our favourite chocolate biscuits on the supermarket shelf.

And the further you travel from cities, the bigger they are.

Whether a small truck or a 60 metre long road train, we need to treat trucks with respect. It’s simple physics… and basic road safety.

If something big hits something small, the smaller of the two always comes off second best.

(And yes, there is such a thing as a 60m long road train. They’re running in the Pilbara under special permit, weighing just on 200 tonnes fully loaded.)

You can listen to the “experts” ranting about trucks… or you can be pragmatic. Face it, trucks are here to stay.

In every truck there’s a driver… a person. It’s easy to forget this when a truck looms in your mirror.

Truck drivers are people, just like you and me. They might be having a great day. Or they might be going through a marriage breakup, or their child is sick or in trouble with the law.

And just like you and me, occasionally they’ll make mistakes or make a bad decision. They’re only human.

Overwhelmingly though, truck drivers are experienced professionals. Personally I would much rather share the road with trucks than cars. Why? Because they’re predictable, professional and if you do the right thing, courteous.

Yes, a tiny percentage are maniacs. But have a look at the cars around you.

Here’s a few things to consider before we get into details:

Many years ago, one of the states had a road safety slogan, “The Road Is There To Share”. This is so true.

You don’t own the road, nor do the truck drivers. The road is there to share… we’re all on the road for some reason, and we have to share it. So we might as well be courteous and considerate.

1. Give Them Room To Pass

Trucks are big, that much is obvious. If you’re on a narrow road, move over to the left of your lane and give them some space. Don’t hug the centreline.

This is no time to assert your authority or play games. The truck is bigger, you’re smaller, so move over. Simple.

And if you’re on one of those horrible single lane tar roads mostly found in Western Queensland, get off the tar entirely and let them stay on the tar.

Why? Well, the simple unofficial rule on these roads is that the bigger vehicle gets right of way.

Plus you probably don’t want a truck dropping wheels onto the gravel and spraying fist-sized rocks in your direction. Or worse, the rear wheels of the back trailer dropping off the tar and causing the whole combination to snake wildly.

If you have to pull over and stop, so be it.

2. Give Them Room To Overtake

Honestly, it’s rare to find a caravan doing the 100km/h speed limit. Most travel between 80 and 90 km/h. Now this is not a rant on how caravaners should maintain the speed limit. I’ll leave that for another time…

If you must travel slowly on the open road, keep a good eye on what’s happening behind you. If traffic is building, pull over when safe and let them past.

Maintain a consistent speed. More on this later.

And if you come up behind a slow vehicle and decide not to overtake, then back off. Give other vehicles room to overtake you and be able to pull back in front safely.

If you’re that vehicle following a slower vehicle and you don’t want to overtake, that’s fine. Road safety is all about knowing your limitations. Just give others room to overtake you safely.

So if you see a truck coming up behind you, gradually open the gap between you and the vehicle you’re following.

In the photo above, the triple roadtrain driver had zero chance of overtaking. Where was he going to have the space to build up speed and get around two long vehicles? If the second caravaner had opened the gap, then the truck driver would be able to overtake each vehicle safely.

If you have a UHF, then use it.

Either way, don’t back off until the truck has moved out to overtake. If you do, they could easily clip the back of you.

Make sure you back off, as you promised. When it’s safe for them to pull back in, flash your headlights or tell them over the UHF.

And keep a close eye on the road ahead. If an on-coming vehicle suddenly appears from nowhere, you’ll need to wipe off your speed quickly so the truck can pull back in.

Remember, this is not the time to assert your authority. There’s people in all these vehicles, including the truck. They all have families and loved ones. You’re not playing some weird video game. No, you’re messing with peoples’ lives.

No matter what vehicle I drive, there’s one thing that drives me crazy… the one thing that makes me wish rocket launchers were an optional extra on all vehicles. What is this thing?

Drivers speeding up and slowing down… not maintaining a consistent speed. Arrrrgh!

We’ve all been caught behind someone who’s doing 60km/h one minute, then 110 the next and so on. And we all know how frustrating it is when you try to overtake, then they speed up!

It’s bad enough when you’re in a car. Imagine what it’s like in a truck.

Imagine your vehicle weighs 60 tonnes or more and takes ages to get up to speed. You come up behind a vehicle doing 80km/h. There’s a long straight approaching, so you time your run carefully and gradually build speed.

You’re almost at the place where you’re going to overtake. Then the vehicle slows down a bit. You have to back off. Now you’ve lost all momentum and have no chance of overtaking. So you wait.

Another chance appears. This time you start to overtake. But now the car has sped up, it’s sitting beside you. Now you’re stuck on the wrong side of the road.

Be consistent. Maintain a constant speed, no matter what that speed is. This way, trucks who want to overtake can be confident you won’t speed up or slow down when they try to overtake you.

99% of the time when you see a truck tailgating a car, it’s because the car is not maintaining a consistent speed. Remember, truck drivers are human beings. They will most likely be angry and frustrated. Wouldn’t you?

And if you don’t have a UHF to call them up, simply be consistent. This gives truck drivers some confidence they’ll be able to pass you safely.

When an oversize load is coming your way, be extra vigilant. Some are simply loads slightly longer or wider than the trailer. Others are massive, 8 metres wide or more.

If you have a UHF, listen out for oversize loads. The escort in front will call up all approaching trucks and warn them.

If you don’t have a UHF, slow down when you see an oversize load escort. If the load takes up the entire road, they’ll likely drive down the centre of the road to indicate you have to pull off the road.

Slow down and assess the situation. Be prepared to pull right off the road.

Road safety is about people. Concentrate on every person inside every vehicle you encounter. Every one of those people has someone who loves and cares for them.

And… for more Reviews and Articles, go here.