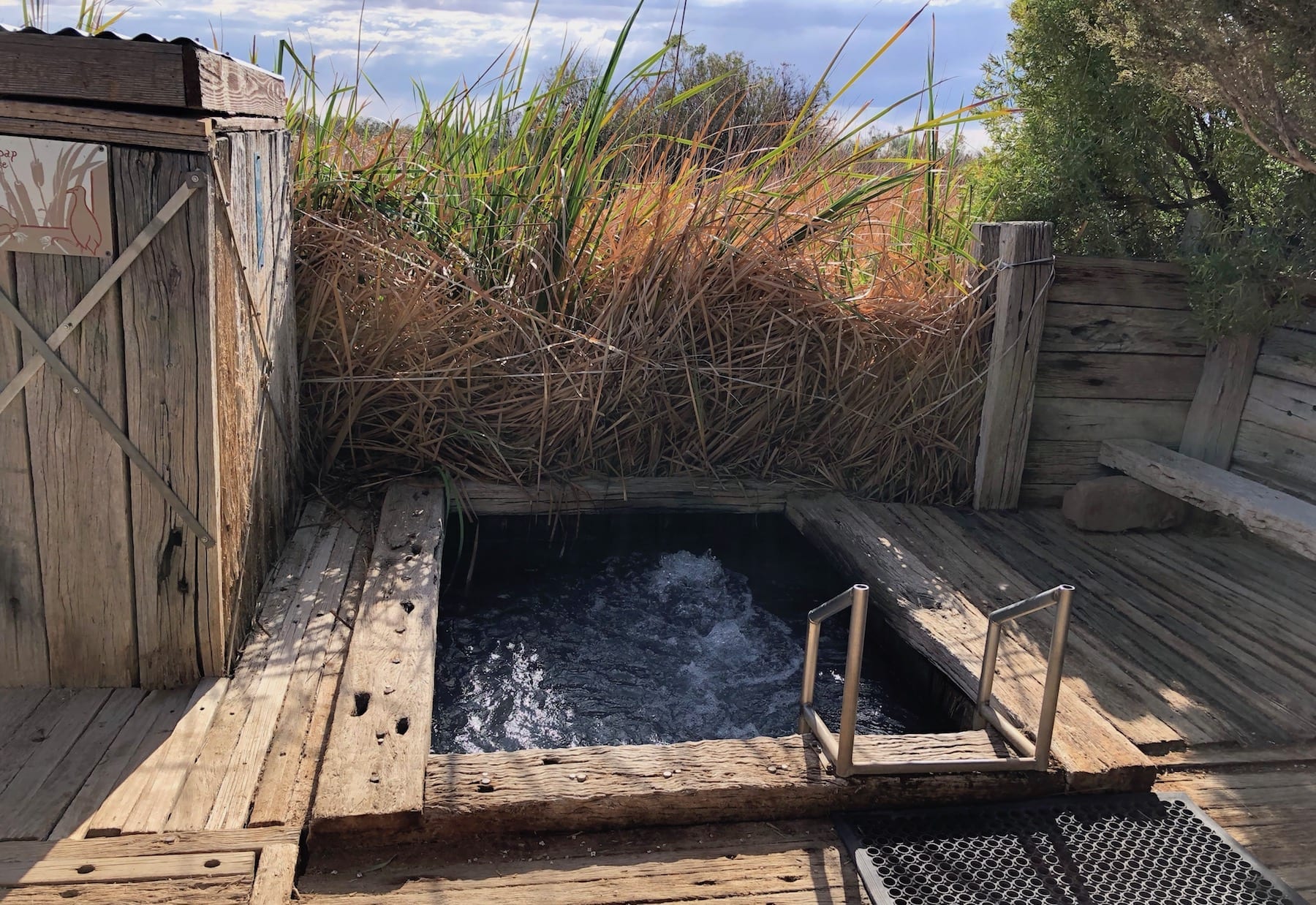 Coward Springs was “rescued” by an ambitious couple in 1991. Prue Collis and Greg Emmett purchased the square mile of government-owned land and set to work.

They restored buildings, planted native trees, preserved the wetland generated by the artesian spring and established a campground. Coward Springs Campground is now a popular camping spot for travellers on the Oodnadatta Track in South Australia.

The South Australian Government sold parcels of land along the Old Ghan route in the early 1990s. The line had closed, so the government had no further use for the land on which stations and sidings had been built. Most were bought by surrounding landholders and became grazing country.

Prue and Greg had other ideas. By preserving the square mile, just a tiny piece of this country is now back to some semblance of what it once was.

Coward Springs was once a mound spring, much like Blanche Cup and The Bubbler just down the track. When white explorers discovered the springs in 1858, settlers rushed to the area to stake their claims over vast grazing areas.

We have to assume the original spring was either inadvertently destroyed by the white settlers and their stock, or the outflows were insufficient. Original estimates were of flows over 20,000 litres per day. A bore was sunk in 1886, yielding a massive 4,500,000 litres per day. Thankfully it was capped a few years later.

However, the mineral-rich artesian water took its toll and ate away the bore’s casing. It was spewing out uncontrolled flows for many years. The bore was rehabilitated in 1993 and capped to control the flow.

The natural spa you can now luxuriate in, flows out to wetlands that provide life for many birds and plant species.

With occupation came infrastructure. The Overland Telegraph Line utilised the chain of mound springs and Afghan camel teams supplied the pastoral leases strung along what was once an Aboriginal trade route.

Then came the Transcontinental Railway, or Old Ghan as we know it. Coward Springs was a vital hub during its construction to Oodnadatta, even boasting a hospital at one stage.

Once complete, pastoralists used Coward Springs siding as a vital transport link to the South. A pub sprang up in the mid-1880s and continued to operate well into the mid-twentieth century.

The hotel and store shown above, once sat where the campground is now. The palm tree is still there and according to Prue Collis, one of the gate posts is in amongst the existing campground.

At the back corner of the hotel, you can just make out a windmill. Prue believes this was used to pump out the basement, which continually filled with sub-soil water. And if you look really closely you’ll see the original Oodnadatta Track passing in front of the hotel.

The museum covers the history of Coward Springs and the Oodnadatta Track. Not just white history either.

Prue and Greg have recognised the Arabunna people have cared for this country for thousands of years. They’ve done a great job of documenting both black and white history in the museum.

Spend a while in the museum. Take time to read the stories and learn more about the extraordinary Great Artesian Basin. It’s the perfect way to get a feel for this arid yet beautiful country.

Next time you’re planning an Oodnadatta Track adventure, stay a couple of nights at Coward Springs. Prue and Greg have established a unique square mile of land in this arid country, one they can be proud of.

A natural spa in the desert… it doesn’t get much better than that!

Coward Springs is on Arabunna Country.

Thanks to Prue Collis for taking the time to provide us with some history of Coward Springs.