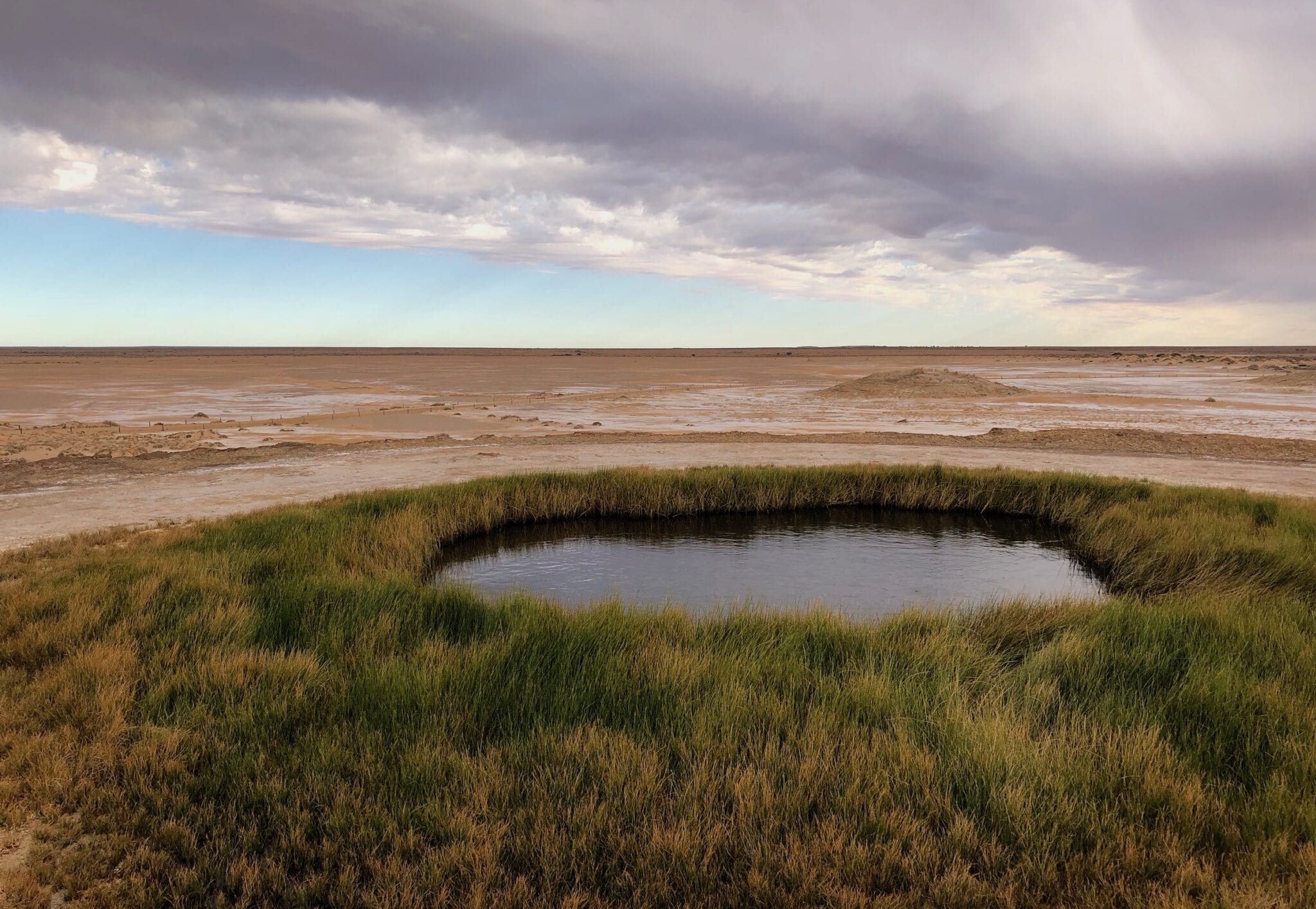 Rain falls along the Great Dividing Range in Queensland. Some of it seeps deep underground through cracks and fault lines, into the Great Artesian Basin. This artesian water creeps ever-westward at just a metre or so per year.

The western fringes of land above the Great Artesian Basin (GAB) are at lower altitudes than the eastern side in Queensland. Once an inland sea, some places  along the western side like Kati Thanda (Lake Eyre) are actually below sea level.

Because the fill “point” is much higher than the discharge point (think a bucket of water with a small hole in the bottom), the GAB is pressurised. In simple terms, the western side is more likely to “leak” since the water is closer to the surface. Artesian water is forced up through cracks and faults in the rock, forming mounds springs along the western fringes of the GAB.

The Mounds Springs of South Australia are the GAB’s pressure relief valves.

Two million years after seeping into the GAB in eastern Queensland, the artesian water sees the light of day in places like Wabma Kadarbu, Coward Springs and Dalhousie Springs.

Blanche Cup Springs and The Bubbler are just two examples of thousands of mound springs in South Australia.

Wabma Kadarbu (pronounced “Wab-ma Cuddi-Ar-Boo”) Mound Springs Conservation Reserve is perhaps better known as Blanche Cup Springs and/or The Bubbler. The reserve is about 135km WNW of Marree, just off the Oodnadatta Track. Coward Springs is just up the road, less than 10km to the NW.

The reserve itself takes in quite a large area of land. Blanche Cup Springs and The Bubbler are just a small part of the reserve.

We visited in August on a grey and cloudy winter day. We were following the Old Ghan rail line all the way from Quorn to Alice Springs.

Driving in, we were greeted with large areas of salt-covered land and lots of strange little hills. With black clouds overhead and a cold wind blowing, this place wasn’t exactly inviting. A clearly defined road with barriers on both sides prevents rednecks from tearing up the fragile landscape.

The small hills are old mound springs which have dried up over time. In turn, the salt-covered land indicates where water once lay.

A timber walkway leads you up to the Blanche Cup Mound Spring. At the top, the round spring is surrounded by a thriving perimeter of green grass. The grass provides a striking contrast to the desolate country pressing in on all sides.

Jump back into the car and take a short drive to The Bubbler. This once spat gas bubbles up to half a metre high, gurgling and bubbling away like the earth had a bad stomach ache.

Unfortunately the Great Artesian Basin has been de-pressurised over the years, a direct result of thousands of bores having been sunk all through the GAB. We saw a few small bubbles, but nothing to get excited about.

The artesian water flows down the mound spring onto the immediate surrounding area. All sorts of plants and birds thrive in this tiny pocket of wetland.

Aboriginal people had used the natural mound springs as a trade route through the arid lands. Early explorers like John McDouall Stuart used these springs to leap-frog their way north. Then the Overland Telegraph Line followed, the Old Ghan and of course the settlers.

Once white man arrived, the springs were seen as a resource to be exploited. They were trampled and soils compacted by livestock, explorers and settlers alike. Some were destroyed, damaged beyond repair.

Unfortunately The Bubbler is no longer roaring and spitting beast. Irreversible damage has been done to the Great Artesian Basin.

The demands of water for livestock, habitation and mining all across the GAB are immense. And with successive Queensland governments falling over themselves to mine every last bit of coal and grant licences to frack coal seam gas over and through the GAB, we couldn’t help but wonder how much longer water will continue to flow from these mound springs.

The Great Artesian Basin isn’t an infinite resource… despite the drivel pouring from politicians’ mouths to the contrary.

Wabma Kadarbu Mound Springs Conservation Park is fascinating. When you stand there and watch the water flowing from the ground then realise it has spent two million years creeping westward underground, you appreciate just how insignificant you are.

To Mother Nature, we humans are just blips on her timeline.

TourRadar have a Central Australian discovery tour which runs through some of the country mentioned in this article.