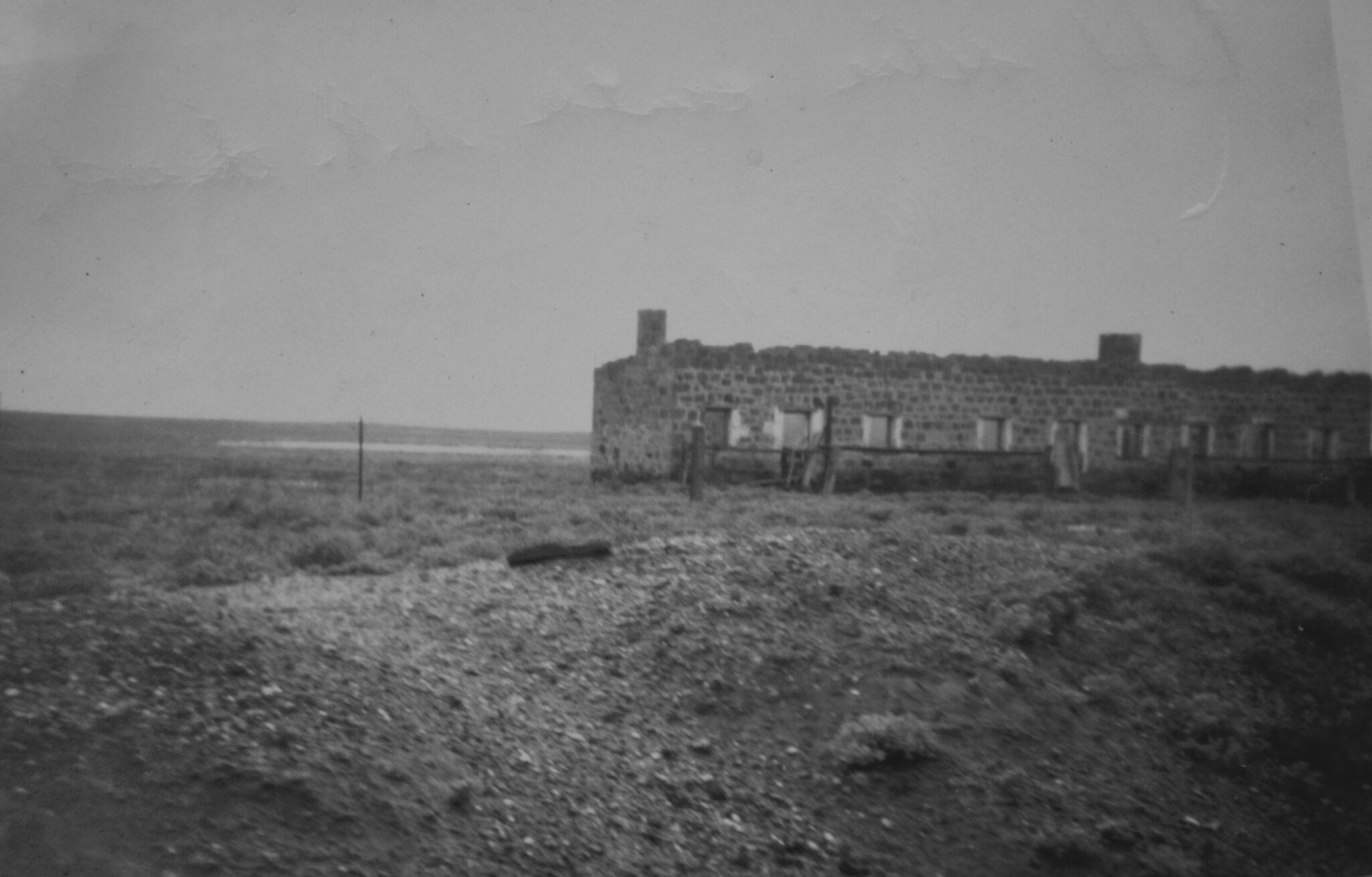 Last time, my father Graham and his travelling companions finally boarded the Old Ghan and headed north towards Alice Springs.

We join them as they pull out of Marree, about to enter a forbidding landscape of salt lakes and clay.

As the reluctant passengers settle back into their not-so comfortable surroundings, the Old Ghan heads her nose west out of Marree. She’s following the Overland Telegraph Line, first west then north-west.

Vast stretches of flat ground lie either side of the line with vague hills and slopes all but bare and desolate. The soil changes to a whitish clay. Wind whips up clouds of dust, smashing diagonally into the train and filling them with white powder. Passengers cough and sneeze, shaking the dust off their clothes.

And the stones! Stones are everywhere, small, large and everything in between. The country switches from light coloured clay to huge swathes of plains country, covered in millions of black stones.

Strange flat-topped hills in the distance stand out against the plains. And thin lines of vegetation reveal where the water flows in those rare times when rain falls in this forbidding landscape.

The passengers soon learn that the sliver of vegetation appearing in the distance means they’ll soon be crossing another of those confounded bridges, bumping and lurching as the train slows to approach the next bridge with caution. For this land was never suitable for the weight of a modern-day train. The track settles and the bridge piers shift, and the fettlers on the line do their best to fight the inevitable. The result is an uncomfortable and sometimes scary ride inside their timber and iron box on wheels.

Off to their right, Trev catches a glimpse of what looks like a lake. He nudges Graham awake, dozing after a big breakfast and lack of sleep. Graham snaps off a photo on his Box Brownie and they realise it’s Lake Eyre. And they’re looking at a mirage. It’s salt, not water!

The train passes abandoned fettlers’ huts, built from local stone. The roofs are missing, having being pilfered for corrugated iron and what precious timber the termites haven’t devoured.

It’s hard to believe people could have lived in these places, stuck for months living on what must have felt like the surface of the moon.

Then off to the left in the distance, one of the party sees a strange sight. They look like small hills, with what appears to be green grass and salt flats surrounding them.

An old-timer on the train solves the mystery. They are the mound springs, where the underground water bubbles to the surface. They’re looking at The Bubbler and Blanche Cup Springs. He explains this is why the Overland Telegraph Line and The Ghan run through here. They are following a trail of mound springs between Marree and Oodnadatta.

An afternoon stop at Coward Springs, another loco and crew changeover. Just enough time to stretch their legs and take a photo of the large hotel with a palm tree out the front, of all things! And of course, duck into the hotel for a feed and a couple of quick beers.

North of Coward Springs, Graham and Trev sight their first red sand dune just on dark. It’s the first of thousands they’ll see as they head towards Alice. This is more like it, this is what they thought the desert looked like!

But the sand dunes don’t have it all to themselves. They surrender to the white clay country again, re-appearing intermittently to break the dominance of the white clay.

Of course, this is just a faint blur in the moonlight to the passengers on the Ghan… an alien landscape glimpsed out the window as they settle in for another cold night’s sleep. The dust and coal soot forms a mist in the dull carriage lighting, with the occasional sneeze breaking up the ever-present rattles and clanks.

Mercifully for those who had come to dread bridge crossings, the Algebuckina Bridge passed relatively unnoticed, apart from the distinctive metallic echo as the train crept across. For this was the longest bridge on the line, at nearly 1,930 feet (590 metres). And it was rather high. At least this bridge had sides, so you didn’t quite have the same feeling that the train was about to fall off!

Another dawn, another town. This time Oodnadatta. Another loco and crew changeover. And another chance to grab a quick feed.

Graham took a photo out the window as they were idling into Oodnadatta. An old truck with a trailer, proudly emblazoned with “United Aborigines Mission S.A. Inc”. Little did he know this institution was to achieve notoriety nearly five decades later for its role in the Stolen Generation.

Back on the train and into sand dune country for real now. The country turned to sand and took on a distinctive red hue. Up, over and around the dunes of Pedirka Desert. Each dune did its best to halt their progress, but the powerful engine was up to the task.

Dust turned to sand as the ever-present wind poured sand into every crevice of both man and machine.

Just when everyone had eaten more than their fair share of sand and coal soot, the country changed again. This time they were in harsh country, once again covered in rocks. They followed a watercourse for quite while, ducking around hills and over wide creekbeds.

And somewhere in amongst all this, they had crossed into the Northern Territory.

Unknown to them they were passing Dalhousie Springs away to their right, yet another natural spring stretching all the way from Marree. These springs had formed a trade route for Aboriginal people for thousands of years. Now they were a lifeline for both the Overland Telegraph and the Ghan.

Approaching Finke, their view was obscured by endless plains of mulga scrub struggling to survive in the forbidding oceans of red sand.

With the last engine and crew changeover at Finke, the passengers had a chance to fill their bellies before a long night through the soft sands, all the way to Alice Springs.

Next time: Taking on the soft sand. Finke to Alice Springs.

From Quorn to Marree, the Old Ghan travels through Nukunu, Banggarla and Kuyani Country.