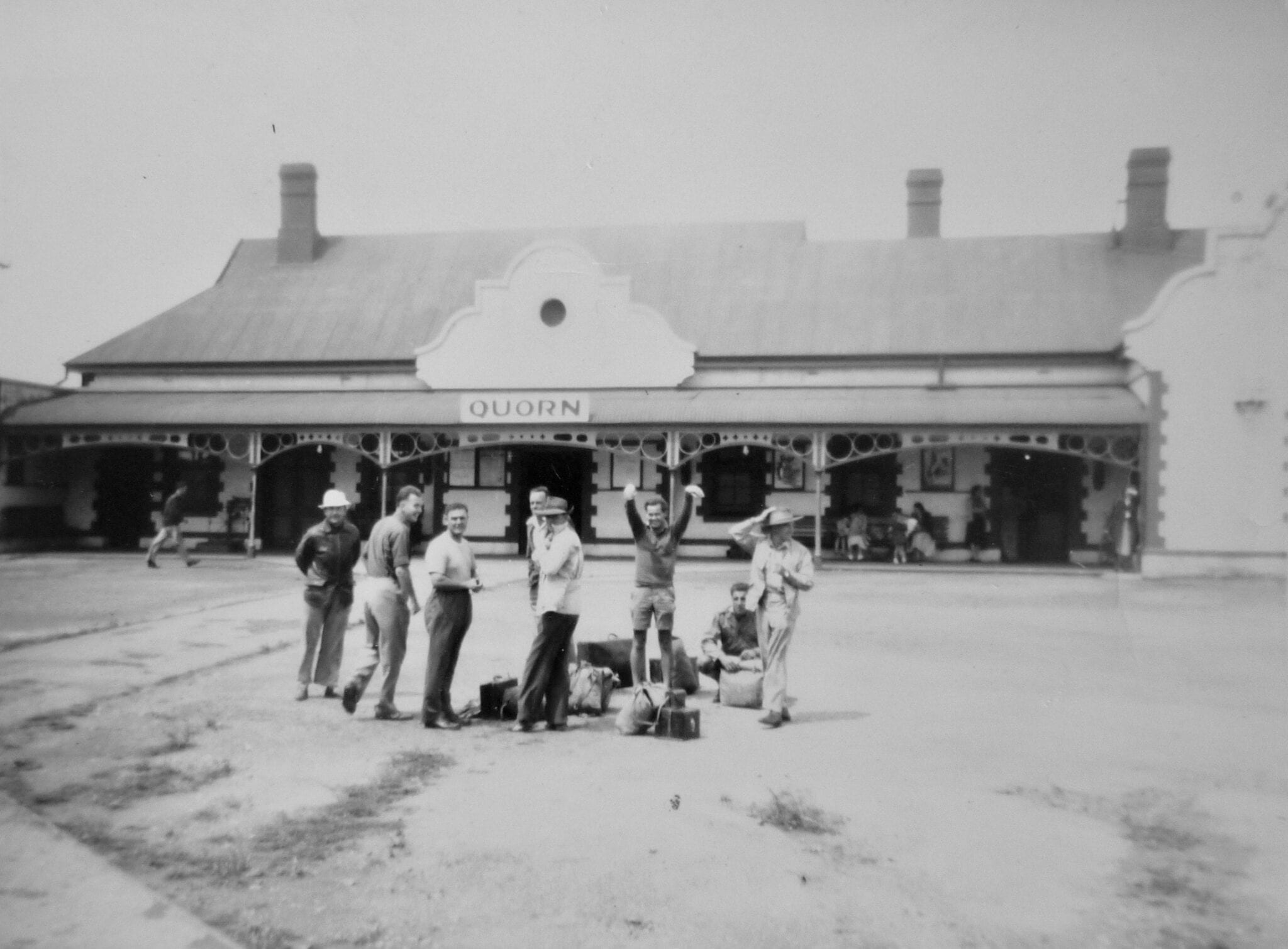 Last time, we discovered how my father Graham found himself standing at Quorn SA railway station in 1950, on a cool autumn afternoon.

This time, the grand adventure north finally gets underway.

Armed with some photos Dad took of Quorn railway station, this was always going to be the starting point of our journey. Dad had taken photos of the surveying party standing in front of the railway station.

In fact it turns out they were at the back of the station. And the exterior hasn’t changed a bit! Even the wooden slatted bench seats are still in the same spot.

It felt strange to be here, imagining Dad leaning against a verandah post rolling a smoke and taking in his unfamiliar surroundings. I could almost see him giving his mate Trev and nudge in the ribs, “Hey Trev, let’s go and have a beer”. A cheeky grin and a nod from Trev and they were off.

Like most rail towns, there was no shortage of pubs nearby.

We watched Dad and Trev wander through the ornate yet functional railway station, hands in pockets and heads slightly bowed as if hoping no one would notice where they were off to. Then sauntering out the front door as their confidence grew, squinting in the sun as they surveyed the street for the most likely watering hole.

Tilting their hats back as they scratched their foreheads, making a decision. Then a slight downward adjustment of their hats and off they went, across the street and into the Criterion Hotel.

We can only assume the surveying party stayed in one of the pubs while they waited for the Old Ghan to show up.

And they could have done a lot worse than being stuck in Quorn for a few days. Even now this place is friendly and laid back, a typical country town. With the railway station dominating the town’s layout, it’s clear this place was built as a rail town.

At last the train arrives and they’re ready to go north. On they hop, all nine of them, full of expectations and just a few nerves.

There’s nothing fancy about the Old Ghan. An angry-looking locomotive whistles and groans, steam belching from everywhere. This loco is like an old bullock, aware of the hard work ahead yet resigned to its fate of dragging a huge load through untamed country.

And the carriages, well. Basic wooden seats and more rattles than a baby daycare centre. The walls creak and groan, the windows rattle endlessly and the roof threatens to join the floor at any moment.

Luxury this most certainly is not. They feel every bump and jolt through the wooden seats as the whole train rocks, bounces and grinds its way forward at a break-neck top speed of 25mph (40km/h).

Leaving Quorn in the afternoon, the view out the window is intriguing. The men gaze at the Flinders Ranges taking shape as they travel north across the valley. The range looks like a giant has picked it up and tipped it on its side, exposing enormous ripples and folds of bedrock.

And the bluebush, it’s everywhere! Miles and miles of plain covered in that grey bluebush.

As they grind towards Hawker, the train does battle with steep grades and clings to the tracks like a mountain goat as it creeps around the side of some seriously steep hills.

Most disconcerting though are the bridges. With the narrow gauge wheels tucked well under the carriages, all you can see is fresh air below you. Then just when you start to get used to this, the train lurches violently to one side as it encounters a warped piece of track on the bridge.

You swear if it happens again, you’ll get off and walk.

Finally, the train pulls into Hawker after dark. The men gratefully jump off, relieved to be on firm ground for a bit. They wait around while the cranky old loco has a drink and deliveries are unloaded in an undignified pile onto the platform.

“All aboard!!” And off they go again. More rickety bridges and winding around hills before the train finally breaks out onto flat ground.

Today as you leave Quorn, the road roughly follows the Old Ghan line. All that remains are the hand built bridges, cuttings and a never-ending embankment where the line used to run. It becomes your companion after a while, like a reassuring old friend keeping you company as you push north.

Sometimes the Old Ghan’s route disappears entirely, only to re-emerge once again. It’s hard to believe this was still operating in the 1980s, such is the complete lack of any sign of the line in some spots. No doubt, much of the rail line and sleepers have been recycled into cattle yards, fence posts and buildings. Waste not, want not.

Into The Flat Country

Let’s jump back onto the train with the men. As the line flattens out, the Flinders Ranges keep them company to the right. The train picks up speed again, maxing out at 25mph.

They settle into a routine of snoozing, waking as they’re shaken and jolted by yet another stretch of rough track. And there are plenty of stops. The odd person gets on and off, but mainly they stop at unknown sidings with strange names like Morolana, Parachilna, Lyndhurst and Farina. Who’d have thought there were so many settlements way up here in the middle of nowhere! The Old Ghan continues to take on more freight or drop off some vital supply to its new owner.

With the train running through the night, the men appreciate the sleeper car. After all, it’s difficult to sleep on a wooden seat.

Sometime during the long night, the Old Ghan pulls into Farina. This is a major stopover. The loco is uncoupled and a fresh one hooked up, ready for work. Even the train crew swap over. Some of the passengers rouse and step off to stretch their legs. Most simply raise their heads briefly, then settle back into a fitful sleep.

Daylight arrives, first with a deep red glow then with an eye-squinting blast as the sun shoots over the horizon. Bleary eyes try to adjust to the brightness.

Marree comes into sight. The men have half an hour to check out the town as provisions are unloaded and the engine has a drink. They grab a hurried, yet welcome feed in the station’s refreshment room.

Now they’re well and truly into the desert plains country. Flat, dry and dusty with saltbush all around. And Marree is nothing more than an outpost. A pub, store and a few buildings.

Yet it’s a vital link in the chain for the Old Ghan line. For this marks the beginning of a 900km trek through forbidding desert country.

Next time: Following the water. Marree to Finke.

From Quorn to Marree, the Old Ghan travels through Nukunu, Banggarla and Kuyani Country.