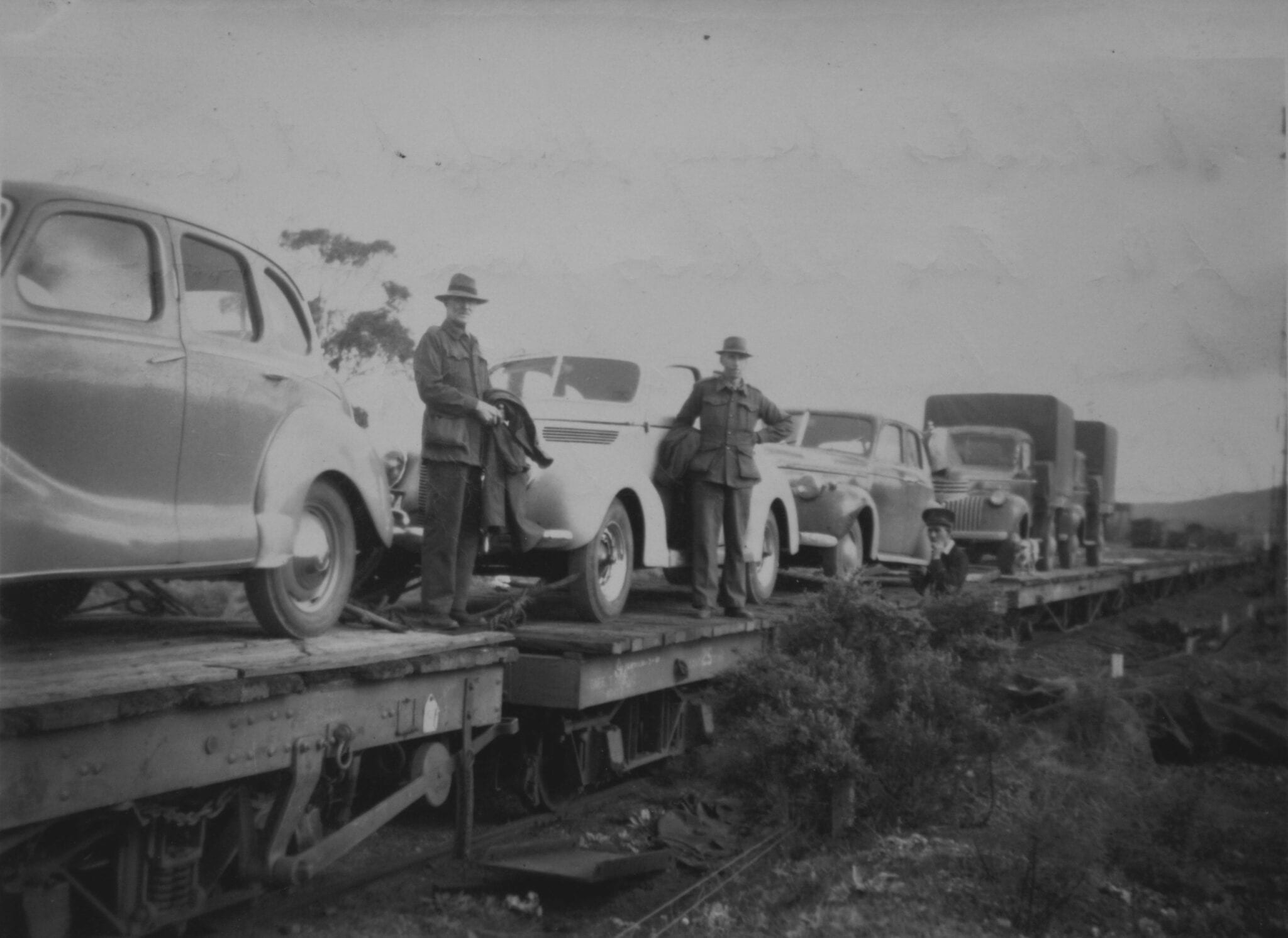 Step back in time to Autumn of 1950. You’ve just arrived at Quorn railway station. You’re about to embark on an epic journey through the centre of Australia on the Old Ghan.

There you are, standing outside the railway station in southern South Australia. You’ve already taken a week or so to travel from Canberra to here. Yes, you’ve escaped another cold Canberra winter, yet the cold wind blowing here reminds you of home.

Like you, Jim’s been employed short-term for this trip. He recently emigrated from Lithuania, a refugee from WWII.

He’s a strange bloke, you can’t quite figure him out. Word is, you and Trev will be teamed up with Jim to survey the Stuart Highway from Alice to Darwin. And Jim will be the boss because he actually knows what he’s doing… or something like that. This could get interesting.

You and Trev decide Jim needs a nickname. With nothing much to do on the train trip over from Canberra, you and Trev spend a fair bit of time coming up with something suitable. One way or another, you settle on the nickname “Fritz”. So forevermore, Jim is known to you and Trev as Fritz. More on this later.

By now you’re pretty comfortable with your travelling companions from Canberra. A couple of blokes have done these trips before. They’ve done their best to give you three newcomers an idea of what to expect.

Now you’re meeting the other four blokes from Natmap Melbourne for the first time, Dave Hocking, Phil Lennie, Ted Caspers and Reg Ford. Like the Canberra boys, two blokes have done this before with the other two yet to be blooded.

You feel a bit like a fish out of water.

You’re a ring-in. They needed a driver, mechanic and general dog’s body all rolled into one and you put your hand up for the job. They seem like a good bunch though, and you’re soon feeling comfortable with them.

Waiting For The Train

You hop in and help load the train. Six Natmap trucks loaded to the hilt with food, fuel, water and some really expensive-looking surveying equipment. You’re surprised at how many cars and trucks are already loaded onto the flatbed carriages.

You, Trev and Jim are assigned a Commer and a Chev truck for your Stuart Highway adventure. You have a soft spot for the reliable Chevrolets, having driven them in New Guinea during the war. The Commers… well not so much. They can be cantankerous beasts.

At the end of a long day everything is loaded, tied down and secure. From what you hear, they will have to be tied down well. The line to Alice Springs is pretty rough by all accounts.

“So where’s the rest of the train?” you ask. One of the more experienced men in your crew grins and tells you, “This is normal Gus, the Ghan’s never on time!”

After a couple of days, the Ghan arrives. The train is coupled together and your outback adventure starts in earnest.

And so this is how my father Graham’s (or Gus as he was nicknamed) adventure kicked off. He and his new-found workmates caught the Old Ghan from Quorn, all the way to Alice Springs.

They were surveying, using a new form of surveying called Laplace observations. You can read more about their work here.

At Alice, they split into three crews of three men. Two crews headed north-west into the desert, making for the Kimberley.

Dad’s crew headed north along the Stuart Highway, surveying it all the way to Darwin.

My main interest however, was following in Dad’s footsteps… tracing his journey on the Old Ghan from Quorn to Alice Springs. You see, I grew up with a few stories of Graham’s trip and a faded album of tiny photos of his adventures. As a child, I had a sense of peering into another world through these photos.

Fortunately, Graham had purchased a brand new state of the art Box Brownie camera and recorded his adventure on film.

Even better, Graham had written on the back of most photos after they were developed. So with the gracious help of Paul Wise, a retired Natmap employee who knew most of the men in Dad’s photos, we pieced together his trip.

But before we go on, let’s get to known a few of the blokes a bit better. The three main players we’re most interested in are Graham, Trev and Jim.

I said earlier that Graham and Trevor Trevillian were mates, having gone to school and grown up together in Canberra. And Trev was a cadet draftsman with Natmap.

They were “spirited” young men, two 27 year olds with dry wit and wry sense of humour. Both men had fought in New Guinea, so they probably considered a six month trip into the Red Centre as a walk in the park… a bit of an adventure.

Mind you, Trev wouldn’t have had much choice.

As a cadet, he would have been at the bottom of the pecking order. Most likely, he was told he was going and that’s that.

Graham on the other hand wasn’t a public servant. He was a farmer, working on the family dairy in Fyshwick and contract harvesting around the district with his brothers.

Trev probably told him about the temporary job as driver, mechanic  and “chief cook and bottle-washer” as Dad used to say. In other words, general dog’s-body.

We’re really not sure how Graham ended up with the job. We just know he found himself standing outside Quorn railway station one cool afternoon in late Autumn 1950.

A Clash Of Cultures

Dimitrius/Jim/Fritz was an interesting character.

It was Paul Wise who told me his real name and background. Jim was obviously highly educated and talented. No doubt, he was trying to cope with life in a new country after so much war and violence in his home country of Lithuania.

In hindsight “Fritz” is a cruel nickname, given Lithuania was invaded and occupied by the Germans in WWII. Politically correct, it isn’t…

Clearly there was a clash of cultures and personalities. With WWII so fresh in everyone’s minds, no doubt some tension, suspicion and animosity still existed. Never mind that Jim, Graham and Trev had all fought for the same side. Jim was an outsider, pure and simple.

And remember, Graham and Trev were born and raised in Canberra. It was hardly a melting pot of cultural exchanges at that time. If you were different, you were singled out. Come to think of it, not much has changed with the Australian psyche in this regard…

Despite the obvious differences of opinion, the three men successfully completed their mission to Darwin and return.

A New Era, A New Adventure

Sixty-eight years after Dad’s epic trip, my wife Peta and I followed the Old Ghan line all the way from Quorn SA to Alice Springs NT.

We were trying to get a sense of what this journey would have been like in 1950. We also wanted to confirm where some of the photos were taken. And the only way to do this was to jump in our truck and start driving north!

Next time: “All aboard!” The Old Ghan journey begins.  Quorn to Marree.

Quorn is on Nukunu Country.