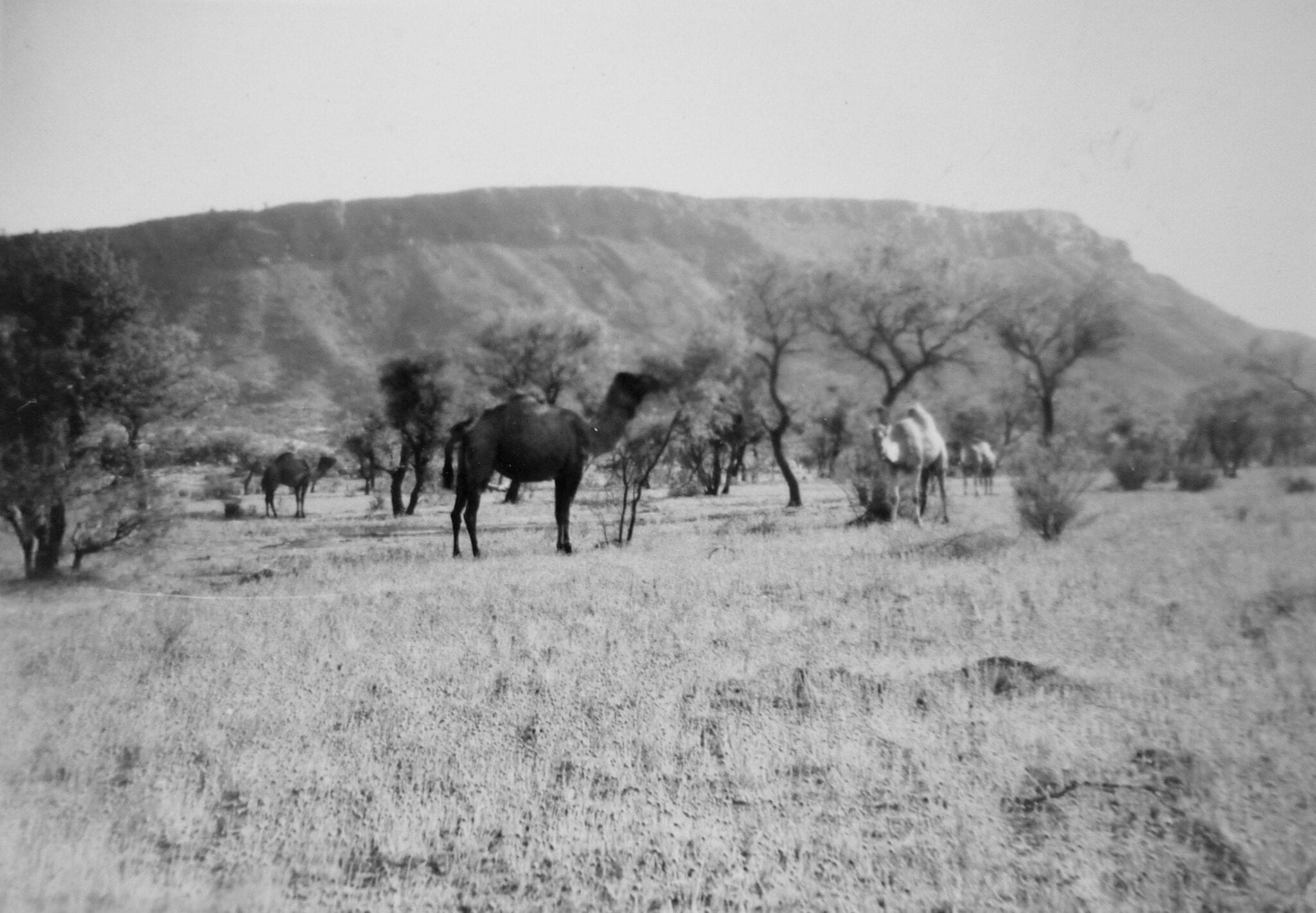 Last time, my father Graham and his travelling companions settled into their journey, crossed the SA/NT border and made good time to Finke.

We take up their story as the train pulls out of Finke.

Dad, Trev and their eight companions from the Natmap party knew everyone on the train by now. Just a handful had travelled the entire way, including three young ladies who were returning to Alice Springs after a holiday in Adelaide.

Most passengers caught the Ghan for one or two stops then jumped off again. Mind you, “one or two stops” on this line could mean a few hundred kilometres! Maybe they were hunting for work or catching up with friends, who knows.

A few were drovers who had “hit the town” and were heading back bush with their tails between their legs, flat broke.

And another small group had been on the train from the start, like the men from Natmap. By now they felt like old hands, veterans of the Ghan.

Somehow, a common bond had formed amongst the passengers, a sense of being on an epic journey together. Sure, the trip only lasted a couple of days if all went well. But they were in remote country and looked out for one another, as you do when you’re out there.

All things considered, Graham and Trev were enjoying this trip. And pretty soon it would be over, with just on 170 miles (280km) left before Alice. But the worst was yet to come.

An old drover who disembarked at Oodnadatta warned them of the final leg from Finke to Alice with his parting words, “I hope you blokes know how to use a shovel. You might be needing one on that track.”

For this was the notorious section which often disappeared under drifts of red sand. Fettlers at Engoordina, Bundooma, Rodinga and Ewaninga spent most of their working hours shovelling and scraping sand. An endless life of hardship.

And they had no escape from it. The fettlers huts were simple concrete bunkers, looking more like a prison than a home. Rather than the meticulously-built stone buildings further south constructed in earlier years, these were regulation government buildings… and obviously designed by a committee. Cheap, solid and like a furnace in Summer.

The men slept in sand, ate in sand and worked in sand. Relentless desert winds blew sand into their beds, their food, their faces. They were tough men living in tough conditions.

And it was this very country the Old Ghan was about to do battle with.

Pushing Through A Sea Of Sand Dunes

The train rattled across the Finke River bridge and dived headlong into the sand dunes. An endless sea of dunes in all directions.

Somehow the track didn’t sink into the sand and disappear from sight. Although it did buckle and dip, twisting in the heat and subsiding where the sand just wasn’t strong enough to hold the weight.

For the passengers, it felt like they were on a small boat in the middle of a slow-motion storm. Each sand dune crested and broke over them, pounding them this way and that.

Looking out the window, the scene was surreal. A heavy train running over soft sand simply wasn’t right. Their minds were telling them this was impossible, yet there they were.

The train struggled up long gradual embankments built entirely of soft sand. Some were 20 feet (6 metres) or more above the natural ground level, forming a long sloping incline over the tallest dunes. This was worse than crossing those steel bridges, for it looked like the embankments would give way at any moment.

Once each dune was crested, Graham and Trev could feel when the train had reached its tipping point and momentum was pushing it down the other side. The note of the engine would change and the deep vibrations coming through the carriages would stop. All would be briefly quiet, then they’d feel a lurch as the brakes came on.

Darkness came, not a moment too soon for many. The powerful locomotive kept up its battle against the sand time and time again. It was going to be a long night.

Daylight And A New World

The engine drivers’ eyes were red and watery, peering intently into the gloomy night for signs of track damage or sand drifts. And hopefully the cow-catcher would do its job if they encountered a wild camel.

None of the passengers slept much that night. The constant bucking and swaying made sleep near impossible. An other-world landscape was just out their windows. Huge shapes outlined by the pale moon hinted at the difficult terrain. Everyone felt the Central Australia desert cold gnawing at their bones as they tried to sleep.

Dawn arrived at last. Out to the right, “Look. Is that the MacDonnells?” The train had settled into its final run into Alice, mercifully free of sand dunes.

The early morning sun sparkled across the plains, warming a mob of camels. They kept a wary eye on this hissing monster, the same one that had put their ancestors out of a job.

More than one person was wishing the train would head straight for the Gap instead of the lazy westerly loop they were doing across the plains. Everyone was more than ready for this journey to end.

Despite a distinct lack of sleep for all on board, the carriages soon filled with the sounds of people talking and laughing animatedly as they always do when a trip’s about to end. A bunch of strangers thrown together 720 miles (1,200km) earlier were now friends.

Finally, finally. As the Ghan coughed and gurgled and spluttered through Heavitree Gap, Graham and Trev marvelled at the twisted and folded rock of the MacDonnell Ranges up close.

The engine backed off and rolled into Alice Springs station. The nine men from Natmap picked up their swags and stepped down onto firm ground. A chill morning air was losing its battle with the sun and today was turning out to be a perfect Autumn morning.

Welcome to the Alice!

Footnote: We drove the Old Ghan route, following the track from Port Augusta to Alice Springs. While the journey through to Oodnadatta is fairly easy in a modern 4WD, in places the Oodnadatta to Alice Springs leg is something else altogether… especially the Finke to Rodinga leg. Deep sand, endless corrugations and remote.

Be well prepared if you’re thinking of attempting this leg. Make sure your vehicle is in top condition and carry plenty of spare parts, food and water. And allow yourself plenty of time… you’ll need it!

From Finke to Alice Springs, the Old Ghan travels through Arrernte Country.