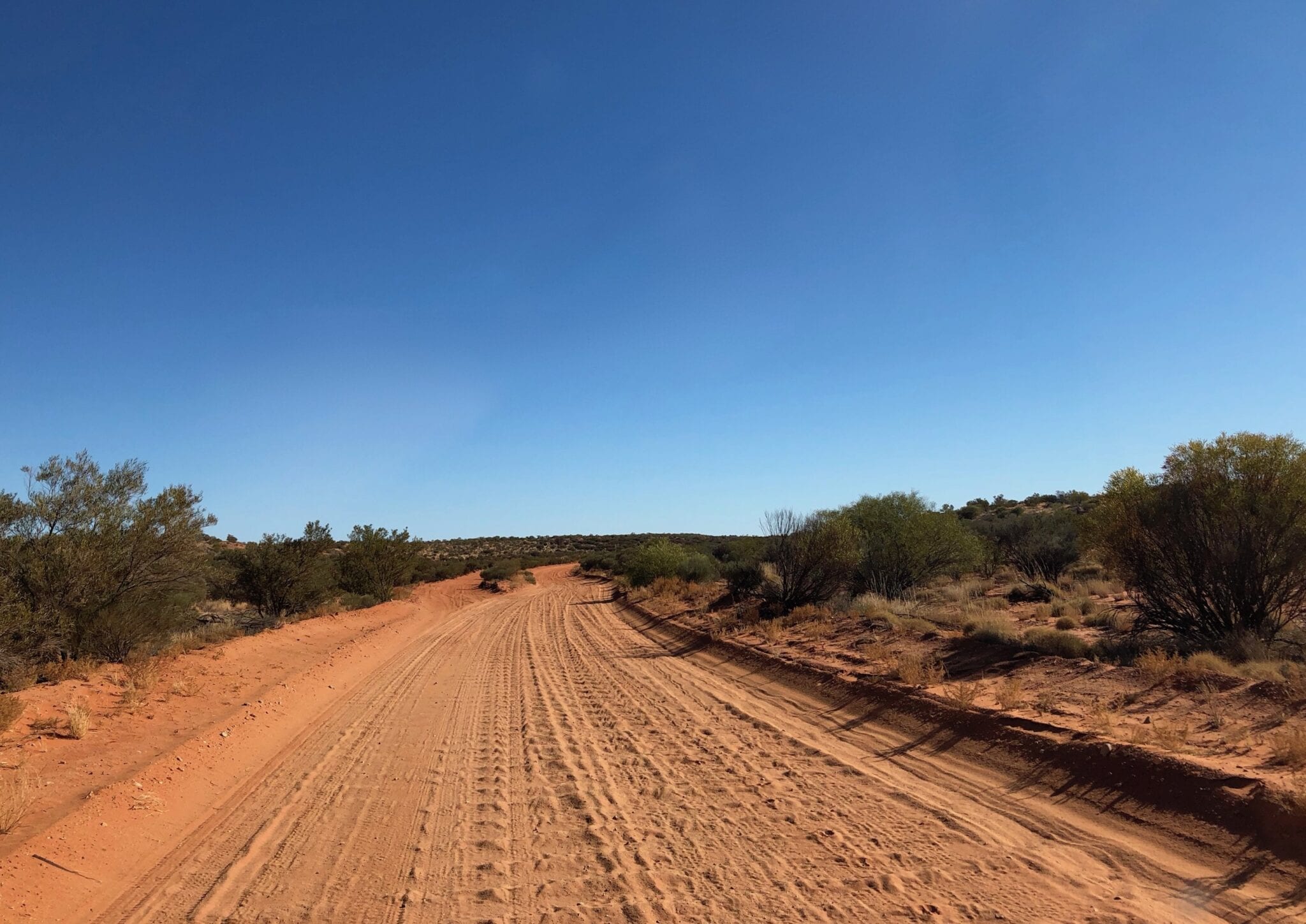 The Finke to Alice Springs Track, Survival of the Fittest!

As I changed down a gear and planted my foot to the floor, we were greeted with an unwelcome sight. A vehicle appeared over the crest of the sand dune, coming towards us. I had nowhere to go and couldn’t stop.

We were grinding up yet another long incline on the Finke track, pushing through deep sand in high range 4WD. Two deep wheel tracks followed the narrow embankment with steep drop-offs either side… and no chance of getting started again if we stopped.

A quick call on the UHF, and the approaching vehicle pulled off to the side to let us through. Phew!

Welcome to the Finke track between Finke and Alice Springs!

We were following the Old Ghan railway from Quorn in South Australia through to Alice Springs. And now we were travelling through deep sand, a section of the Old Ghan rail line notorious for being regularly buried in sand drifts.

And we could see why. The red sand is bottomless with no firm base at all.

This section is famous for the legendary Finke Desert Race, held every year on the June long weekend. This is billed as one of the toughest races in the world, and rightly so. Held over 2 days, over 600 competitors race from Alice Springs to Aputula (Finke) on Day 1. Then they turn around and do it all again the following day, back to Alice Springs.

The total distance is 460km of brutal power-sapping sand driving. The track is 230km of continual humps and dips, some of which are larger than a car… as we discovered. More on this later.

The worst of the track is between Finke and Rodinga, which is just north of the Titjikala community. This goes for about 130 very long kilometres. After this, the road to Alice Springs improves.

Be warned though. The entire road can be a nightmare of huge corrugations if you happen to drive it after the Finke Desert Race.

Thousands of spectators line the racetrack, all the way from Alice Springs to Finke. Most camp along the track, spending the weekend camped in the desert.  Then you have service crew vehicles, officials, media and so on, all using the track. So it’s in bad shape after the Finke Desert Race.

Leaving Finke, we were greeted with huge corrugations pretty well straight away. One of the locals at Finke told us the track was pretty bad for about 60km then improved. Either he hadn’t been on the track for ages or he was making it up!

I mentioned earlier that the track runs on the Old Ghan line along this section. This does make sense, as the rail line already had embankments and cuttings through the dunes. There is a downside though. Six inch long steel stakes (the ones used to hold the rails to the sleepers) are littered along the track, just waiting to hitch a ride in your tyres.

Worst of all, we couldn’t get up any speed to get on top of the enormous corrugations. The deep sand made sure of this. So our first three hours were spent driving at 20km/h or less, pounding over relentless corrugations.

One section actually improved for about 10 kilometres and we were able to get up some speed. Then as luck would have it, we met a group of six 4WDs coming the other way.

Given we’d just spent 3 hours at walking pace, I needed to maintain speed or we’d be back to square one. So I raced past them, desperately trying to keep our speed up. Then the UHF chatter started about the maniac in the truck. If only they knew what we’d just experienced…

Approaching the larger dunes, the Old Ghan track was built on long embankments of sand to ease the grade. These are narrow, with two heavily corrugated wheel tracks in deep sand. Some of the embankments drop off several metres either side and were built just wide enough to fit a narrow gauge train line.

Combined, it makes for a hair-raising drive at times… at least it does when you’re in a truck!

Taking On The Racetrack

After a couple of hours pounding along the track at 20km/h, the racetrack started to look inviting. Sure it was full of what can be best described as sand moguls, however the surface wasn’t corrugated.

It was too tempting to resist.

We crossed onto the racetrack and all was well for a few kilometres. We bounced up and down over the sand moguls, relieved to be free of the corrugations.

But then the sand became deeper and deeper… and deeper. The truck kept grinding through. We were committed. We couldn’t get off the racetrack, we couldn’t stop, we couldn’t turn around.

Then we encountered a massive dish-shaped hole, way bigger than our truck. We clung to the left side until it threatened to tip us over. The only option was to steer right and drop down into and across the hole, hoping the right front wheel wouldn’t bite into the deep sand and flip us over.

Fortunately we made it out. And funnily enough, the corrugated track didn’t look like such a bad option any more! So back onto the track at the first opportunity, take a few deep breaths and keep walking over the corrugations.

It turned out we left the racetrack just in time. After this, it climbed massive sand dunes with some of the huge holes having near-vertical walls.

So now’s a good time for a word of advice. No matter how inviting the racetrack looks, don’t be tempted!

The Finke racetrack isn’t the only track that claims its fair share of victims. About 30km south of Titjikala, we encountered three 4WDs. One had its front right wheel ripped off. A ball joint had snapped and speared the old Prado into a bank.

A gentleman named Paul was trying to fix it with spare parts ratted off a wreck. He had come up from Aputula (Finke) community to help. Watching on were four ladies and a daughter, all from nearby Titjikala community.

So we spent a few hours helping Paul put it all back together. Tools, parts and bolts regularly disappeared into the deep sand. After some digging and sifting, they would eventually reappear.

There was no way Paul could have done this job on his own. It was one of those jobs where you need three or four hands. Poor old Paul had been working on it for a day and a half by himself, while the ladies provided free advice from the other side of the road!

It was good to be able to help out and a lot of fun listening to the endless banter from the ladies. Although I couldn’t help but wonder why the two groups of multiple vehicles we had passed earlier hadn’t stopped to lend a hand…

With the Prado back together, they were on their way. Sure it had no brakes anymore, the odd bolt was missing and the bumper bar was now held on with cable ties, but at least it was mobile again.

We had intended to visit Chambers Pillar, but the day was nearly over. So we decided to camp at Rodinga ruin instead. You can read more about the fettlers’ living conditions amongst the sand dunes here.

Back Onto The Road

Once past Rodinga, the track became a road. It was in reasonable condition, a few rough patches but nothing too bad. As you travel north, the sand dunes give way to low ranges.

You’re on the home stretch now. And believe me, there was no better sight than seeing the MacDonnell Ranges in the distance.

The Finke to Alice Springs track is horrible, at least between Finke and Titjikala. However, it’s an incredible drive through sand dune country. There’s something about the Red Centre that keeps drawing us back.

This is one of those roads you swear you’ll never even contemplate driving on again, ever. Then after a while, the memories fade and you’re thinking, “It wasn’t that bad. Maybe we’ll do it again…”

TourRadar have a Central Australian discovery tour which runs through some of the country mentioned in this article.

The Finke to Alice Springs track is on Arrernte Country.