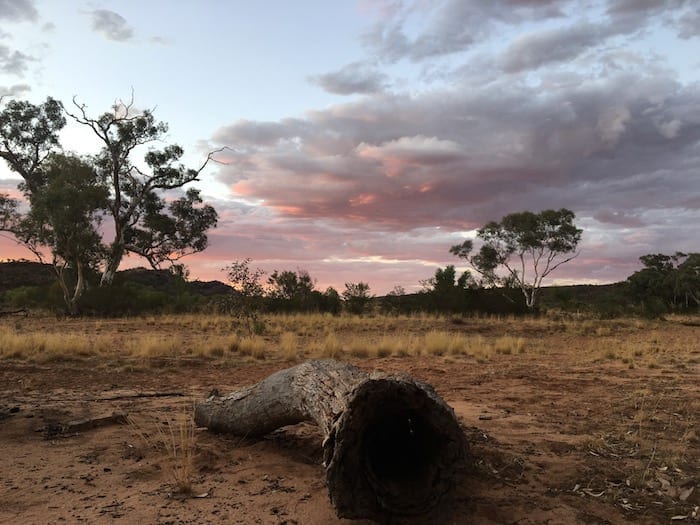 You set out from White Cliffs with a plan to stay at Mutawintji National Park. It’s only about 150km away – an easy day. Or maybe not…

The road snakes around and over harsh rocky range country. Red sand, red rock, white rock and reefs of rock across the road. Hundreds of small watercourses make their way down the sides of the ranges and you have to cross every one of them. Of course, each one is different – some you don’t slow down for but most you treat with utmost respect.

The road hadn’t been graded for a long time either, so we were kept on our toes by the corrugations mixed with large rocks. Trying to drive along the edge of the road was a failure too. Recent rain had created thousands of small wash-aways on the edges.

The turn-off to Mutawintji National Park was a welcome site.

You’d be hard-pressed not to find a great camp spot at Homestead Creek Campground. Lots of camping sites and plenty of shade under young river red gums. They are nicknamed “widow makers” for a good reason, so use your commonsense. Occasionally they’ll decide they have one too many branches and will drop one without warning.

In fact, you’re spoilt here… hot showers and flushing toilets. Who could ask for more?

If you’re still not satisfied, wait for the sunset.

In The Time Before The White Man

The Bynguano Ranges within Mutawintji National Park are the traditional lands of the Malyankapa and Pandjikali people. These people sustainably managed the water and natural food supplies for at least 8,000 years.

It’s incredible to see the contrast between the lands in Mutawintji compared to the surrounding arid desert country… even now, after sheep and rabbits irreparably damaged the local environment. The valleys and gullies are thick with river red gums – a tree better known along the banks of the Murray and Darling River systems. You can only imagine what it must have been like before the White Man. Mutawintji means “green grass and waterholes” – it’s easy to see why it was named so.

Unfortunately Mutawintji’s colonisation by the whitefella is a familiar tale of dispossession and takeover. Burke and Wills inadvertently opened up the area in 1860. Wills considered it to be “a place of gloomy gullies”. Did he actually have his eyes open?

Squatters appeared in the 1870s and basically plundered the place. They sunk tanks, dug bores and used the permanent waterholes to run huge mobs of sheep. A combination of sheep, rabbits and the massive drought at the turn of the century meant this country was decimated. Once the fragile topsoil was exposed it simply blew away.

Traditional owners were treated harshly, forced to rely on paltry rations. Their kids were often taken away to work on distant stations and white-man diseases took a heavy toll. It’s a heart breaking story, repeated all around Australia. Thousands of years of continual occupation and sustainable land management destroyed in a few short years.

The sheep and rabbits are gone but the area is now thick with goats. These “carp of the cliffs” eat everything – everything from ground level, up to the height that a goat can reach standing on its hind legs.

What To See And Do

Mutawintji National Park offers plenty of variety for we travellers. There’s an historical tour, lots of amazing walks, self-drives to view some of the colonial history, and of course the incredible scenery.

What’s now known as the Mutawintji Historical Site was a special ceremonial place. Over 1,000 people would travel to this site from places afar, joining in these special occasions.

Drive North past the campground and follow the road to the end. The road becomes a dirt track. This was once a busy road, the Old Coach Road between Broken Hill and White Cliffs.

Miners seeking their fortune either rode, walked or caught a lift on the Mail Coach. In the 1890s, enterprising local grazier Charles Raven opened a pub. It became known as the Rockholes Hotel. Now a ruin, it stood on the edge of the road on a hot and rocky ridge. Can’t imagine living there in the middle of summer, let alone walking from Broken Hill to White Cliffs!

The only way to really appreciate this place is on foot. Some fantastic walks branch out from the campground. They’re all clearly signposted and frequent markers clearly show you the way.

Of course, take plenty of water, sunscreen, hat and decent footwear. It can be very hot on open ground… or cold, as we discovered. More on this later.

We awoke before dawn and set out at first light. After a short walk across open ground, you’re drawn into the magnificent gorges and gullies. You’re soon looking at an area where the original inhabitants used hard rock to create stone tips for spears and knives. It’s littered with fine chips of white stone. A painstaking and highly skilled profession.

A little further on is Indigenous rock art. Signs explain the meaning of the paintings. One particular painting signifies this as a culturally significant area.

At odds with the rock art are blue triangles with “WW LIX” and “WW LX11”, markers made by William Wright in 1859 and 1862. Wright was support group leader for the 1860 Burke and Wills expedition and managed a property at Menindee (south of Mutawintji). It was Wright who returned in 1862 to explore the area for grazing country.

Early morning sunlight began to light the tops of the rock walls as we moved deeper into the gorge. Dull walls were transformed into brilliant orange. This seemed to be a signal for enormous wedge-tailed eagles to commence pre-flight checks. We watched one huge wedgie give his wings a test flap, then launch off a gnarled cypress pine at the top of a cliff. Pretty soon four wedgies had joined forces and were taking advantage of the early morning thermals. Spectacular.

A little further on are stone etchings. These depict food sources – frogs, kangaroos and goannas. Stone etching requires special skills and is downright difficult. I often marvel at these artisans from thousands of years ago and wonder how much they’d have in common with modern artists. Quite a lot, I suspect…

At this point, you can branch off and take different walks. Of course, we chose the longest one… but what a walk! It’s called the Bynguano Range Walk and is about 8km long. You rise out of the gorge, up a sloped rock face. While ascending, you follow a creek bed carved into solid rock. I’m guessing this creek took a while to form – like hundreds of thousands of years. Small rock pools periodically arrest the flow of water as it descends the rock slope.

Once you crest the ridge, a magnificent panorama unfolds. The ridge drops away sharply to yet more deep gorges. It seems like Mutawintji goes on forever. And look back over your shoulder – those beautiful gorges you walked through earlier now seem tiny and insignificant.

The track follows the ridgeline for a kilometre or so. It’s quite exposed – in fact, we were actually cold along this stretch and kept moving to keep warm. However you’d be cooked alive on a hot day.

You descend into another gorge and follow a creek all the way back to the start of the loop. Along the way you’ll see magnificent waterholes, rock formations, stark rock faces, even a short descent by rope! Evidence of a recent flood was everywhere. Flood rubbish was piled up against river red gums and banks were eroded. Even so, we saw no surface water at all. No doubt water would be available if you knew where to dig into the sand.

Mutawintji Gorge Walk is a 6km return walk. It takes about 2 hours in total. The track is mostly flat until you’re deep into the gorge. At this point, you’ll need to clamber over rocks.

We’ve been to Mutawintji several times now, from terrible drought to the best of seasons. This time, the season was fantastic. So instead of crossing a barren flat on the first part of the walk, we were walking through grasses and wildflowers.

Then we reached the creek and were blown away by the deep green plants under a thick canopy of river red gum saplings. Even the normally sparse sandstone hills were covered in grasses and many species of low bushes.

So once we reached the gorge, it was no surprise to see lots of waterholes. The creek was even running in places (just a trickle).

As you walk up the gorge, the red sandstone walls get taller and gradually close in. The wind dropped and the only sounds were birds overhead. Two crazy pink cockatoos dipped and wheeled as they screeched over us.

Then it was silent.

We reached the large waterhole at the top end of the gorge and sat there for ages. This is once of those quiet, spiritual places where it almost feels rude to break the silence.

The last hundred metres or so is a reasonably strenuous clamber over large rocks. However, there’s a way through if you take your time. It’s 100% worth the effort to experience the stunning waterhole at the top end of the gorge.

This is a must-do Mutawintji walk.

Split Rock… or Not

Split Rock walk starts at the northern end of the park. It’s about 6km return and takes about 2 hours. Well, it would if I hadn’t decided to take a wrong turn…

After about 500 metres, the track splits. The left fork used to go to Albert Goldfields at Milparinka, while the right fork continued to White Cliffs. Follow the right fork.

Roughly one kilometre later, the track veers left while a lesser track veers right. Take the left fork past New Tank, then ultimately to Split Rock.

Please note: Split Rock is a Women’s Business site. The traditional owners request that males stay at least 100 metres away from the site itself.

This walk is within the Mutawintji Wilderness Area. None of the trails are marked. If you’re planning an extended hike, register your intentions at NSWParks.info/trek or call Broken Hill NPWS on 08 8084 2880.

Anyway, stupid me decided the lesser track to the right was the way to go. We crossed the creek and followed the track up into the ranges. After cresting a high hill, we decided that maybe I was in fact leading us into trouble.

With the advantage of height, we could see our destination was most likely a few kilometres to our left, across a wide valley. But it was getting a bit late in the day to trek across the valley.

At this point, we clambered down into the valley and followed the creek all the way back to the picnic area. Better to admit defeat than to be lost in the dark!

So even though this goes down in history as yet another epic navigational fail by me, it was a spectacular walk. I can certainly understand why keen hikers trek out here. Oh, and I can also understand why Peta does the navigating…

Coming Back For More

We’ll be coming back here, for sure. We missed the Western Ridge Walking Track and we’ll be doing the Bynguano Range Walk again.

Mutawintji is one of those places that keeps calling you back. This was our third visit. Once you come here, you’ll be back again. It’s a spiritual place – a gentle heart in an unforgiving landscape.