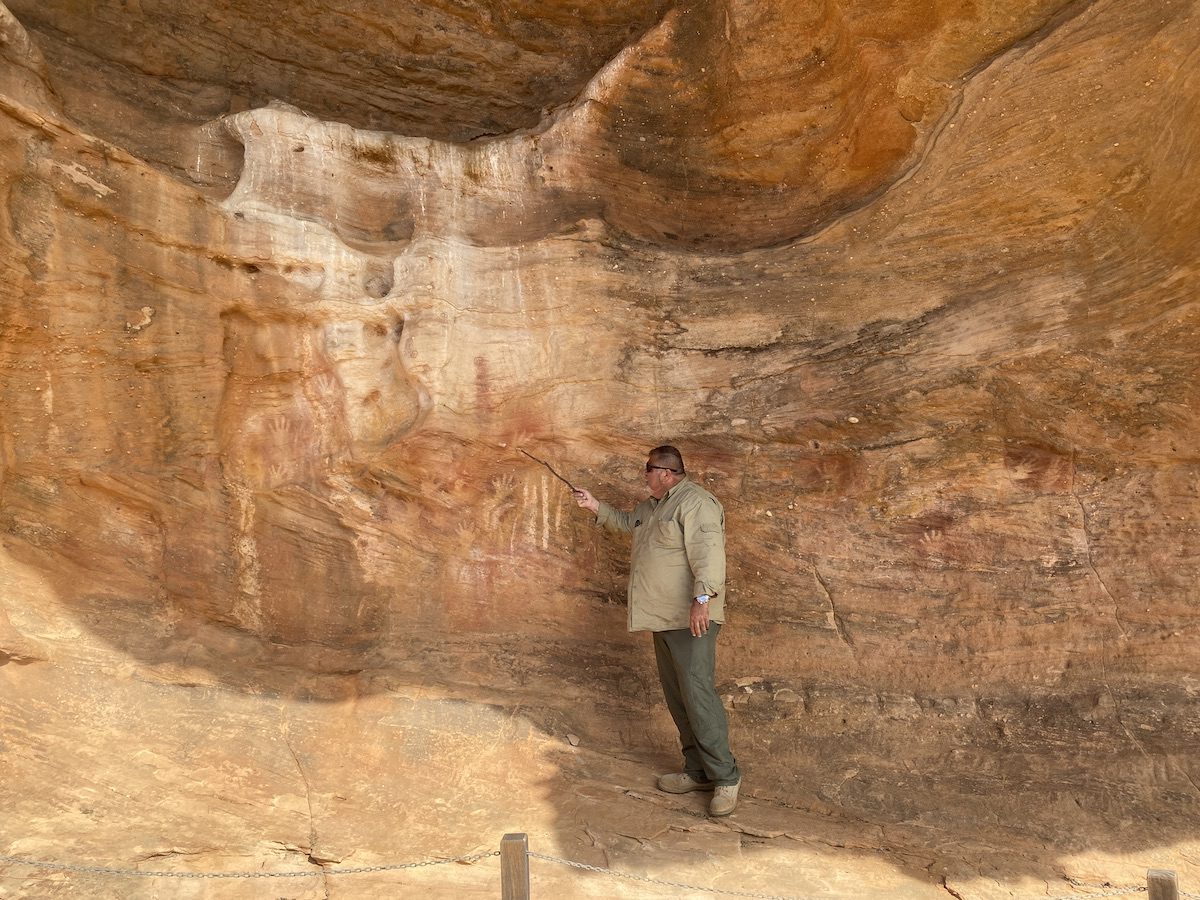 Mutawintji National Park in Western NSW is a critical cultural meeting place for First Nations people.  When conditions were right, thousands of people would meet at Mutawintji for cultural and ceremonial exchanges.

About 6km north of Homestead Creek Campground in Mutawintji National Park, is the Mutawintji Historic Site. Access is restricted and it has a locked gate.

(Want to know more about Mutawintji National Park? Go here for a round-up of how to get there, where to camp, what to see and do, and more).

We joined the Kulluwirri Dreaming Tour, which takes visitors into this special place. Our tour guide was Mark Sutton. He’s a Malyankapa man and has an incredibly broad knowledge of Mutawintji First Nations history, white exploration, botany, and everything in between.

Mark is an exceptional tour guide and has a knack for bringing stories and history to life. This was by far the most informative and fascinating cultural tour we’ve been on.

Mutawintji broadly consists of four large valleys between sandstone hills. Each of these valleys is significant to the Wiimpatja people. However, the Historic Site has particular significance.

Large ceremonies were held in this valley for thousands of years. Mobs would gather from far and wide, converging on the site when the Wiimpatja elders agreed the season was good enough to feed the thousand or more people who would gather for ceremonies.

But until 1983, this valley was the main National Parks camping area. The valley has important men’s areas and women’s areas, which tourists were free to enter.

National Parks also built a visitor centre (now the Cultural Centre) and had a person living on site full time. This was in direction contravention of Aboriginal lore, which decreed no person could live in this special valley.

And as a final insult, National Parks built a viewing platform midway up a rocky slope, which is home to over two thousand stunning rock etchings… and the access path was straight over the top of the etchings.

By 1983, the traditional owners took matters into their own hands. They blockaded the gate and demanded a voice in management of the Park.

Finally in September 1998, the NSW Government handed Mutawintji National Park back to the original custodians and gave them a majority say in its management. Thankfully, Mutawintji is now back in the hands of those who have cared for this Country for tens of thousands of years.

So what should you expect on the Kulluwirru Dreaming tour?

Reading The Lore on the Walls

The tour starts in the Cultural Centre. Mark runs through a brief white history of exploration in the region… Major Mitchell, Ernest Giles, Burke and Wills.

Then you’ll watch an excellent dreaming story of how the Aboriginal “god” Kulluwirru created this Country. This song line ranges from Mutawintji to Broken Hill, up to Mt Arrowsmith (in the Barrier Ranges) then back to Mutawintji.

It warns of the perils of ignoring tribal law and the consequences.

By the way, Mutawintji (pronounced Moot-awintji by the Wiimpatja and Mut-awintji by the Barkandji to the east) means “place of green grass and waterholes”. Muta is a type of grass, which was shooting when we were there. Wintji means place.

Then Mark took us up to a stunning collection of rock “art”… rock stories is a more accurate description. He explained what some of the stencils, etchings, paintings, and prints of the Clever Man mean.

You begin to see a story unfold of the surrounding Country and the people who lived here. As ignorant whitefellas, Mark can only give us a tiny inkling into the stories’ meanings. These stories are incredibly complex and have many layers, depending on your status in the tribe and whether you’re male or female.

These sandstone walls play a part in recording the lore of the local people… the rules, the history, their moral compass.

Inevitably, over the years idiots (including William Wright who was part of the Burke and Wills expedition) have added their own graffiti, damaged paintings, or even coloured in etchings so they’d show up better in black and white photos.

Now, the endless goats are doing the most damage. Their hard hooves gouge out the sandstone and have obliterated much of the art just above ground level.

On our walk to and from the rock art, Mark showed us a few of the local plants and their uses.

Mutawintji Historic Site is one of the few places which still has large trees. The steam mining equipment at Broken Hill mine demanded endless supplies of wood. As a result, all the big trees are gone within about a 90km radius of Broken Hill… even further to the north.

Fortunately Mutawintji was at the edge of the timber-getters’ range when petrol and diesel engines displaced steam. So it was spared the worst of the clear-felling. Sadly, the large beefwood trees are a rare sight around Broken Hill now.

The second part of the tour took us to the incredible display of rock etchings. They’re up a gully, laid out on a sandstone slope. Apparently, there are over two thousand etchings. An archeologist made tracings of every single one, to preserve their history and to study them.

Mark explained how etchings run from the Kimberley down through Western Australia, across parts of South Australia, before ending right here at Mutawintji. This priceless display is the easternmost reach of rock etchings.

The Kulluwirru Dreaming tour is absolutely fantastic. Mark has the ability to explain complex concepts simply, and to weave colonial history into Mutawintji. It is after all, part of this Country’s story… even if it’s a rather bleak end-note to an otherwise vibrant history.

You can book the Kulluwirru Dreaming tour through Mutawintji Heritage Tours. Call 0448 708 878 or book online here.

Note: We have no affiliation with Mutawintji Heritage Tours. We paid full price for this tour as private citizens.