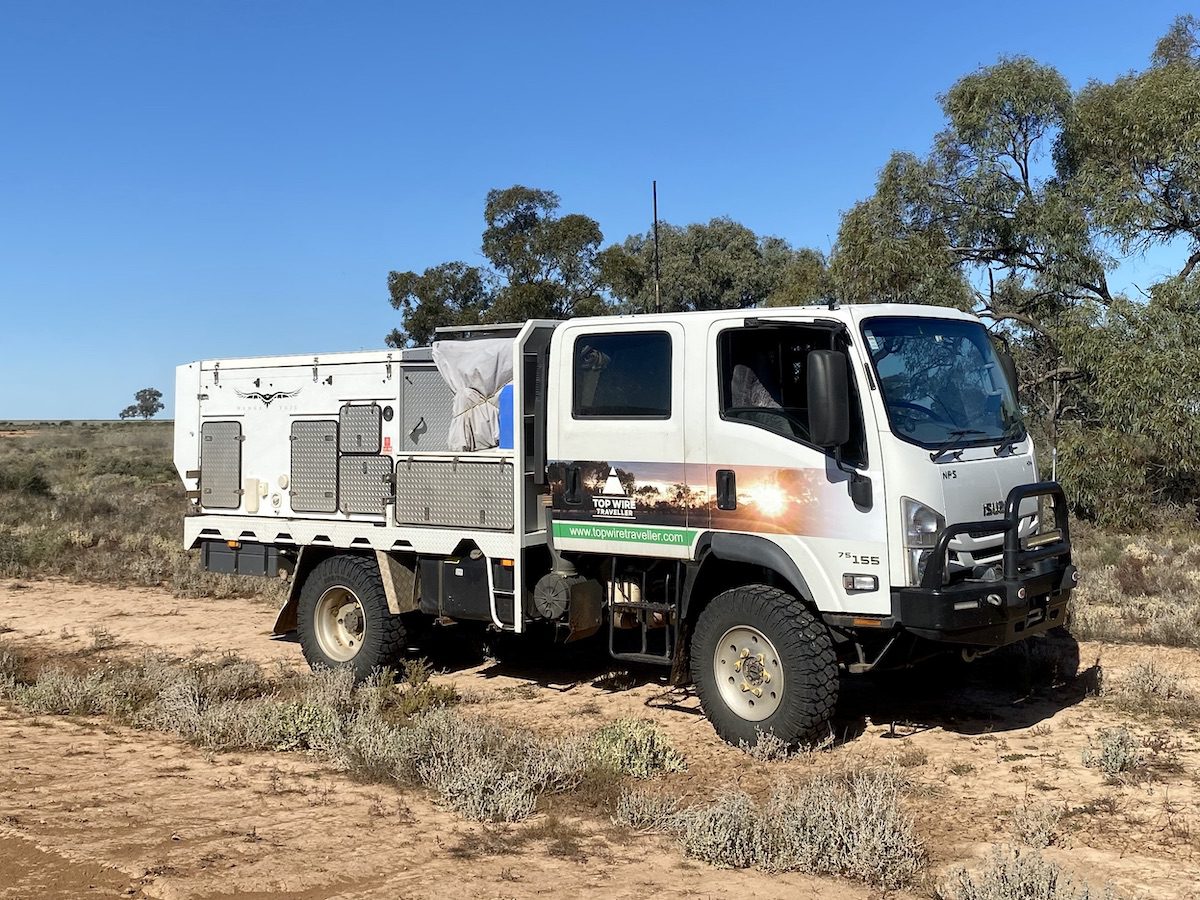 We live in it full-time, only travelling back home occasionally when the need arises. Whenever we can, we take dirt roads over tarred roads… not so easy this past year with all the rain about.

We do a review every year, listing any issues or major modifications. Here’s the links to previous reviews:

Now it’s time for an update… what’s happened in the last 12 months? Has it been reliable and have we had any issues? Let’s find out.

“Where Has the Truck Been in the Last Year?”

We’ve done plenty of dirt roads in the past year. For nearly six months, we meandered around outback Queensland due to Covid border restrictions. However, we did manage to get into South Australia and western NSW as well.

It’s been a busy year!

As seems to be the way with us, many of those trips have been over rough and badly corrugated roads. The odometer is at 185,000km, which means we did 27,000km in the last 12 months.

This averages out to just under 31,000km a year since new.

Yes, our first major one. While travelling on the rough roads of Rinyirru (Lakefield) National Park, the front left lower shock absorber mounting bracket snapped off.

I knew these were a weak point, so I’d been keeping an eye on them. Although not close enough as it turns out. Once the bracket snapped through, it was obvious they’d been cracked for quite a while.

What caused it? Well, the final straw was us hitting several hidden washouts one after the other, while trying to get off the road for on-coming motorbikes.

Long term, it would have been an accumulation of lots of driving on rough roads. As I said, it’s a known problem and I should have had them reinforced before they snapped. It’s a crappy design, no doubt.

The rear lower shock mounting brackets are also a known weakness. So keep a close eye on them as well.

I also strongly suspect the Bilstein shocks were too firm on the compression stroke. The Bilsteins were light years better than the original Powerdown shocks, but they were pretty stiff.

In hindsight I should have taken them back to the Bilstein supplier to soften them up a bit. However, I wasn’t too impressed with their service at the time so didn’t get it done.

One surprising outcome from this little adventure…

I removed the shock, then we drove to Cooktown across some horribly corrugated roads on three shocks. After that, we drove to Cairns via the Bloomfield Track and through the Daintree on tar.

There was absolutely zero change in the truck’s handling… except for a softer ride! No lean in corners, no nasty rebounds on corrugations, no chattering of the front wheel, no nasty feedback through the steering wheel, no change under heavy braking.

Nothing at all, except for a much better quality ride. I could have left it with just one front shock and comfortably driven it forever.

It was after this I decided the Bilstein shocks were way too hard.

By the way. A big thanks to Murray Young in Cairns for pointing me to a fantastic repair shop in Cairns, who did a great job. I’m not sure they want to be inundated with extra work, so I won’t name them here.

We’re had two repairs and one replacement in Year 6. The first obviously, was finding a replacement for the Bilsteins.

After the front left shock mount failure and the experience of a better ride with only three shocks, I decided to bite the bullet.

A quick call to Brad Zacka at King Shocks and a new set with remote reservoirs were on their way.

Why King Shocks? I know several people who use them successfully in the brutal, car-breaking world of cross-country racing. I’ve never seen one fail and their multiple levels of adjustment mean they can be tuned to the vehicle.

On top of this, the piston rods are huge. King Shocks also use large rod eyes with spacers at each end wherever possible, instead of rubber bushes. And the shocks are fully re-buildable.

Their attention to detail is fantastic. Even down to small but important details like an inner sleeve on the top front bushes. This prevents the bushes being over-squashed and damaged. It’s these details which are critical for long life and reliability.

When you look at the photos, you might be wondering a few things. Like why did I mount the rear shocks with the remote reservoirs facing forwards? Why not flip them 180° so the reservoirs could sit facing the back?

Well, I wanted to keep the rubber boots up high, out of the way of stones. To protect the shocks, I simply fitted a piece of closed cell neoprene rubber held on with giant cable ties and split corrugated tubing to protect the cable ties. This simple setup has worked perfectly.

And why not have rubber boots on the front shocks? Two reasons. Firstly, when I installed the shocks I didn’t fit the boots. The shocks came supplied with protection shields. Secondly, the rods don’t get showered with stones at the front… unlike the rear shocks.

I should fit the front boots – I just need to get around to it.

The difference in ride quality is unbelievable. If I bought another truck, they’d be Item #1 on the list. To be fair to Bilstein, they also made a big difference to ride quality. However, the ride with the King Shocks is next level.

And they hardly get warm, even over long stretches of corrugations. They’re an impressive piece of gear, no doubt about that.

One other surprise replacement was the tie rod ends for the steering arms.

One of our readers Simon mentioned he’d had an issue with front tyres scalloping. He tracked it down to a worn tie rod end.

I keep a good eye on everything around and under the truck, tie rod ends included. But after Simon’s comment I had a closer look at them. A tell-tale smear of grease on two of the four tie rod ends turned out to be split boots. (Thanks for the heads-up Simon).

I was a bit surprised the rubber perished after only 180,000km and six years. But then again, I suppose the truck has been in some pretty harsh environments.

While the tie rod ends were still okay, it was definitely time to replace them. It’s an expensive exercise, mainly because it involves a wheel alignment.

Ballarat Isuzu replaced the tie rod ends then drove it to Sunshine (an outer Melbourne suburb) for a well-overdue wheel alignment. (A free plug for Ballarat Isuzu here. Their service is excellent, highly recommend).

What a difference! It felt like a new truck.

For whatever reason, the wheel alignment changed the ride significantly. I can’t explain that one…

It’ll be interesting to see if it also helps with the issue of the front tyres scalloping. Although it might be difficult to tell, because we’ve changed tyre brands.

With Toyo Tyres out of the Australian market, I was trying to find a viable 19.5” tyre replacement.

My main concern was having to fork out a pile of cash for the unproven Founders tyres. Plus I wasn’t too excited about going to mud tyres from all-terrains. After discussing this with All Terrain Warriors, they generously offered us a set to trial.

Go here to read our initial impressions of our new Founders tyres.

Like our experience with the King Shocks, the Founders are a step-change in ride quality improvement.

King Shocks and Founders tyres work incredibly well together. Founders are softer than the Toyos, so they’re bouncier. The King Shocks catch this bounce quickly and dampen it out.

The result is a much-improved ride… and light-years ahead of the Toyo/Bilstein combination.

We’ll do a review of the Founders tyres every ten thousand kilometres, to let you know how they’re going. So far, so good. In fact, I can’t imagine going back to a firmer tyre like the Toyo tyres.

Nothing this year. We’re super-happy with the current setup.

Last year we did big changes to the rear seat area and the storage boxes on the tray, as we detailed here. At the time, it felt like we’d successfully moved some weight off the rear axle onto the front axle.

However, this isn’t the case.

Before the changes, we were running around 2.8T over the front and 3.8T over the rear axle. After a trip over a weighbridge, I was surprised to find the weight distribution hasn’t changed at all.

I must have been imagining things when I thought the ride had improved over the front axle. Oh well…

I keep dreaming about fitting a suspension seat to the passenger’s side. Maybe one day, maybe not.

None at all. Regular services by Isuzu, regular checks by me and that’s it.

“Would You Buy Another 4WD Truck?”

Yes, we’re still extremely happy with our Isuzu 4WD truck. Isuzu’s legendary reliability is proving to be true. We’d buy another one in a heartbeat.

Having said this, the truck’s only done 185,000km. So it’s hardly even run in. But they’ve been hard miles, and mostly loaded.

What’s impressive is the build quality. Being a simple design, there’s not a lot to go wrong… which was one of the main reasons why we chose this truck in the first place.

Since we bought our truck, small 4WD trucks have exploded in popularity. People are realising the benefits of them.

However, it seems some people expect them to drive like a 4WD ute or wagon. They won’t and they never will.

These trucks are built tough, solid, and simple. Their primary market is South-East Asia where they’re flogged hard every day… and expected to survive unscathed.

If you’re thinking of buying one, keep in mind it’s a truck. A small truck, but still a truck. They’re slow, basic and relatively rough.

But they’re also a lot of fun!