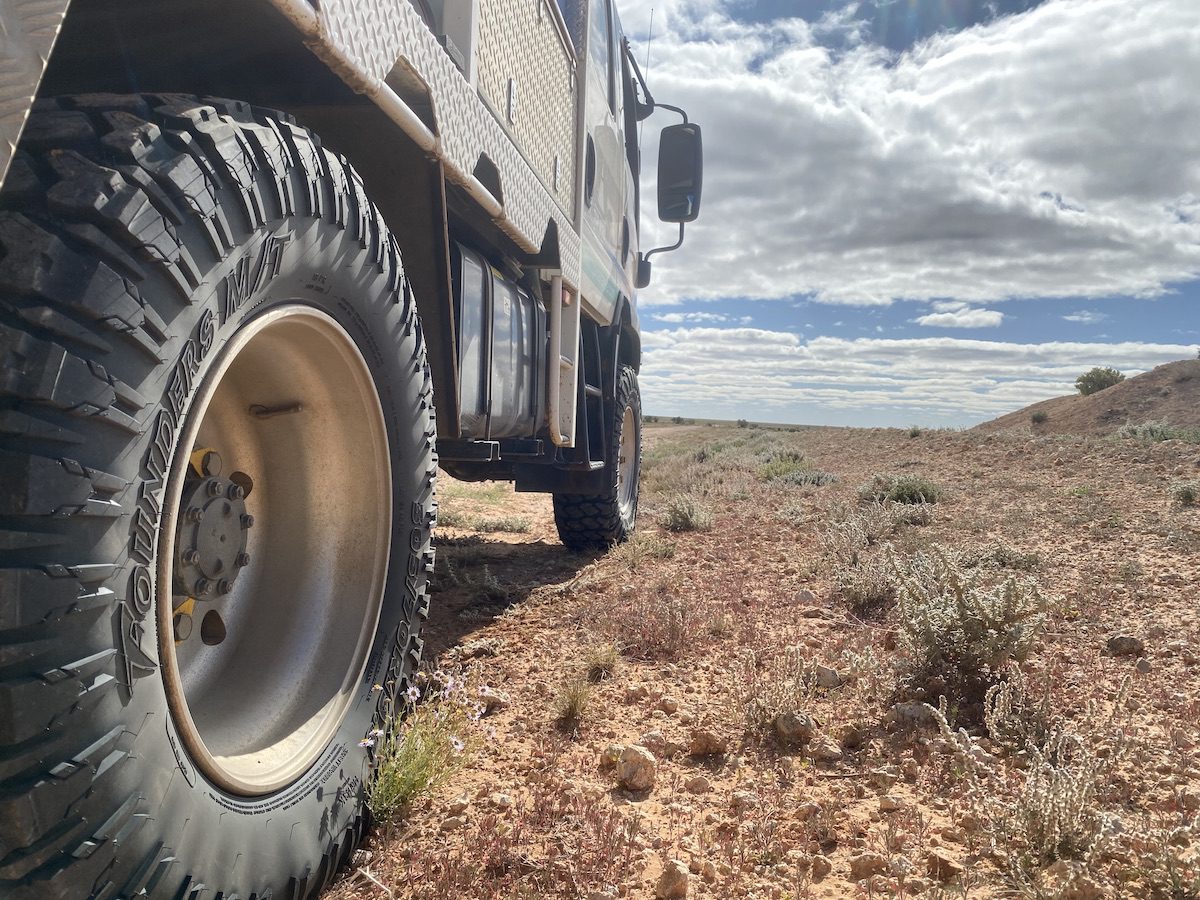 In the initial review of our Founders M/T 305/70R19.5 tyres, we explained how All Terrain Warriors gave us a set to trial. At the time, I wasn’t keen on going from all-terrains to mud tyres.

Why? Because they’re usually noisy, wear quickly and have a more aggressive tread pattern than we need. However with all the rain about, the muddies have been most welcome…

Plenty of Dirt and Mud

But endless rain fronts have seen us ducking and weaving, avoiding road closures.

Road conditions have varied widely. The tar roads are in poor condition, with the sodden ground causing the tar to break up and form giant potholes and broken edges.

The softer ride of the Founders tyres has been most welcome. With the firmer Toyo Tyres, we would have been pounded to pieces. Thankfully, the Founders are more forgiving and offer a much softer ride.

In summary, the harshness has gone. It’s still not a limousine ride, but way better than it was with the Toyo tyres.

On dirt, we’ve covered just about every possible scenario:

In the slippery stuff, these tyres are fantastic. By chance, we had the opportunity to really put them to the test…

We were part of a group who had to travel on a super-wet dirt road in Western NSW (we had official permission – it’s a long story!). Just a couple of hours after 50+mm had fallen, we had to drive nearly 100km on a very sloppy road.

Two other vehicles (4WDs towing campers) were with us, both with experienced dirt road drivers. They became bogged a total of four times. Yet with us loaded to over 6.5 tonnes and spread over just four wheels, we sailed through everything.

The Founders tyres simply bite in and grip like crazy.

To give you an indication of the conditions, we wouldn’t have had a chance of making it through with the Toyo all-terrains. And that’s saying something, because they were seriously capable tyres.

A few times, we had to get off the road and onto higher ground for two hundred metres or more at a time. We were churning over saltbush and mulga sticks, with a heavy right foot to keep momentum going in the soft stuff.

Those of you familiar with saltbush and mulga will know how brutal it can be on tyres, especially sidewalls. Yet we came through with not a single nick or scratch on the tyres.

Impressive to say the least.

The open tread pattern means they self-clean almost instantly. This is a feature you’d expect with a mud tyre. It’s reassuring to know that the grippy tread is available when you most need it, rather than it becoming a glorified “slick” in the mud.

Our Toyo 19.5 inch tyres had strange wear patterns. It was something we never solved, despite trying different tyre rotation patterns, playing with tyre pressures, and speaking to Toyo Tyres about the issues.

Despite this, they were brilliant tyres. Zero issues with flat tyres or blowouts in nearly 185,000km of often-brutal conditions.

Just before All Terrain Warriors fitted our new Founders tyres, the truck had a wheel alignment. So these new tyres are starting with a clean sheet.

It’s only early days, but the front tyres appear to be wearing evenly. The rears are wearing more on the outside than the middle, suggesting our pressures are a bit low. However, we had an identical issue with the Toyo tyres… increasing tyre pressures made no difference.

We’ll run the rear tyres slightly higher for 10,000km and see what happens.

The rears are showing the first signs of feathering on the outside lugs. This is something we’ve come to expect on our Isuzu NPS truck. So it seems this issue will continue with the Founders tyres.

What’s surprising is the general lack of lug damage, particularly on the rear tyres. After running over stony roads, the Toyos would have lots of nicks and cuts in the lugs. However, the Founders tyres came through virtually unscathed.

There’s a handful of small nicks, but that’s it. This surprises me greatly. Being a softer compound, I expected the Founders would get ripped up pretty badly. Fortunately, that’s not the case… not at all.

Full marks to Founders for getting the compound spot-on for Australian conditions.

What Tyre Pressures Are You Running?

Those of you with a keen eye will notice we’ve dropped 5psi from the front tyres on tar (80 to 75psi). We’re looking to get an even smoother ride without compromising tyre wear.

We could drop the fronts to 40psi on dirt. But since the ride is so much better now, it’s not really necessary.

This is probably not a very useful indicator though.

Based on previous experience, the rears will wear the outside lugs more quickly than the centre rows of lugs. So the outside edges will most likely hit minimum legal tread depth way before the centre of the tyres.

In fact, we’re seeing the first signs of this happening already on the rear tyres.

The first isn’t really an issue, more a comment. Founders run the tread pattern quite a way down the sidewall of the tyres. This means they throw up a lot more mud and dust onto the sides of our truck than we’re used to.

It’s especially noticeable in the mud, where the top of our slide-on camper now gets a coating of mud. We even had one of the front tyres throw a stone up onto the roof of our cab while driving on tar. That’s something we hadn’t experienced before.

When we first drove the truck on dirt, we noticed how many more stones the aggressive tread pattern threw up. I was thinking we might have to add more protection to items like fuel filters and fuel tanks. However, this has proven not to be an issue.

One slightly annoying thing… we have less clearance under the front guards compared to the Toyo tyres.

Founders’ slightly higher tyre profile (305/70 vs 285/70) means we have to be careful when turning sharply over gutters and banks. The tyres rub on the mudguard under certain conditions.

In fairness, we haven’t fitted longer spring hangers to the front parabolic springs. To explain – when we changed over to King Shocks, they supplied a set of longer front spring hangers to provide more front travel. But we haven’t had a chance to fit them yet. This should solve the issue.

Speaking of King Shocks, the combination of King Shocks and softer Founders tyres is almost perfect. The tyres are bouncier than the Toyo tyres at speed. The King Shocks allow the first bounce so the tyres take the initial shock, then suppress it straight away.

We’ve only had these Founders 19.5 inch tyres for 10,000km. But even now, it would be difficult to go back to a harsher-riding tyre like the Toyo tyres.

The ride is light years ahead of what we had come to expect was “normal”. And so far, it looks like the Founders are as puncture-resistant as the Toyo tyres were. I certainly hope this continues!

As we move into the summer months, it’ll be interesting to see how well the Founders tyres handle the heat. We’ll be caretaking out near Cameron Corner (in Sturt National Park, Western NSW) again in January. It’ll be an ideal test of how well they cope with extreme heat.

I’ll try to rotate all six tyres (two spares) every 10,000km. This way, we’ll have the best chance of maximising tyre life.

How long will they last? That’s an unknown quantity at present. We’ll wait and see. But so far, our Founders 19.5 inch tyres have done everything we’ve asked of them and more.

Thanks to Chris and Nick Campbell from All Terrain Warriors for their generous offer to supply this set of tyres for us to trial… and for organising fitment, despite the pressure and uncertainty of unreliable supply chains.

Note: ATW have supplied these tyres at no charge to us. However, all our reviews are open and honest – we tell it how it is.