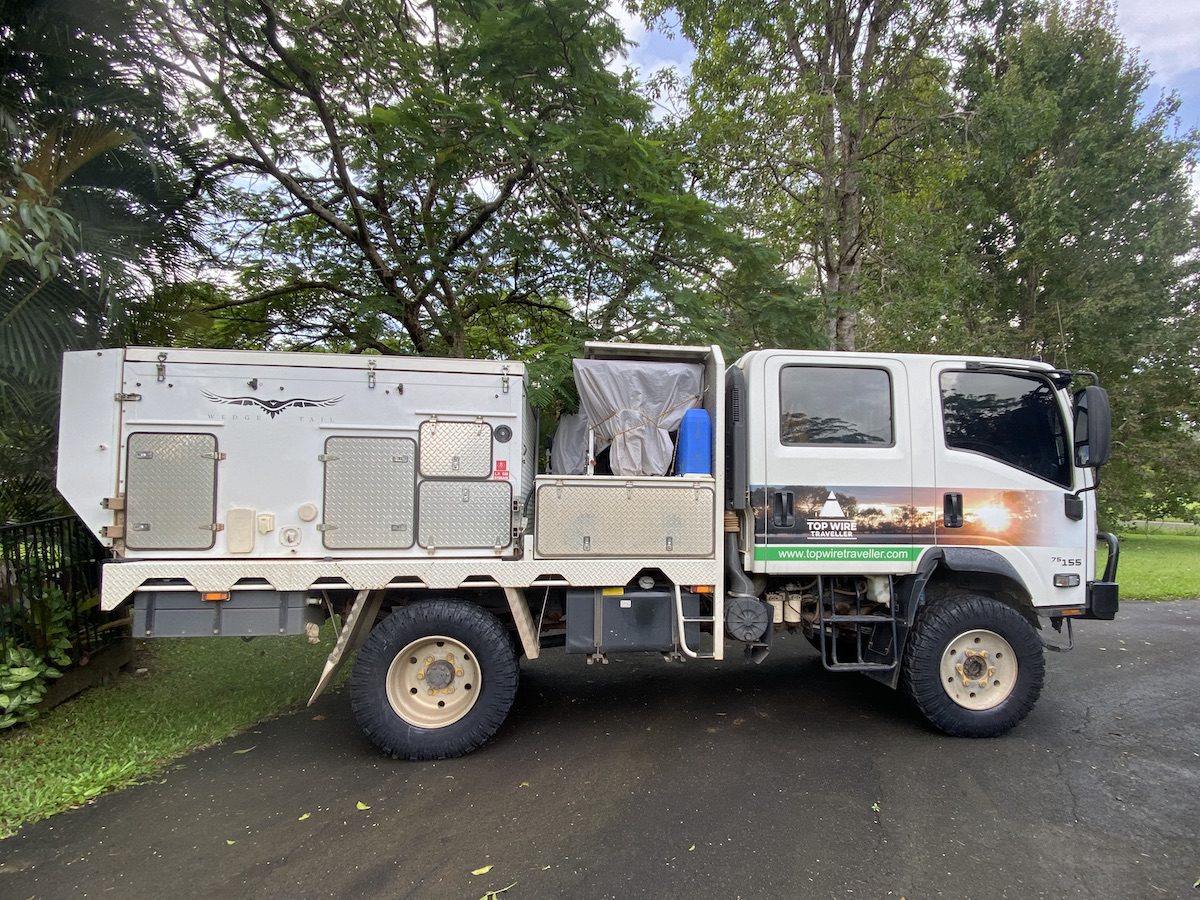 After much searching, we’ve finally found a replacement for our Toyo tyres. We’re trialling a set of Founders 305/70R19.5 mud tyres, supplied by All Terrain Warriors.

Unfortunately, Toyo blindsided the local market. With US sanctions on a whole swathe of Chinese goods, Toyo redirected their truck tyres from the Australian market into the US market. Who’d have thought US sanctions on China would ripple down to the availability of tyres!

The problem is, the first many local distributors heard of this decision was when their promised shipments didn’t arrive.

To be fair, Toyo aren’t alone. Other Japanese tyre manufacturers have done exactly the same thing. Why bother with the tiny Australian market when they can sell as many tyres as they can manufacture to the US.

The Toyos really were bulletproof. We used them for 185,000km and nearly 6 years… without a single puncture, let alone a blowout.

That reliability is priceless when you’re travelling remote and running relatively heavy in ridiculously hot weather. We lost count of the number of people we met with light trucks and heavy loads that were having major issues with 35s and 37s… blowouts, bubbles, ripped sidewalls, rocks punching straight through the tread.

So it’s difficult to forgo such a reliable tyre. But it’s a reality, so we searched around for a suitable replacement.

There are a few other possibilities, but not many. They’re mainly on-road tyres, so are unsuitable for our needs. We were looking for an all-terrain tyre, something that would perform well on the dirt and be acceptable on tar.

Here’s our shortlist of off-road tyres. It’s not a complete list of 19.5” tyres that are available in Australia… it’s just our shortlist. Be aware, they may well be out of stock in Australia at present:

These are made in China, cost around $400ea and have an all-terrain tread pattern. They’re also marketed as Westlake tyres in Australia.

All Terrain Warriors have been supplying Goodrides for several years now. They’ve proven to have a good compromise between price and tyre life.

These are made in Korea, cost around $750ea and have an all-terrain tread pattern. Being 305, they have a slightly larger rolling diameter. I don’t know of anyone who’s running these, so can’t comment on tyre life.

These are made in Thailand, cost around $800 + GST and have a mud-terrain tread pattern. They haven’t yet covered enough kilometres in Australia to comment on reliability or tyre life.

As you’ll have guessed by now, we chose the Founders.

We settled on the Founders after All Terrain Warriors offered to supply a set for us to trial. Why did they do this? Well, our type of travel is an ideal test bed for these tyres:

•  We travel full time in the truck, so will quickly get an indication of wear patterns and tyre life.

•  We travel on a typical mix of dirt and tar. Many of the dirt roads are rough, corrugated, and rocky… an ideal test bed.

•  We often travel in hot conditions, with temperatures well over 40°C.

I’ve never been a big fan of mud tyres. They’re often noisy, tend to wear quickly, and 99% of the time the aggressive tread pattern is overkill. I’ve always run all-terrains on every 4WD we’ve owned.

A couple of other things to be aware of. Coincidentally the truck had just had a wheel alignment, which will hopefully help with scalloping of the front tyres.

The other point? About 9 months ago, we changed the shocks to King Shocks with remote reservoirs. This alone meant a massive improvement in ride quality. These two factors give the new Founders tyres the best shot at showing their true colours.

Over the last six years, we’ve tweaked the Toyo tyre pressures for a compromise between ride quality and tyre wear. Since the Founders are taller and softer tyre, we’ll do the same with the Founders. But where to start… what’s a good pressure to start at?

After speaking to Nick Campbell at All Terrain Warriors, we’re running similar tyre pressures as the Toyos. Remember, the truck is always loaded, with around 2,800kg on the front axle and 3,800kg on the rear. Here’s the comparison:

These figures are a good compromise between tyre wear and ride. On both dirt and tar, we couldn’t go any higher on the front. If we did, the ride was too rough.

These pressures are just starting points for now. We’ll fine-tune them as we cover more kilometres.

One other minor, yet important point. Being a 305, the Founders have a slightly larger rolling diameter than the 285 Toyo tyres. They’re marketed in the US as a 36”, whereas the Toyo tyres were equivalent to 35”.

So the speedo is slightly out. Here’s the difference:

This raises an interesting point. How does this affect braking – is your truck still compliant?

It depends on the make and model. Our 2016 Isuzu NPS 75-155 complies because All Terrain Warriors have done the brake testing for this model. Before you buy a set of these slightly larger tyres, check with the truck manufacturer first.

With these trucks limited to 100km/h in certain Australian states, keep a close eye on your speedo. Highway patrols love speeding trucks…

Here are a few more specs in case you’re after all the details:

Firematic’s website in the USA has a few more details. These tyres were designed for the fire and emergency vehicle market in the US, so you’d expect them to be durable. In Australia, All Terrain Warriors are the exclusive dealers.

Take note of the Speed Index. Being a mud tyre, the Founders 305/70R19.5 tyres are limited to 110km/h. For those of you in Australian states where the 100km/h speed limit doesn’t apply to your light truck, you might want to back off a bit.

So with just a couple of thousand kilometres under our belt, what are our initial thoughts?

So far, we’ve travelled west from south-east Queensland on Queensland’s notorious regional roads. Then we drove down regional tarred roads to Wollongong.

Broken edges, bone-jarring joints between the patched-up sections, potholes, and sections where you’d be forgiven for thinking you’d wandered onto a Winter Olympics mogul ski run.

No doubt, Queensland still hold the dubious title of the worst regional roads in Australia… although most of the other states are unfortunately pushing hard for the crown.

And we did a short run on a couple of dirt roads. Unfortunately, nearly all dirt roads were closed due to heavy rain. One section was pretty rough. We ran tar tyre pressures.

The result? The Founders tyres give a much smoother ride than the Toyos. Even on the ridiculously bad tar roads, the harshness is pretty much gone.

And on the dirt roads, we would have been shaken to pieces with the Toyos at tar road pressures. Yes, the Founders could have done with a bit less air. But the ride was still acceptable.

On the dirt, we even had one unexpected encounter with a patch of deep, wet clay. I was onto and into it before I had a chance to even think about locking the front hubs. The rear tyres grabbed, dug in and pushed us through no worries at all.

The sticky mud cleared quickly from between the lugs, as expected. And the aggressive tyre pattern extends quite a distance down the sidewalls. It helps to protect and strengthen the sidewalls to some extent, and adds to the overall grip of the tyre.

The wide gap between the lugs does have one downside though. Not surprisingly, it allows the tyres to pick up bigger stones than with the Toyos. So we might need to look more closely at better protecting a few items (like fuel filters) behind the front wheels.

The Founders seem to bag out more readily than the Toyo tyres. So we assume the sidewall is softer… even though the ply rating is slightly higher.

Whether this translates to more sidewall damage, we’re yet to find out. But it certainly does translate to a softer ride.

A Thumbs Up… So Far

We’re super-keen to see how these tyres perform. I do wonder how long they’ll last though, as the compound seems extremely soft. But we know they’re a mud tyre… and we know mud tyres wear quickly.

The best summary? After just a few kilometres, we both agreed it would be difficult going back to the rougher ride of the Toyos. This should give you a feel for how much better the ride is with the Founders.

But the real test will be how reliable the Founders prove to be. If they match the reliability of the Toyo tyres, then I’ll be prepared to put up with a shorter tyre life and their higher price tag.

These tyres were made for the US market, specifically fire and emergency vehicles. But US tyres tend to run softer compounds which often don’t survive in Australia’s brutal conditions. I do wonder how they’ll hold up.

We look forward to giving these tyres a proper workout. We’ll let you know how they fare.

Thanks to Chris and Nick Campbell from All Terrain Warriors for their generous offer to supply this set of tyres for us to trial… and for organising fitment, despite the pressure and uncertainty of unreliable supply chains.

Note: ATW have supplied these tyres at no charge to us. However, all our reviews are open and honest – we tell it how it is.