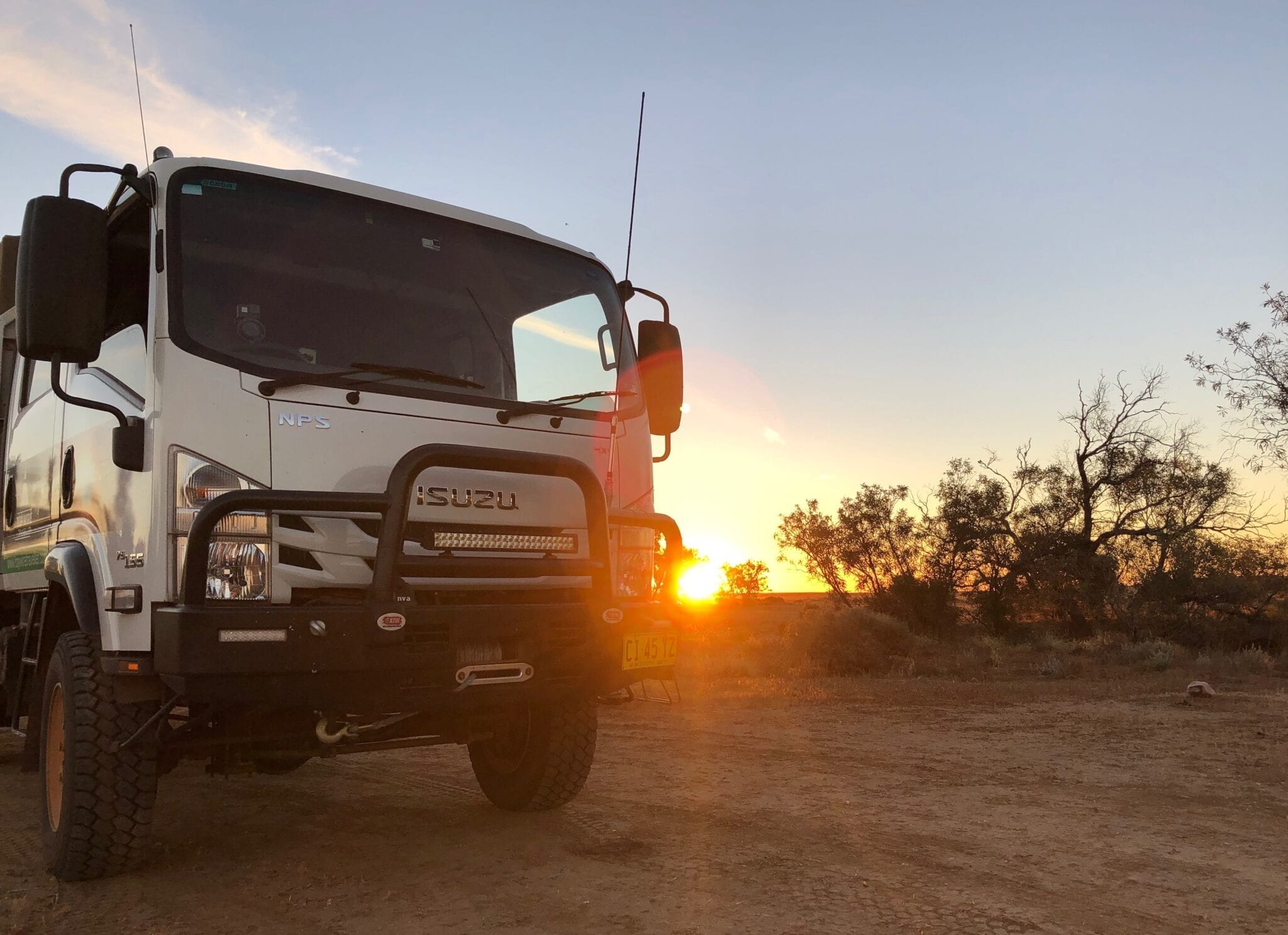 We’ve been living full-time in our Isuzu NPS 4×4 truck and Wedgetail Camper for 18 months now.

And if you still have a question after you read through this, please contact us here. We’re more than happy to help out.

“Where Has The Truck Been In The Last Year?”

Where do I start! We’ve covered about 40,000km in the last year. And plenty of this has been on rough, corrugated roads. Places like:

… just to name a few. So we’ve covered some ground!

Just one small item. A whaletail latch on one of the storage boxes fell apart after one too many corrugations. This was a simple replacement.

“Any Repairs Or Replacements?”

There’s been couple of things outside of normal servicing.

The exhaust brake basically wore out at 105,000km. The internal diaphragm failed and the actuator shaft was badly worn.

The butterfly valve was fine, no wear at all. I think we accelerated the wear in the actuator with the continual corrugations and fine red dirt.

Replacing the actuator/butterfly valve assembly was an “interesting” exercise. All the bolts on the exhaust pipe flanges are tack welded in place. So I had to loosen everything back past the DPD and jiggle it around to get the old butterfly out and the new one in.

Not an easy job in a caravan park!

Wind Noise From The Front Doors

A common complaint from Isuzu NPS 4×4 owners is the wind noise from the tops of the front doors. Australian Design Rules dictate that mirrors must be attached to the doors, rather than Isuzu’s original design of attaching them to the body.

These big mirrors flex the tops of the doors at speed and you getting a horrible drumming noise, especially in a crosswind.

Unfortunately, you can’t adjust the doors in with the standard hinge bolts. They have a round shoulder which locate size-for-size into the holes in the hinge brackets.

The fix is simple. Isuzu are aware of the issue and simply replace the bolts with shoulderless bolts. Then the doors can be adjusted. Problem solved!

The base of our GME UHF antenna worked loose due to corrugations, just above the spring. This was a simple fix with a dab of Loctite.

We weren’t sure how long the new whip would last, as it oscillates like crazy when we’re going over corrugations. So far so good though.

Beware Of The Fuel Filter Housing!

The final filter (on the side of the motor) has a plastic housing. We had an issue after a service, where the truck was sucking air into the fuel system.

It turns out the mechanic had simply over-tightened the plastic final filter bowl and warped it. Apparently this is really easy (way too easy) to do. The bowl just has to be lightly nipped up by hand. Any more and it will likely warp or crack.

It’s a shame Isuzu don’t use a metal bowl.

We’re running pretty heavy, at just over 6.5 tonnes all up with 3.8 tonnes over the rear axle. So the rear helper springs are in service pretty much continually. After copping a pounding, they’re due to be replaced.

And yes, they were worse than I first thought. The two rearmost ones were in the worst shape. We’ll have to replace these more often, now I’m aware of it.

We replaced four of the six tyres last year. They lasted 70,000km and were looking a bit dodgy, considering rego was due.

Considering the absolute flogging these tyres cop, I’m not too concerned with the low mileage. They are Toyo Hyparadial M608Z tyres and haven’t even looked like letting us down yet.

We’ve done our best to spear razor-sharp rocks into the tread and cut the sidewalls with rocks and unbreakable mulga. But they’ve withstood horrendous punishment.

But we’re now running at 55psi (rear) and 45psi (front). Why? The lower pressures make a massive difference to the ride when off-road. Plus the tyres don’t seem to get any hotter. Although this is hardly surprising, since we never go over 80km/h on dirt roads anyway.

Yes, these tyres are expensive. But so are new shocks or springs… or whatever else we might break, if we ran at higher pressures. So in some ways, we’ve decided the tyres are the sacrificial part.

If they keep performing like they have been for the past 3 years, we’re more than happy to keep replacing them.

Since the Year Two Review of our Isuzu NPS, we’ve really only added one thing. We’ve been too busy travelling and working!

All Terrain Warriors fitted 2 x 40 litre water tanks fitted behind the rear wheels, one set on each side. This gives us an extra 160 litres on board.

The tanks are dead simple, with no pumps or electrical components to fail. We just decant from a ball valve at the bottom of each set of tanks into a small jerry can. Then we simply pour it into the Wedgetail Camper water tank.

Since then, the reversing camera and TPMS have dropped off the list. They’re in the “nice to have” category now.

The one standout though is still the passengers seat. We saw a Hino light 4×4 dual cab truck with a neat solution. They had a sub-frame which slid forward and hinged up. Then a suspension seat was mounted on the sub-frame.

So they could still access the engine via the engine hatch under the seat. This mod had been certified from new.

That idea has me thinking of a few options for the NPS dual cab. One day I’ll play around with it a bit more…

This isn’t a problem, more an interesting observation. The blokes at Dwyers Truck Centre in Wollongong/Nowra told me about injector cleaner. Now I’d always though injector cleaner was akin to snake oil… just another way to spend money on something useless.

But I was proven wrong.

We’ve started using it and fuel economy has improved noticeably. We were sitting at 19 – 21 L/100km before we started using injector cleaner. Now we’re consistently at 18.5 -19L/100km.

Now you could put this down to the truck loosening up over time. Except…

A few months ago we filled one of our two tanks (they’re separate tanks with a switching valve) with some dodgy fuel in outback Queensland. The fuel out that way can be waxy and has a reputation for clogging fuel systems.

Anyway when I switched to that tank, our fuel economy immediately went from 18.5L/100km to 25L/100km! And the truck was noticeably down on power.

The other tank (filled elsewhere) returned 22L/100km and the truck was still struggling.

So I filled both tanks and dumped some injector cleaner in. Economy from those tanks went straight back down to (average) 18.7L/100km and the truck was running normally.

Same road conditions, same weather, same road speeds. That convinced me that Isuzu’s injector cleaner was worth the money.

And in the grand scheme of things, it only costs about $25 per bottle every 7,500km. Food for thought…

Note: We’re not affiliated with Dwyers Truck Centre or Isuzu Trucks in any way. This is simply an honest observation of our experiences with Isuzu injector cleaner.

“Would You Still Buy Another One?”

Definitely. An Isuzu NPS 4×4 truck is a great tour vehicle. We still love the space and the view from the cab. And it’s incredibly capable off-road.

Over the last 18 months, we’ve proven how tough these trucks are. They’re simple, easy to work on and above all, reliable.

We wouldn’t hesitate to buy another one!