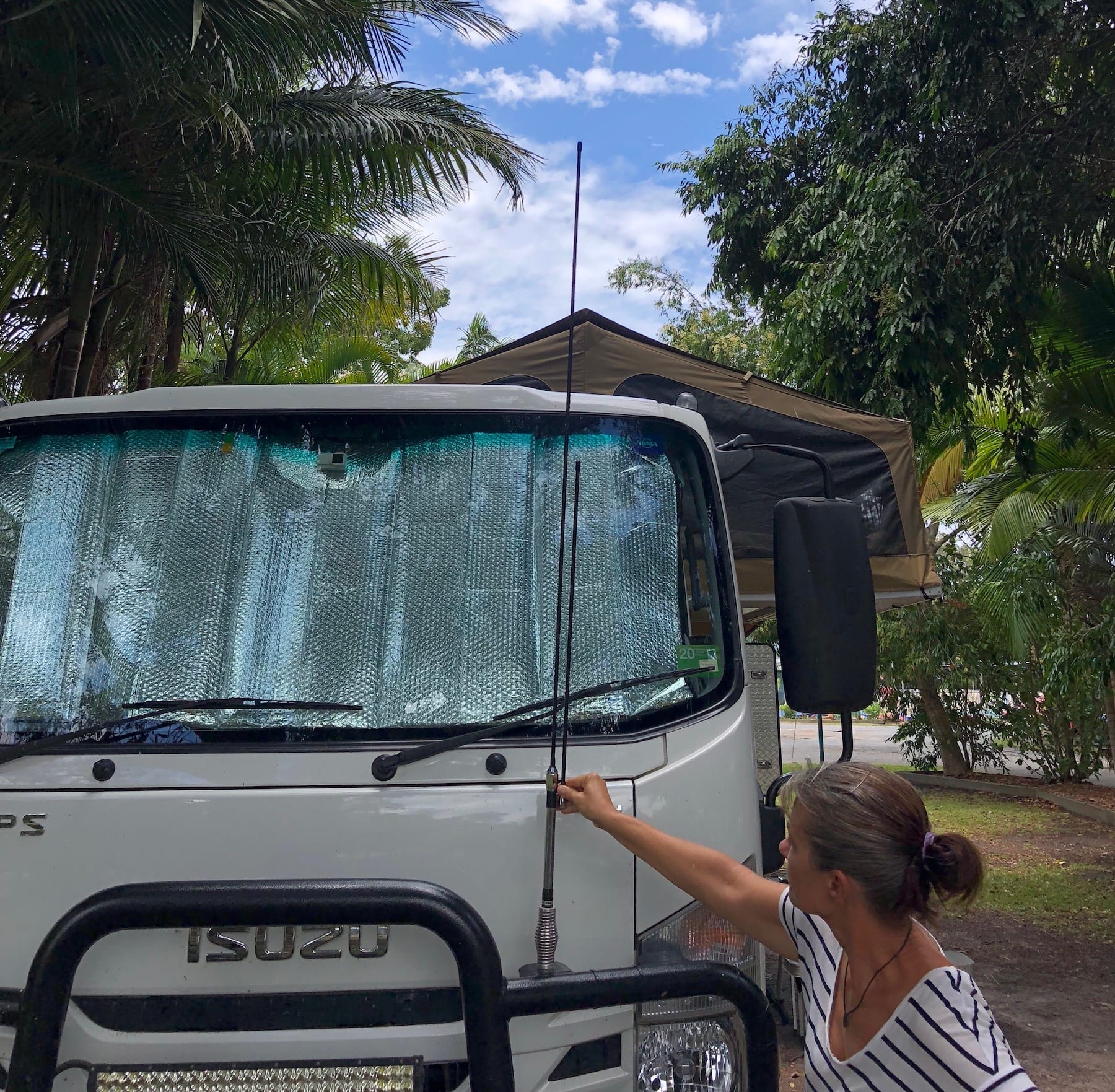 How The Right GME UHF Antenna Solved Our Reception Issues

When our truck was new, we installed an old GME UHF from our previous 4WD. It’s a TX3400 and still has some life in it yet. But we needed a new aerial.

So I bought a GME AE4018K3. It has a heavy duty stainless steel spring, an elevated feed, a 4.5 metre cable and a 640mm long black whip. What’s an elevated feed? It’s the shiny round bit between the spring and the whip. In other words, an extension piece.

Now, where to install it? I didn’t want anything on top of the cab or the headboard of the tray. Our truck’s already tall enough without adding aerials.

So we mounted it on the bullbar. Being a cabover, we had reservations about how much the cab would interfere with reception. As it turns our, our reservations were justified.

So this is what we found. Reception forward of our truck was exceptional, way better than expected. And hilly or flat country… it really didn’t matter. But anything beside or behind us was lost in a blur of static.

If a vehicle was right behind us, we could speak to them. But if they backed off a couple of hundred metres, we couldn’t. Something had to be done about this.

I admitted defeat and decided to re-position the existing UHF antenna onto the headboard of the tray. After all, I had mounted a stubby aerial on there already. It’s the one we need for our Cel-Fi GO mobile phone booster. This had already been moved from the bullbar due to it interfering with the Cel-Fi Go’s internal antenna.

One (not so) small problem. The aerial’s coaxial cable wasn’t nearly long enough.

Of course, we could have bought something suitable to mount on the cab roof or the door mirrors. But again, I didn’t want an aerial sitting where a tree branch could snap it off and possibly damage the roof or mirror bracket.

Next solution? Change the whip.

I spoke to Damien Hammet at ARB Wollongong about changing the whip. He said the best option at the start would have been one of those heavy duty UHF antennas, like this one. They are high gain antennas, plus they’re more durable than the whip antennas.

So Damien loaned us one to try out. With the aerials swapped, he kindly stood out the front of ARB with a handheld UHF while we drove away into the distance.

The difference was immediately obvious. We could send and receive clearly, without static. We even drove behind a building with the truck facing away from Damien. Both sending and receiving were still perfectly clear.

Thanks to Damien for going above and beyond.

Note: We have no affiliation with ARB Wollongong or ARB in general. We’re simply pointing out the excellent customer service from Damien at ARB Wollongong.

A whip antenna uses pretty well all its length to send/receive. With the 640mm long aerial, the entire antenna was sitting well below the cab. And being a cabover truck, it was close to the cab. So the cab was blocking the signal. No surprises there.

So we were dubious whether the longer AE4006 would make that much of a difference. After all, there’s only about 350mm of clear aerial height above the cab with this option.

However it works. We’re really not sure why it works as well as it does. Ahh, the mysteries of antennas… it really is a black art sometimes.

It probably shouldn’t work as well as it does, but we’re not complaining! We have no problem hearing vehicles well behind us, in flat or hilly country. And reception in front of us has improved as well. Sometimes it feels like we can hear every piece of UHF chatter in Australia!

Only one. It’s an expert at belly dancing… it gets a furious sideways oscillation about halfway down on rougher roads. This can’t be good for it. Sooner or later it will probably fail internally. And I should point out, Damien at ARB Wollongong was concerned about this. It was us who made the decision to go with it regardless.

When that happens, we’ll get a heavy-duty GME UHF aerial to replace it. Or maybe just buy another whip. They’re pretty cheap.

What had been a really annoying issue turned out to have a simple fix. Can’t believe we put up with it for so long!

Note: We are not affiliated with ARB or GME in any way.