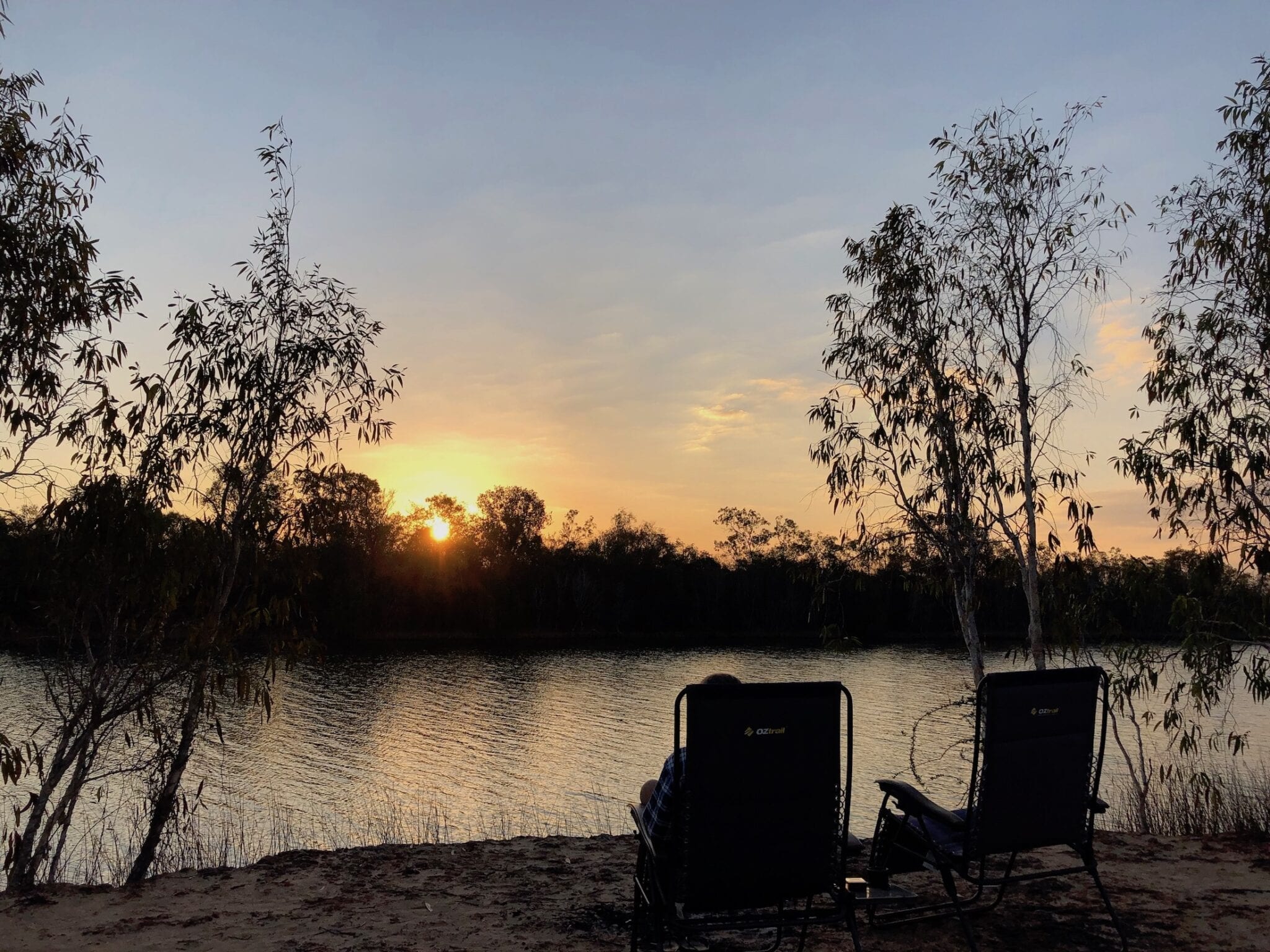 We took an alternate route of the Savannah Way east from the Stuart Highway just south of Mataranka through Roper Bar, then onto Borroloola. This route crosses some amazing terrain “across the top”.

It once had a well-deserved reputation as the Wild West. And it’s easy to see why…

A Name Without a Town

The traffic all but disappears once you’re off the Stuart Highway just south of Mataranka. The Roper Highway cuts a single lane ribbon of tar through savannah country… low trees, quite thick undergrowth and plenty of pandanus palm-lined creeks.

At first you skirt around the bottom of Elsey National Park. Then you start to see hills and escarpments. We were surprised how hilly this section is. I guess we were expecting flat savannah country, but we were wrong.

Some of the views across the the plains country are breathtaking, as you climb the hills and ranges. Keep your eyes on the road though. There’s plenty of blind crests and corners on this single lane tar road. You’ll inevitably encounter a car or road train when you least expect it.

The tar ends about 50km west of Roper Bar and it’s time to deflate the tyres. This road isn’t too bad. Just the usual corrugations and some rocky parts.

Pretty soon you’re rolling into Roper Bar. We christened it the Name Without A Town, as it appears to be all but deserted. The store/service station/mechanics workshop is closed with a For Sale sign hanging on the fence. Unfortunately, the campground is also closed… overgrown and deserted.

You can camp at the Bar, which is a crossing over the Roper River into eastern Arnhem Land. You need to a permit to travel any further.

We had lunch at the boat ramp and tried our luck crocodile spotting. No luck this time, but the river itself is delightful. Palms line this pristine river and we could see the Bar just upstream.

After Roper Bar, the scenery continues to spoil you. As you drive across the plains, beautiful escarpments can be seen all around. The road was in quite good condition, the only watchout being large bulldust holes.

After a while you’re into Limmen National Park. You’ll cross many creeks and rivers. We were there in late June, after a particularly dry wet season. So unfortunately most of the creeks were dry.

Any creeks or rivers that did have water were just puddles or a really low flow, so none of the crossings were challenging. However, some would be quite deep after a good wet season. Most have fairly steep entries and exits, so you’d have to be careful.

Limmen National Park has plenty of campsites along the road, all with toilets. The first one we encountered was Tomato Island. We were surprised to see it was more a full-blown caravan park than a National Parks campground.

It looked like a good spot, with access to the Roper River and some grass to camp on.

Next stop was the awkwardly named Lomarieun Lagoon… try saying that 5 times quickly!

We could well imagine it was most likely teeming with saltwater crocodiles though.

It looks so serene but there’s danger lurking just below the surface. Don’t be complacent in places like this. Keep away from the edge and just assume you’re being eyed off as a potential dinner.

Also at Lomarieun, but confusingly named St Vidgeons is the ruin of a precast concrete house, built in the 1960s. If you’re a loner, then this would be the place for you! It’s a long way from anywhere.

Our overnight camp was at Towns River campground. You pay a nominal fee and it has drop toilets. We pulled up on the eastern bank of the river, with several other travellers.

Fortunately the bank is a couple of metres high, so you won’t get eaten. We had no sooner set up and sat down overlooking the river, than a saltwater crocodile surfaced a little way downstream. How exciting!

We love seeing these big fellas. They’re scary but fascinating.

Towns River is a popular spot for travellers and was quite busy by late afternoon. If you’re looking for solitude then Towns River’s probably not ideal. However it’s a beautiful spot, especially when the sun sets over the river. The water was glass smooth.

After Towns River and heading east (actually more south than east), the road deteriorated badly. Big bulldust holes, reefs of bone-jarring rock and huge corrugations kept me busy behind the wheel. We were following rocky ridges and crossed over lots of small creeks, so it was slow going.

It really didn’t improve until well after the Lorella Springs turnoff. In fact the worst part was after Lorella Springs when the road crossed over and wound past numerous escarpments. We had to crawl over some parts.

By the way, it was along here we saw a couple in their 70s riding push bikes! They didn’t look like they were enjoying themselves at all. They were one of four pairs of riders we saw along the way.

Even though I think they’re completely crazy, you do have to admire their spirit and determination.

Limmen Bight River crossing was a bright spot along this bone-jarring road. This has lots of water and palms. A welcome break from the rough road!

Butterfly Springs is worth the short drive in. Nestled under an escarpment, it was just a small pool. But in a wetter season this spot would be spectacular. A waterfall drops into the pool, which has a sandy “beach”. Butterfly Springs is the only crocodile-safe place to swim along the entire route.

Twenty minutes or so down the road is the Southern Lost City. Turn off the main road and follow the signs for a few kilometres. You can camp here as well.

Apparently a huge bed of sandstone was uplifted and bent. It cracked into large chunks which have been eroded over millions of years.

Now it’s a collection of enormous sandstone columns, leaning every which way. A walk leads you through the columns then up onto a ridge where you can see another formation in the distance to the south-west.

From the main road, you wouldn’t have a clue such a strange place existed. It’s certainly well hidden.

Heading south-east again and you’ll meet Ryan’s Bend Road after a while. The road finally improved and was pretty good all the way into Borroloola. Ryan’s Bend Road follows Batten Creek and the scenery is spectacular. You have red escarpments mixed in with the deep green palms along the creek.

We saw plenty of burning off along this road.

After a short run along Ryan’s Bend Road, you encounter the tarred Carpentaria Highway. This is the main Savannah Way route from Cape Crawford to Borroloola.

Follow the signs and before you know it, you’ll be in Borroloola on the McArthur River.

This is a neat and friendly town with all basic services. We spent a couple of nights in the caravan park, which was busy with travellers in all sorts of setups. Borroloola is a jumping off point to the fishing mecca of King Ash Bay.

For us though, Borroloola was a place we’ve been fascinated in since reading a book called “Singing Saltwater Country”. It’s about one ignorant whitefella’s journey of discovery of the song lines running through the Capentaria country and out to sea. It was great to finally see so many of the places he had written about.

If you’re looking for a better understanding of Aboriginal people’s unbreakable link to country and what it means to them, then I highly recommend this excellent book.

Not surprisingly fishers flock to the Savannah Way, especially the Roper Bar to Borroloola section. The road is atrocious in places, yet it’s part of the adventure.

The scenery is absolutely mind-blowing, with red escarpments and breakaway country dominating. Although there’s plenty of wide Savannah plains too. In a wetter season, the creeks and rivers would be stunning and some would be quite a challenge.

Would we do it again? Definitely! Next time, we’ll go to all the places we didn’t call into this time.

Mataranka to Roper Bar road is on Mangarayi, Ngalakan & Alawa Country. Roper Bar to Borroloola is on Mara & Binbinga Country.

For more articles on the Savannah Way, go here.

3 thoughts on “Into the Wild West – Mataranka to Borroloola, via Roper Bar”