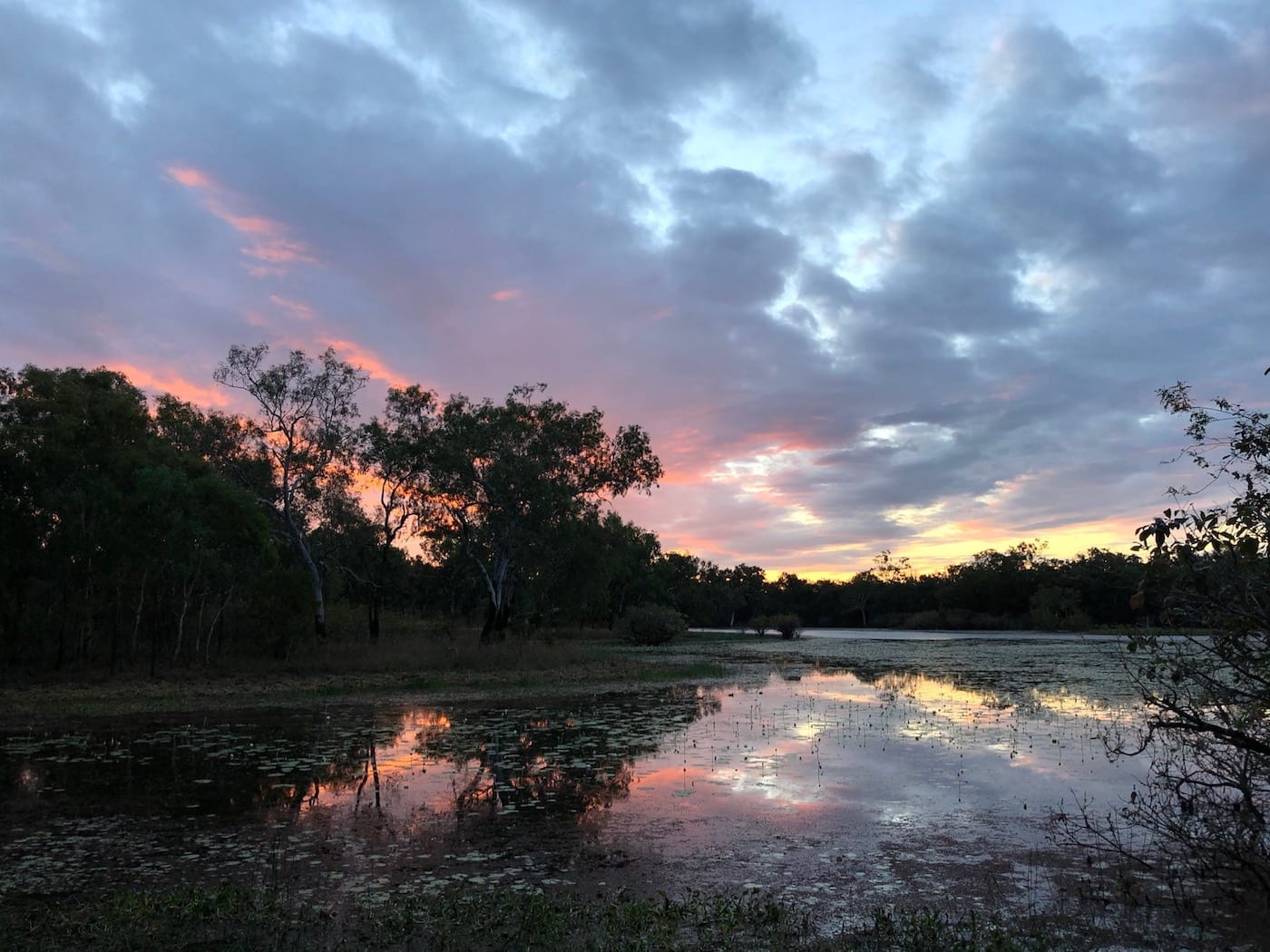 Horseshoe Lagoon – Serene By Day, A Killing Field By Night

Horseshoe Lagoon is deadly. Arrive during the day and your senses are assaulted with absolute beauty. Crystal clear water, fields of flowering lily pads, thousands of water birds feeding on the lagoon, and the occasional palm tree fringing the shoreline.

Just don’t try to swim there. You’re in the domain of the saltwater crocodile. They own this lagoon… as you’ll soon discover when night falls.

So where is this place?

Horseshoe Lagoon sits in Rinyirru (Lakefield) National Park, QLD. It lies between Laura and Cooktown. Laura is about 50km to the South-West, while Cooktown is a bit over 90km to the South-East along Battle Camp Road.

Battle Camp Road is like any other gravel road. It can be a great surface or it might be rough. By the time we arrived, Battle Camp Road had been pounded to pieces by thousands of 4WDs all madly rushing to and from Cape York. There were some deep holes and lots of corrugations. Take care.

From Battle Camp Road, follow a 2-wheeled track through the sand. This winds its way in through the scrub and is good fun. Some parts are fairly deep, so a 4WD is the vehicle of choice.

If you continue another 7km, you’ll reach Welcome Waterhole on the banks of the Normanby River. Both sites only have one campsite each, so make sure you book before arriving.

Having said this, Horseshoe Lagoon actually has three campsites. Maybe two of these have been created by travellers over the years, who knows. Regardless, there’s only one site available to book online.

You’ll need to be totally self-sufficient, including water. Trust me, you really don’t want to be collecting water from Horseshoe Lagoon. You might end up as hors d’oeuvres for a saltwater crocodile!

Horseshoe Lagoon is gradually revealed as you drive through the savannah scrub. Campsites sit near the edge of the lagoon. This is where you look around and simply say, “Wow”.

We chose a campsite near the water’s edge. Not too close mind you. We were back at least 10 metres from the edge to give ourselves a buffer between us and the saltwater crocodiles.

The lagoon is covered with thousands of flowering waterlilies. Waterbirds pick their way over the lilies with their oversized feet, dining on insects and water skimmers.

Birds of every description fill the sky above the lagoon, flying in large formations, banking this way and that as they search for a safe perch. Cute little kingfishers flit between the trees, adding their iridescent blue colouring to an already beautiful landscape.

Along the water’s edge, there’s clear signs of feral pigs. They’ve dug up around the edge of the lagoon and wallowed in the mud, leaving deep holes. Feral pigs cause plenty of damage to places like Horseshoe Lagoon, muddying the water and causing erosion.

As you’ll soon see, the country has created a clever way to cull these feral pigs.

Wild cattle also damage the shoreline, digging into the mud with their hard hooves, breaking up the surface.

Across Horseshoe Lagoon, patches of mangroves provide shelter for all sorts of animals and birds. Tall trees and the occasional palm tree thrive across the other side.

It’s one of those places that would be ideal for exploring with a kayak or canoe… except for those gigantic biting reptiles that would eat you pretty quickly!

Yes, There Really Are Salties In There!

Once night falls, this serene wonderland transforms into something quite different. We knew salties lived in the lagoon. Regardless, it was hard to imagine they were actually there because the place is so peaceful.

Suddenly our ten metre buffer zone off the water felt way too small…. and it probably was. At least we were up off the ground in our truck-based camper.

Just after dark, a series of sharp sounds echoed across the water from the far bank. When crocs snap their jaws shut, it sounds like two hollow coconut shells being smacked together. Sub-consciously, we moved our chairs closer to our camper.

We could almost imagine the crocs on the far bank preparing for night shift, snapping their jaws shut and sliding into the water.

We had noticed a few waterbird species had settled onto the water amongst the lilies for the night. This was perplexing… why don’t they get eaten by the salties? Well, by next morning we decided they probably do.

The occasional sound of a saltie’s jaws snapping shut during the evening, confirmed that some of those waterbirds are indeed on their menu.

Perhaps the most chilling sound was being woken twice during the night by the sound of pigs squealing frantically then… total silence. The Country has found a way to cull these feral creatures. What better way to keep the pig numbers down than to call in the perfect killing machines? I imagine a feral pig would be a decent feed for a saltwater crocodile.

Did That Really Happen?

First light once again revealed Horseshoe Lagoon in all its beauty. The birds were stirring, otherwise all was quite and still. And with the light, we again felt safe and secure. It was difficult to believe such a peaceful place can be so violent.

We’ve camped in crocodile country many times, heard them barking just offshore in the open ocean and seen what they are capable of up close. However, this was different.

We could actually hear them hunting… or at least, the final outcome after hours patiently stalking prey. I have to say, it’s a spine-chilling experience. Having said this, it’s an experience we’ll never forget and would do again in a heartbeat.

Horseshoe Lagoon is a perfect stopover. Just don’t be deceived by the peace and beauty of this place. Assume you’re being watched, whether you are or not. And maybe camp a bit further away from the water than we did…

Horseshoe Lagoon is on Kokowarra Country.