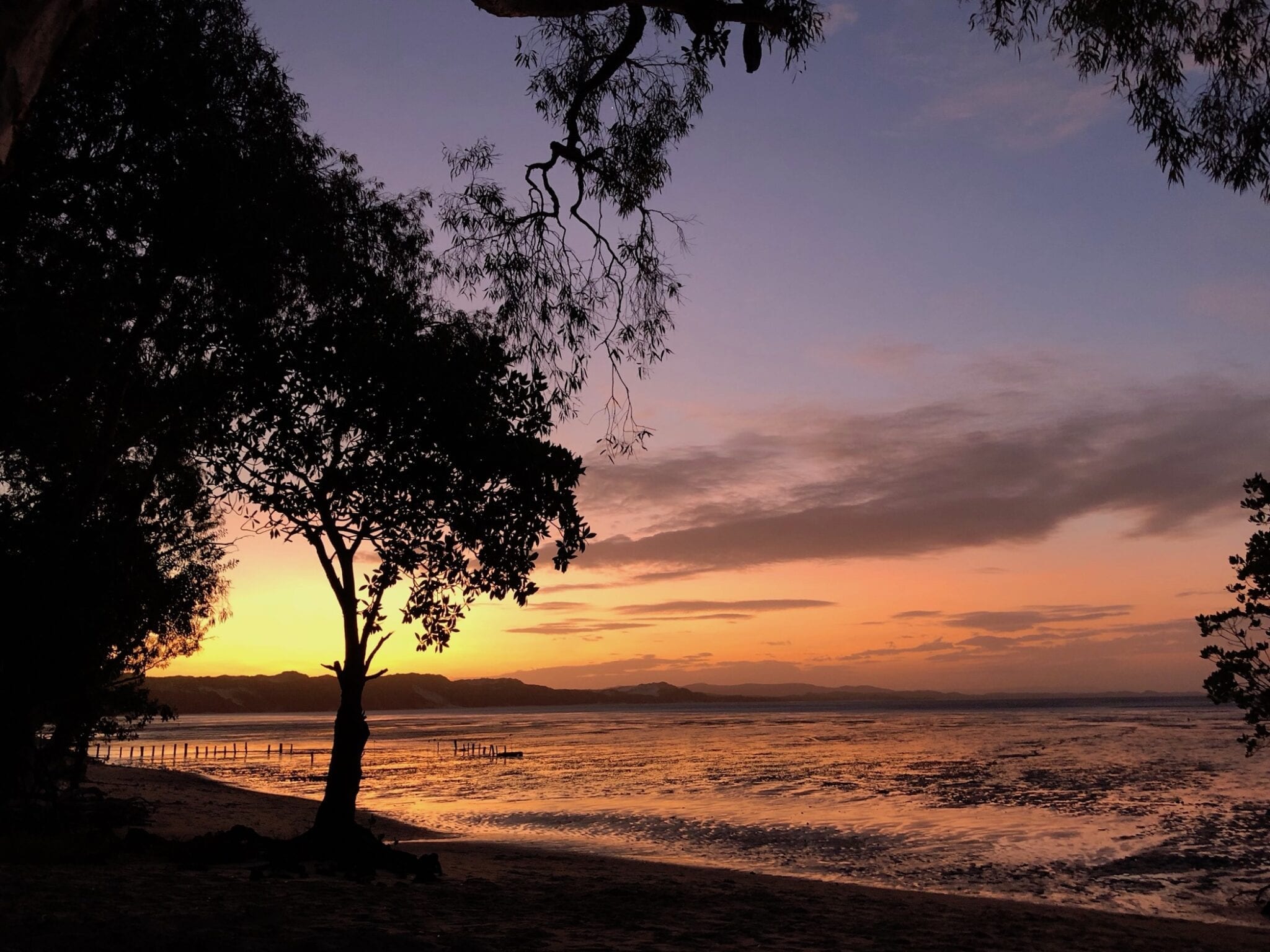 Imagine finding a spot in Tropical North Queensland (TNQ) where you can camp right on the beach. In fact, right on the edge of a huge bay with views of coloured sands in the distance. We discovered Eddies Camp and were blown away by its beauty.

Eddie Deemal is a Thiithaarr-warra Elder. He runs Eddies Camp with his son Ivan. He has been an outspoken advocate for his country, with a deep understanding of traditional practices and the challenges of modern development.

Eddie opened up this area so travellers could experience his amazingly beautiful backyard, and hopefully gain an appreciation for its traditional history.

Located about an hour North of Cooktown, you go through Hope Vale then continue North-East until you reach Eddies Camp. The road is tarred past Hope Vale, then becomes a fairly smooth dirt road.

A Maze Of Sand Dunes

Shortly after we hit the dirt, we came over a crest. In front of us lay a maze of tall sand dunes with pure white sand peeking out from the vegetation. It’s confusing to the senses. The sand is so white, it looks like snow… except we were in the tropics!

Fortunately the road has been formed up using gravel then compacted. Otherwise we’d have been ploughing through fine white sand, up and over sand dunes.

In typical TNQ fashion, the vegetation on these dunes isn’t simply scrubby coastal country. Sure there’s plenty of scrub. However, add a few palms and flowering tropical plants to the scrub and the result is a visual delight.

After making your way through the maze of sand dunes, you swing North and crest a rise. And what a view! In front of you is a postcard parorama of blue ocean and white sands.

Cape Bedford juts out Eastwards like a giant shoe. Elim Beach sits on the Northern side of Cape Bedford, protected from Easterly and Southerly winds by the elevated ridgeline along the cape.

Hmmm, Where To Camp?

Flushing toilets and cold showers are available. There’s also a basic camp kitchen. Beyond this, be self-sufficient. You can’t buy food here, however you can get water if need be.

The outstanding feature of this campground is the location.

We were lucky enough to score a spot right on the edge of the ocean. The weather had turned pretty cold, with a strong South-Easterly blowing. However we hardly noticed it. The wind passed right over the top of the trees.

By afternoon, Eddies Camp was filling quickly. Even so, you never feel crowded. We spent plenty of time sitting in our chairs, gazing across the clear blue water.

Time For A Walk

We had sat around for long enough. So it was time to stretch our legs. With some vague directions from the bloke at the office, we set off to see the coloured sands.

Following the beach Westwards, we soon encountered mangroves. Now after our experience the night before at Horseshoe Lagoon, our crocodile warning alarm was flashing red. After a few dead ends and some head scratching, we found a way around the mangroves and popped out at the coloured sands.

And what exactly are the coloured sands? Well, they’re a “wall” of reds, whites and all colours in between. A giant cliff face that appears to have been covered in white sand then has mixed with the red soil of the cliff over millions of years.

The coloured sands provide a spectacular backdrop to the white sands of the beach and the deep blue water of the bay. While it’s tempting to climb the slopes of sand and “surf” down, we didn’t. The whole cliff face looks really fragile, so we didn’t want to add to any damage already done.

You can actually drive along this beach at low tide in a 4WD, if you ask permission first. Be careful though. When the tide is high it virtually laps at the bottom of the cliff in places. Plus the destroyed Landcruiser resting on its roof is a reminder of what can go wrong…

We walked back along the road, admiring the tangle of pandanus palms back from the beach.

After a perfect tropical sunset, it was time for more gazing over the ocean then bed. We were woken late in the night by the sound of the high tide gently lapping the shoreline. It was a little disconcerting at first. It sounded like the water was right outside our camper.

We only spent one day and night at Eddies Camp. You could easily spend a few days chilling out here, unwinding and soaking in the perfect vista before you. A 4WD track to Cape Bedford will keep you busy for one day. Or you can just sit and watch the world go by.