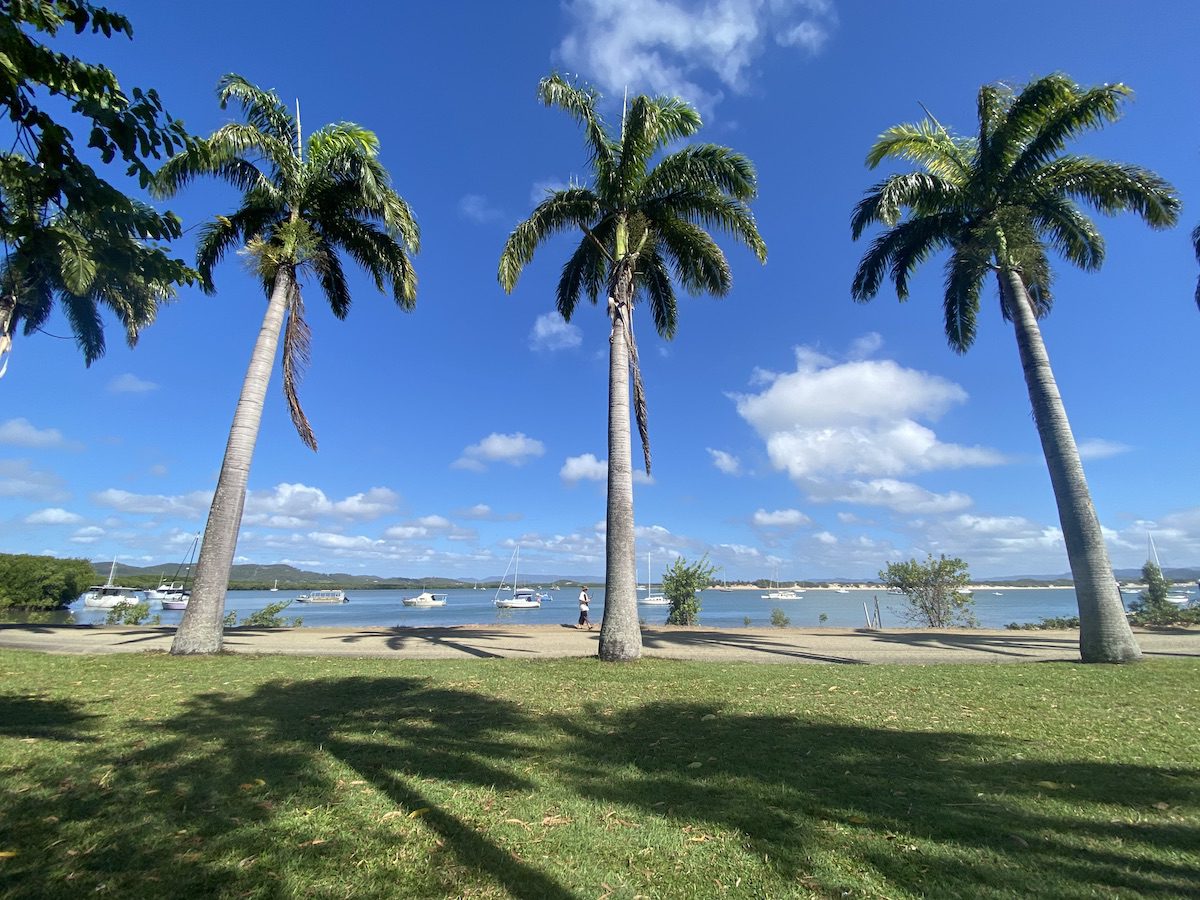 You might remember back to the days when we’d head to a sleepy coastal village for the summer holidays. Wide streets, friendly locals and a laid-back vibe. Those places are gone now… except for Cooktown.

About 325 further north from Cairns and about 250km north from Mareeba, this beautiful coastal town feels like it’s trapped in the 1970’s – in a good way!

The drive is to Cooktown is spectacular. To the east are rainforests and steep mountains, to the west is the familiar Savannah woodland which stretches forever westward.

On the way there, you’ll pass mountain quite unlike anything you’ve ever seen before…

Black Mountain is steeped in mystery. The mountain consists of huge granite boulders of ancient magma – some as large as a house – and totally devoid of any soil. The soil has eroded away over the years and exposed an enormous pile of granite boulders.

Danger lurks within the mountain, with deep chasms and a labyrinth of chambers. People have been known to disappear into Black Mountain and never return.

Why The Name “Cooktown”?

Cooktown is a beautiful place. As we said earlier, it has an unspoilt old-world feel, really laid back.

Captain Cook was laid up here for 48 days in 1770 whilst repairing his ship. He had come to grief on the coral reefs just past Cape Tribulation – so named because this is where his tribulations began. Cook had inadvertently sailed straight into the treacherous maze of reefs we now know as the Great Barrier Reef.

Endeavour River (known as Waalumbaal Birri long before Cook showed up) was named after his ship. It is here that Joseph Banks first sighted kangaroos (or ganguuru). Banks must have thought he was imagining things at first!

Relations between local Aboriginal people and the ship’s crew were generally okay, however some inevitable misunderstandings were treated tactfully by both sides.

I recently learnt that Cook and his men happened to land and camp on neutral ground – country common to all mobs, used as a meeting place. By sheer accident he was safe because he hadn’t set up camp on anyone’s country before asking permission.

Cooktown (originally Cook’s Town) evolved from the Palmer River gold rush in 1873. In October 1873 a party landed at the mouth of the Endeavour River. Some established a port and others forged a path through impenetrable scrub to the goldfields nearly 200km to the west-southwest.

The existing inhabitants of these lands took exception to hoards of people trampling through their country. Inevitably, killings on both sides were common. A familiar pattern was repeated here – the Aboriginal people resisted fiercely, but their weapons were no match for rifles.

By 1875 – just 2 years later – Cooktown had 63 licenced hotels, 40 brothels and just 2 churches! Palmer River had 15,000 miners at its peak, 10,000 of whom were Chinese. Nearly all of these people passed through Cooktown. They all lived in canvas lean-tos through both the Dry and the heat, humidity, mud and slush of the Wet.

When the Palmer River goldfields were spent, many miners defected to the Halls Creek gold rush in the Kimberleys, Western Australia. The Chinese miners had severe restrictions on what ports they could dis-embark from. This was an attempt to keep them out of the goldfields. So many Chinese simply walked – or attempted to walk – over 3,000km from Palmer River to Halls Creek.

The death toll must have been huge. Starvation, exhaustion, sickness and killing by hostile Aboriginal people were very real threats.

Chillin’ Out In Cooktown – What to See

So what can you see and do around Cooktown? Well, the first thing I’d suggest is to go for a walk into the town centre. Soak up the atmosphere and get a feel for how laid back this place is. It feels like you’ve stepped back to the 1970’s (I mean this in a good way!) and landed in a sleepy seaside village.

Check out James Cook Museum while you’re in town. The building was originally a convent and a girl’s school and was donated by the church. The nuns were evacuated in WWII and never returned.

The museum has detailed information on Cook’s voyage and an excellent Indigenous centre. Well worth a visit.

Peta had been to Cooktown as a young child. She remembers swimming on a beach near Cooktown, surrounded by mountains. We found it – Finch Bay. What a magnificent place.

We dipped our toes in the waters of the Coral Sea. We chose not to have a swim. Maybe it had something to do with the sign warning of a recent crocodile sighting…

Grassy Hill is at the northern end of town. The 360 degree views from this lookout are incredible. You can see out to the Great Barrier Reef, Endeavour River, Mount Cook and rugged mountains to the north and west.

The cemetery is worth a look. There are lots of young children from the late 18th and early 19th centuries. Sadly, disease wiped out many of the young and vulnerable. A segregated section holds Chinese, who died a long way from home.

When the gold rush was in full swing, the Botanic Gardens were established. The Gardens were let go when the rush was over. They have been restored to their former glory and are well worth a visit.

About half an hour south of Cooktown is the incredibly beautiful Trevethan Falls. This is one of the few places you can swim without being eaten!

Once of the highway, the road is good for a while… until you turn right onto a track through the bush. The last 200 or so metres is rough, rocky and laced with tree roots.

But it’s worth the effort.

The cool, crystal-clear water is exactly what you need after the reasonably hard (but fortunately short) slog in. Glide in and take in this magical spot.

In stark contrast to Trevethan Falls, Archer Point is windswept point with a bay that’s a favourite haunt of kite surfers. But it’s equally beautiful.

The view from the point at the lighthouse is fantastic… the clear waters of the Coral Sea stretch north, south and east to the horizon. Just be careful the wind doesn’t pick you up and blow you away!

Back in Cooktown, spend time wandering around town. They have a rich and vibrant collection of sculptures, artwork, interpretive tiles embedded in the footpaths and so on. They even have a cannon!

And you’ll need a keen eye. Every time we retraced our steps, we’d see something else we hadn’t spotted previously.

The people of Cooktown are certainly a talented bunch… and rightly, very proud of their town.

Cooktown is a beautiful place. It has a warm, relaxed and easy-going atmosphere. Many people simply use Cooktown as a launching point for their Cape York trek.

But it’s worth spending some time in Cooktown itself to soak up the atmosphere and get to know the place. You won’t want to leave.

It’s one of the few towns in Australia where indigenous and white people live together harmoniously. That’s a very refreshing (and all-too uncommon) sight to see.

And when you’re ready to move on from Cooktown, camping is available right on the ocean at Eddies Camp. This is an incredibly beautiful camping spot.

Cooktown is on Kuku-Yalanji Country.

2 thoughts on “Discover Cooktown, FNQ – A Sleepy Town With a Lively Past”