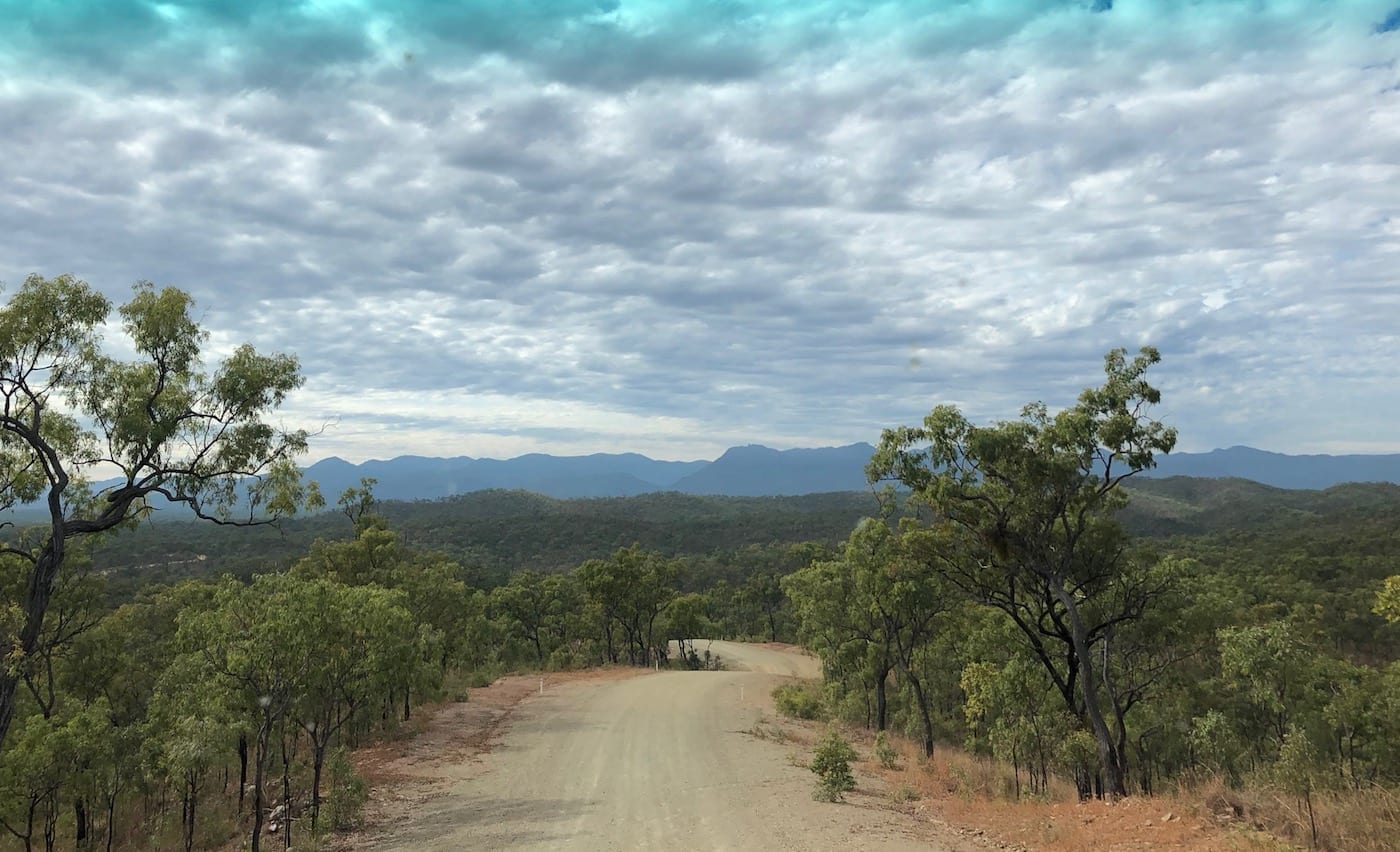 Palmer River Goldfields are in rough country. Rough, isolated and desolate. Ghosts are everywhere. Down the abandoned mine shafts, in the valleys, around the old shanty towns.

Situated inland of Cooktown QLD, Palmer River Goldfields are surrounded by rough, rugged terrain in every direction. To even contemplate walking from Cooktown to here is sheer madness.

At first you would have encountered crocodiles, mangroves, swarms of mosquitoes and well-organised Aboriginal fighters intent on defending their lands from the invaders.

All for the chance to maybe find some gold, maybe strike it rich. Or maybe not…

If you travel up the Peninsular Developmental Road from Mareeba to Laura, you’ll pass a turnoff to Whites Creek Road. This is South of Palmer River Roadhouse. While the terrain along this section of road is hilly, you have no idea of the wild country to the West.

It’s a fantastic drive. The road zig-zags along steep ridgelines until the ridgelines abruptly end. Then you dive down into a deep gully, straight off the side of one mountain then back up the side of the next mountain to pick up the next ridgeline. This repeats seemingly forever. I hope you like corners!

The terrain is a maze of gullies, most deep and steep-sided. Even the slopes on the sides of the hills are cut through with dozens of small gullies. So the road is a continual rollercoaster ride… up, down, left, right.

Now we were on a well-formed road, recently graded. Spare a thought for the miners pushing wheelbarrows and provisions through this country. They were following a rough track, all the way from Cooktown then down through this wild country.

And once they arrived, they were faced with extreme heat, very little water, no food and hard, rocky ground.

Why Were The Miners Here?

James Venture Mulligan lead a group through here in 1873, searching for possible goldfields. He discovered alluvial gold and returned to civilisation with over 100 ounces of alluvial gold. The gold rush was on!

A port was hastily arranged at the location where Captain Cook had repaired his severely damaged ship in 1770, now called Cooktown. This grew and supplied prospectors with their needs… equipment, food, liquor and dozens of brothels.

Prospectors hacked a track Westward then South through thick scrub and rough country, arriving at Palmer River Goldfields about 200km later. Chinese miners flocked to the goldfields, swelling the population on the diggings to around 15,000.

For Aboriginal people, their way of living was destroyed. They fought back hard, employing guerrilla warfare tactics in this wild landscape. Eventually guns defeated spears, a familiar story across Australia.

By late 1875, alluvial gold had run out. Prospectors turned their attention to other goldfields and companies moved in to mine the rock reefs.

Digging into the impenetrable reefs of rock, chasing gold seams proved to be a costly exercise. By the 1880’s it was all over, no longer viable.

Given the isolation of Palmer River Goldfields, it’s unlikely many struck it rich here. Ornate buildings in Cooktown clearly show that the smart ones were those who provided supplies.

What Can You See Now At Palmer River Goldfields?

Maytown sprang up beside Palmer River. It was a shanty town providing basic provisions to the miners. We visited Maytown in June and the Palmer River was almost dry, just a chain of stagnant waterholes. It’s hard to imagine how this would have sustained 15,000 people.

In fact water was a perpetual problem. In this tropical climate, the miners either had little to no water or endless torrents in the Wet. They were either working in fine, powdery dust or sticky mud.

Maytown is no more. Just a few piers where the post office once stood, some stone guttering, a memorial and lots of old wire, corrugated iron and rusty water tanks. The town sat on top of a hill, completely exposed to the elements.

You can drive to remnants of various old mines. They generally have bits and pieces of old mining equipment and old mine shafts. Be careful around the mine shafts.

If you look on a map, you’ll notice the mines follow a line from South-East to North-West. The gold seams are embedded in a rock layer that’s been stood vertically on its end. Many of these seams disappear deep into the ground, uneconomical to pursue.

Once you’ve seen enough, you can camp on the edge of the Palmer River. This is a bush camp with no facilities. There is a National Parks camp, however it’s a long way North.

If you’re coming from the East along Whites Creek Road, follow a sign to Palmer River Goldfields. This takes you down over Palmer River and into the Mining Reserve, as described earlier.

If you’re coming from the West, the way in is slightly confusing. Our Hema Map iPad app showed a road into Maytown from Whites Creek Road. So we followed this to Palmer River crossing.

This is a pretty rugged crossing. It has the lot… deep sand, mud and big rocks. We decided to walk across to Maytown rather than drive. It was only after driving back out onto Whites Creek Road and following this East, that we found the main access road into the Mining Reserve.

Take care in this area. Even on Whites Creek Road there’s several disused mine shafts. And don’t take any of the side tracks. They’re on private property, so keep out.

Palmer River Goldfields are tucked away in an insanely rugged landscape. You’ll leave this place shaking your head. Why would people would risk their lives chasing gold in this forbidding country?

Few were successful and many died in their pursuit. Their ghosts surround this country… them and the hundreds of Aboriginal people slaughtered in pursuit of a shiny metal.