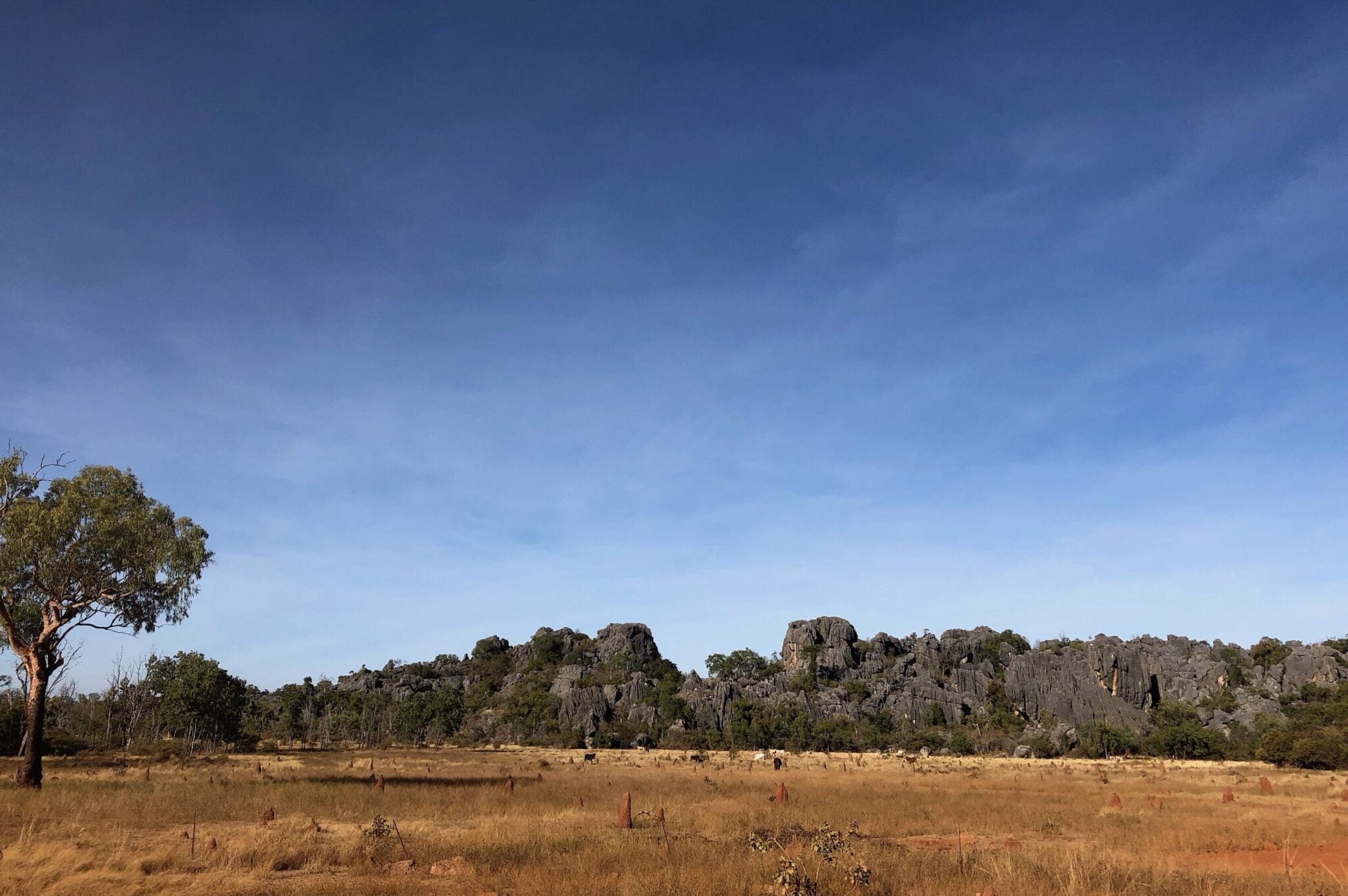 Chillagoe lies 140km West of Mareeba in Queensland, and surrounded by mysterious black mountain ranges. We had a look around the town… and discovered Chillagoe’s beauty lies underground.

If you approach Chillagoe from the West along the Burke Developmental Road, you can’t help but notice strange mountain ranges around you. They are dark black, jagged rock with huge splits and cracks running vertically.

The occasional tree clings desperately to them in places, but they’re mainly devoid of vegetation. So what are these strange mountain ranges?

It turns out they’re coral reefs! Around 400 million years ago, this area was under a shallow sea. Coral reefs formed in this ancient sea bed.

Then about 350 million years ago, this area was compressed and folded. The coral reefs were twisted vertically, to form the weird looking mountain ranges we see now. So this explains the strange vertical splits in the rocks.

Now coral reefs are primarily limestone… and where there’s limestone there’s caves. These ranges hide hundreds of caves within and are popular with cavers.

Fortunately you don’t have to be an extreme caver to enjoy the beauty hiding underground. Chillagoe-Mungana Caves National Park contains several caves. You can join a guided tour or explore by yourself.

We decided to explore by ourselves this time. We started at Bauhinia Cave entrance, which is a narrow hole in the rock. You descend immediately. After a few more steps, we were faced with a vertical drop over a slippery rock. We could have slid down easily enough. However we couldn’t see how we’d be able to get back out.

So we swallowed our pride and backed out of there.

Onto Pompeii Cave. This was a bit easier! It dropped down quickly over large rocks then opened into a cavern. We sat there for a while, enjoying the silence.

To gain a full appreciation of these caves, I suggest a guided tour of one of the larger caves. Contact The Hub Visitor Information Centre in Chillagoe for information on how to book a tour.

A tour of a copper smelter doesn’t exactly sound appealing. However, it really is quite different to the image that has no doubt formed in your mind!

This smelter was built in the late 1890s. It took ore from surrounding mines and extracted copper, lead, silver and gold. The smelter opened and closed numerous times, until closing for the final time in 1943.

Interestingly, the smelter was never profitable. However, it did open up the surrounding regions.

Numerous interpretive signs explain the history of the site, the surrounding geology and some excellent old photos. What struck us most was how hot and exposed this smelter would have been. No doubt, night shift in summer would have been a popular shift!

Set yourself up at the caravan park. Find a cool, shady spot. Then go for a walk around the town.

An old bank vault sits outside the Visitors Centre and the pub is worth a look. You can also check out the railway station, court house and police museum.

Oh, and the milkshakes at the service station/cafe in front of the caravan park are amazing. Old style chocolate milkshakes served in a tin mug. Yum!

One word of warning. The shops have basic supplies only. You can always find enough food to cobble together a decent feed. Just don’t expect a full range of food there.

Spend a few days at Chillagoe and have a look around. It’s the perfect place to relax and watch the world go by.