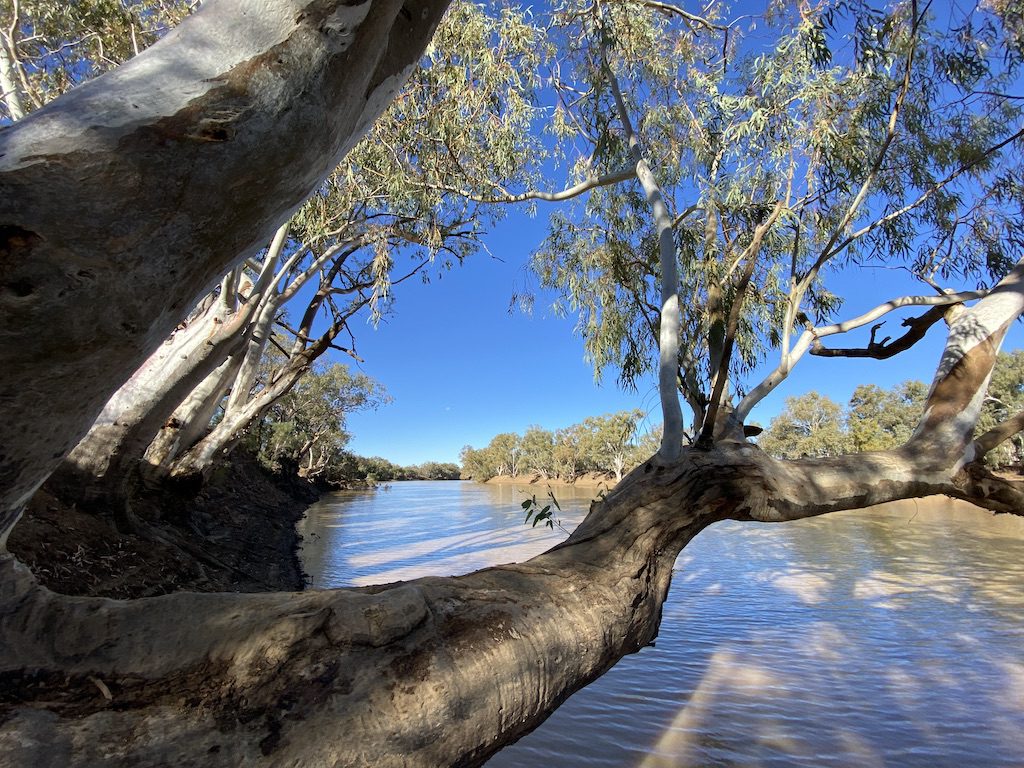 Welford National Park is a special place. It’s one of the few places where you can experience the best of Outback Queensland in one place… an iconic Channel Country river, vast floodplains covered in Mitchell grass and even a taste of desert sand dunes.

Even better, Welford boasts several excellent drives. And if you keep an eye out, you might spot some pretty amazing wildlife.

So how do you get there?

It’s safe to say Welford is a fair way from anywhere. After all, it’s about:

Welford National Park is remote, yet readily accessible if you’re set up for remote travel.

You don’t need a high clearance 4WD to get to the Park, although we’d strongly advise you do. But you will need a “proper” 4WD for two of the three driving tracks within the park.

We drove in from Blackall, passing through Emmet on the way. With a population of two, Emmet’s a pretty quiet place.

It was originally a busy railway siding, but not any more. Just one house and one store sit exposed to the elements on bare flat ground. It would be pretty warm in summer! An old bloke leant out of the store window, staring at us as we drove past. Maybe he’d never seen a vehicle before…

After Emmet, the country changed. We passed rocky ridges that for some reason had been cleared of all scrub. Maybe they’re trying to create a new desert.

The land started to slope very gently down towards Barcoo River. Lots of black soil and huge areas of green meant we were on the massive Barcoo floodplain.

Thousands of cattle were munching happily on the Mitchell grass. We drove past Trafalgar Station, turned right at the Jundah-Quilpie Road and crossed the Barcoo River into Welford National Park.

One thing to keep in mind. National Parks have done a fantastic job with their interpretive signage. They have stacks of information and a good balance of information about the First People and the colonists.

Stop and read these information boards. You’ll learn a lot about the region.

The only camping spot is at Little Boomerang campground. We camped at Trafalgar Waterhole many years ago, however camping’s no longer allowed there.

Little Boomerang sits on the banks of the Barcoo River. The banks down to the water are steep, although there’s access for swimming or launching a kayak at the western end of the campground.

This is an ideal spot to gaze across the river and admire the outback scenery. Then late afternoon, turn your chair around and be treated to an incredible outback sunset.

Little Boomerang has a drop toilet. Otherwise, you’ll need to be entirely self-sufficient, including firewood. There’s no rubbish collection, so take all your rubbish out with you.

There are about eight campsites, although a few aren’t clearly marked. QLD National Parks allow a maximum of 20 people to stay there at once. Some sites have shade, while others are quite exposed.

And you can have a fire, depending on what time of year you visit. Just make sure you bring firewood, as you’re not allowed to collect it from within the Park.

There’s no phone reception in the Park, except for a very weak, intermittent Telstra signal at the top of Sawyers Creek viewpoint on the Mulga Drive.

April to September is the best time. Any other time will vary from uncomfortably hot to unbearably hot…

Keep an eye on the weather forecast before you visit Welford. If it rains out here, you’ll be up to your shins in black soil for quite a while!

Welford Station, A Link To Horrors Of The Past

Richard Welford was a wealthy and well-connected squatter. In the 1870s, he decided a huge tract of land along the Barcoo River would now be his. He named it Walton Downs (renamed Welford Station after his death).

Conflicts escalated between the original inhabitants and these ring-ins who had claimed their land. Eventually Welford was killed by the Aboriginal people, which set off a frenzy of revenge massacres by the squatters.

Not far to the south-east, Hell Hole Gorge became a massacre site. Indigenous families were slaughtered and thrown into the gorge.

A lot of secrecy surrounds this massacre, perhaps because direct descendants of the perpetrators still live in the region.

Like so many other mass murders across Australia, not much is known about it in the white community. It was swept under the carpet and white-washed from our history.

Martyn Bryant’s murderous rampage in 1996 at Port Arthur is often touted as Australia’s worst mass shooting, with 35 killed and 23 wounded. And yes, this was horrific.

But you don’t need to dig very far to discover the Port Arthur massacre pales into insignificance, compared to the senseless mass poisonings and shootings during the frontier wars.

We need to face up to what happened in the past, otherwise we’ll never progress as a nation.

Let’s look at what you can see and do. And the best way to discover Welford is to take the drives.

The River Drive is a 12km drive across the Barcoo floodplain. While at first you might think they’re not much to see… well, that’s kind of the point!

You get to appreciate the extent of the floodplains.

These vast, flat black soil plains get rejuvenated whenever the Barcoo spills its banks, and spreads far and wide across the arid country.

A short side-trip takes you to The Jetty. This is a natural rock formation resembling a jetty – if you use your imagination! Take a breather… sit on the jetty and take in the magnificent old river red gums lining the steep banks.

You can drive the River Drive in a conventional vehicle.

If you want to see a snapshot of the varieties of landscapes on offer in Outback Queensland, then the Desert Drive is essential.

This 22km circuit is 4WD only, as it’s quite sandy in places.

Keep an eye out for wildlife. We encountered a large yellow-spotted monitor and several spinifex pigeons along the way.

Pretty soon, you’ll pass a Desert Waterhole lined with river red gums. This long billabong sits uneasily among the spinifex country. It’s a sign that you’re in a transition zone between the floodplains of the Barcoo and the very eastern tip of the Simpson/Strzelecki desert system.

You continue winding through the spinifex plains and there are a couple of quite large sand dunes. A walk to the top reveals a vista over the surrounding plains, plus the chance to look for tracks in the sand.

We spotted the tracks of many small lizards and a maze of dunnart tracks. (If you’ve never heard of a dunnart, go here to find out more). It’s always good to see the native wildlife is doing well.

About 1/2km on from the second sand dune, you’ll see a capped bore-head just off the road. Exploration teams drilled 2,500m underground in 1986. Instead of oil, they found water at 1,800m. So the bore was used as a water source.

The spinifex gives way to mulga and gidgee scrub. Pretty soon you’ll pass an old set of cattle yards, water tank and trough. They’re reminders of the pastoral history before it was declared a National Park.

You continue through the scrub until reaching the Jundah-Quiplie Road. Turn right and loop back to Little Boomerang campground.

Mulga Drive is the longest of the drives within Welford National Park, at 71km return. It starts near the southern entrance to the Park, heading east from the Jundah-Quilpie Road.

You’ll cross floodplains until reaching a concrete causeway over a small creek. Just past here is the National Park depot, with various sheds and accommodation.

Within this depot is the old Welford Station homestead. It is a rare example of a rammed earth house, but there’s no public access. Built in 1882, it’s now used as a home for National Parks staff.

Beyond the homestead is 4WD only and you’re not allowed to tow a camper or caravan. The track can be pretty badly washed out in places, so you’d be well advised to heed this advice.

Pretty soon the track leads you to Frances Waterhole. This extensive billabong supports a wide range of birdlife and other creatures in the dry times. It’s a good place to stop and soak in the atmosphere.

The country eases back onto floodplains. Take the turnoff to Trafalgar Waterhole. This was once a camping area, but you’re not allowed to camp there any more. However, it’s a great morning tea or lunch stop.

Back on Mulga Drive, you’ll keep crossing the black soil floodplains until the track forks. Take the left fork, signposted Mulga Drive and Sawyers Creek. The right fork is the return leg of this loop drive.

Pretty soon, the floodplains give way to ridge country. You’ll drive through sandy mulga and gidgee country. From here, the track slowly rises into rough mulga country with its trademark gullies and rocky escarpments.

And if you’re lucky, you might see a black-headed python. This fella was more interested in checking us out than getting off the track!

After plenty of twists and turns plus a few decent washouts, you’ll see a sign to Sawyers Lookout. It’s a short sharp walk to the top of the escarpment, surrounded by mulga trees.

The rough rocky track is a reminder of how rough this country can be. And once you’re at the top, you’ll catch glimpses of the ocean of mulga scrub stretching away in the distance.

To the south you’ll see Mt Welford. And keep an eye out for wildlife. We saw a flock of spinifex pigeons. They look comical with their enormous spinifex-like crests sticking straight up from the tops of their heads.

Apparently, this is also a good place to see yellow-footed rock wallabies at dusk.

Back down the rough walking track and back in your vehicle to Sawyers Creek. This is a real surprise… an extensive billabong lined with river red gums. It’s a perfect spot to stop for lunch.

Places like this are vital water sources for wildlife. It you sits quietly for a while, you’ll see plenty of birds coming to the billabong for a drink and for a feed of insects.

Head back down the track and turn left onto the return loop. This track meanders through mulga scrub until eventually popping back out onto the extensive floodplains of the Barcoo.

After a while, you’ll be back on the track where you started.

Welford National Park is one of those special places you sometimes stumble upon unwittingly. It’s also a symbol of the battles fought between blacks and whites during the colonial wars.

Spare a thought for the original inhabitants. They had a peaceful lifestyle along the river, with everything they needed for a comfortable life. All that was turned upside down forever when Welford decided to claim the land as his own.

I wonder how much the landscape has changed and degraded since people like Welford “conquered” and “improved” the land.

If you need camping gear or 4WD accessories for your next outback trip, BCF stock a wide range of camping gear.