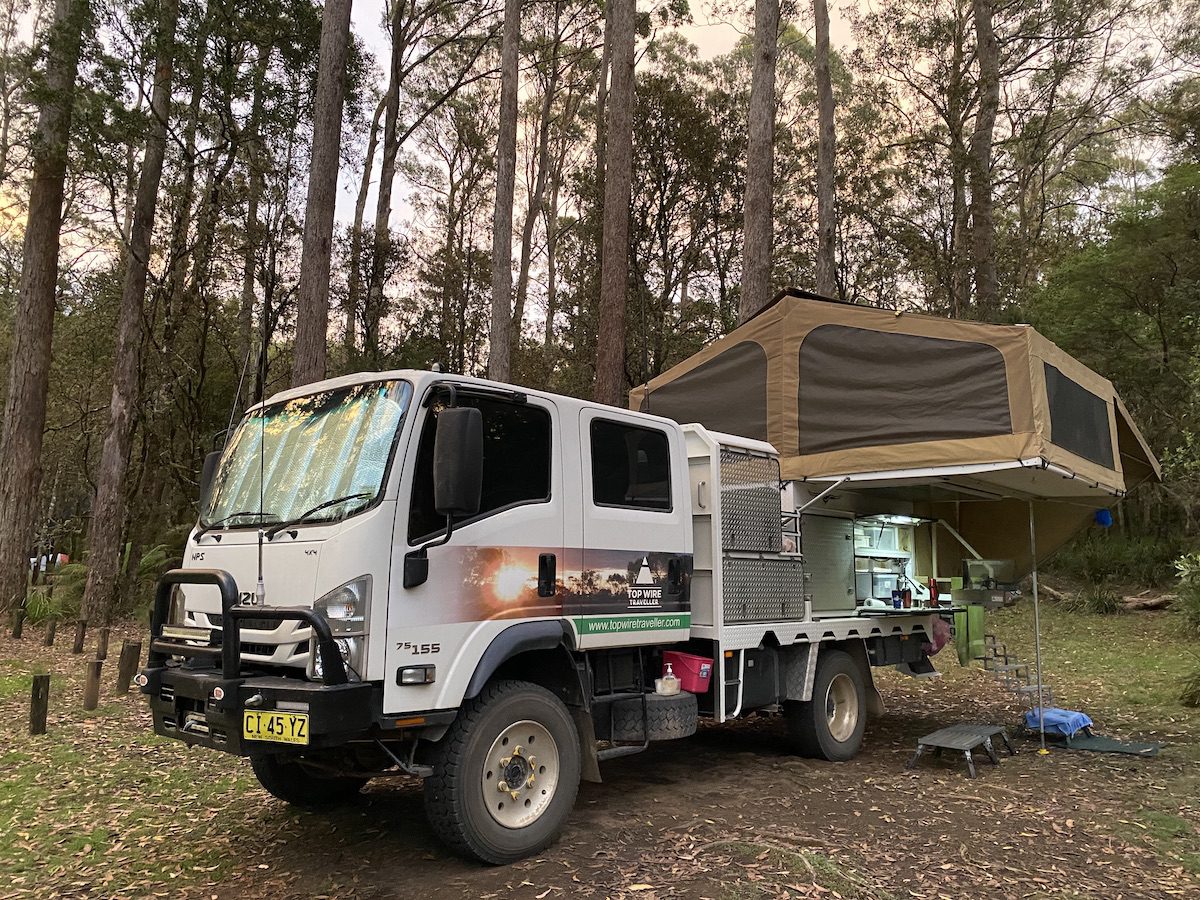 Most people who own an Isuzu truck know they have a reputation for reliability. Well, our trusty 4WD truck camper (NPS 75-155) recently had its fifth birthday.

For more than three of those five years, it’s done plenty of hard miles on outback dirt roads. We live in it full-time and take the road less travelled whenever we get a chance.

We do a review every year, listing any issues or major modifications. Here’s the links to previous reviews:

Now it’s time for an update… what’s happened in the last 12 months? Has it been reliable and have we had any issues? Let’s find out.

“Where Has this 4WD Truck Been in the Last Year?”

I don’t need to tell you the past 18 months have been strange, to say the least. We’ve travelled whenever possible, between lockdowns and state border closures.

We’ve lost count of the number of border crossings we’ve done over the years. But who’d have thought we’d be locked in or out of the different states within our own country.

Despite these challenges, we’ve managed to travel quite a bit. Here’s a brief list:

Wow, that’s more than I thought!

A lot of those trips have been over rough and badly corrugated roads. The odometer is at 158,000km, which means we did 30,000km in the last 12 months.

This averages out to just under 32,000km a year since new.

Just one. The UHF antenna whip finally decided it had dealt with more than enough vibrations. We had expected this, as we discussed here.

And it didn’t actually fail. Instead, it worked loose in the whip’s base where the antenna meets the metal piece. Considering how much it belly-dances, we’re actually really happy with its lifespan.

All Terrain Warriors fitted two new tyres and re-balanced two we had bought elsewhere. Those two weren’t balanced properly, as we detailed here (see “Any Repairs or Replacements?”).

The tyres we replaced had 55,000km on them and are okay to use as spares. As usual, I’ve been a bit slack in rotating them since. But they seem to be wearing well so far.

They really should be rotated every 10,000km, as recommended by Steve from Toyo Tyres. Find out more details about tyre pressures for light trucks here.

We totally modified the rear seat area and the storage boxes on the tray, as we detailed here. This major change suits our needs and is a big improvement.

Perhaps the biggest bonus is the extra weight it’s provided over the front axle.

Prior to the changes, we were running around 2.8T over the front and 3.8T over the rear axle. We haven’t taken it over a weighbridge, but front-back weight distribution is definitely better.

The result is a smoother and more settled ride… although it still rides like a truck!

The other major change? Mick from Melbourne had an OEM suspension driver’s seat and a Stratos suspension seat available and kindly offered them to us… thanks Mick! We took both, with the idea of fitting the Isuzu seat to the passenger side.

However, the Stratos seat was too high for my short legs! So I swapped it out for the Isuzu suspension seat.

The improvement in ride is light years ahead of the original fixed seat. The less padded Isuzu seat isn’t really a problem for my light frame. With a decent seat cover and the Airhawk truck seat cushion we already had, it’s really comfortable.

Now I can drive for a decent stretch of time without feeling like I’ve been riding a rodeo bull!

“What Other Mods Are You Planning to Do?”

With the Stratos seat sitting in the garage collecting dust, the plan is to fit it to the passenger side.

However, there’s a whole lot of issues around fitting it and then getting a compliance plate. We’ll let you know when (or if) it ever happens.

No problems at all. Just the usual regular services by Isuzu, regular checks by me and that’s it.

One watch-out if you run independent fuel tanks, two primary filters and a switching valve. We’ve had a few issues with one fuel system not being properly primed after a couple of services over the years.

It’s not a big deal. Just make sure you switch to the other fuel tank and manually prime it for a minute or two after the filters have been changed. This ensures you won’t have any dramas.

“Would You Buy Another One?”

We definitely would. It has been extremely reliable so far, with minimal issues during the past five years.

It’s travelled over many rough roads and been up to the task… and then some. A small Isuzu 4WD truck like ours is a great option as a tour vehicle.

Yes, it’s slow and rides like a truck. But everything is a compromise.

We would much rather put up with the “leisurely” performance and rougher ride than be running overweight all the time.

As we travel, we see more small trucks set up for touring. The big American utes are also popping up everywhere, mainly as tow vehicles for ridiculously large caravans.

But for us, you really can’t go past Japanese reliability and ease of finding workshops, which carry spares and are familiar with them.

Here’s to another five years!