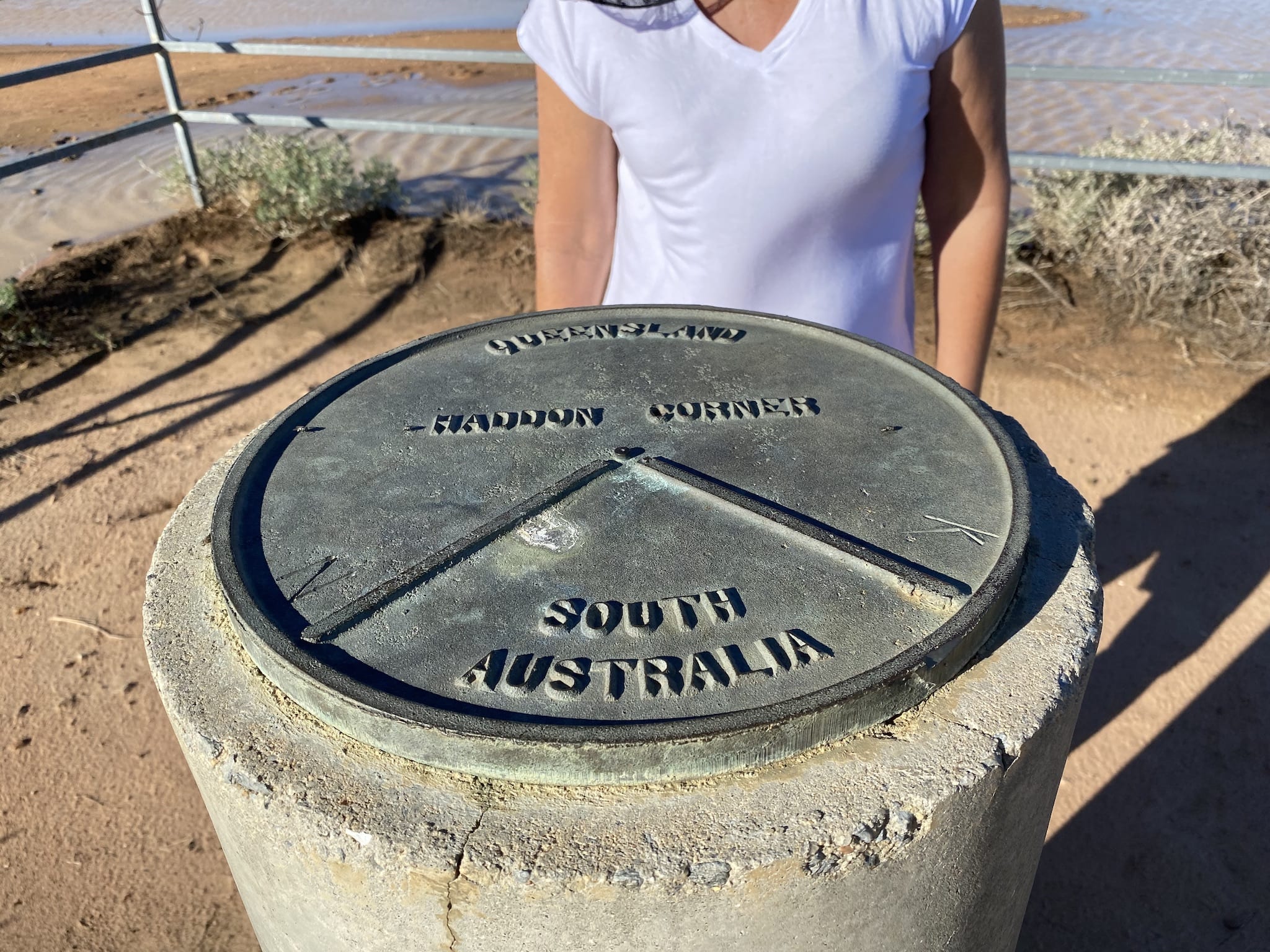 Note: This article contains an affiliate link to Apple. If you click through and make a purchase, we earn a small commission at no extra cost to you.

There’s two ways you can travel from Innamincka, SA to Birdsville or Windorah in Western Queensland. The first is the well-known Cordillo Downs Road.

The other is Arrabury Road via Haddon Corner.

We’ve tried to take Cordillo Downs Road many times. However, each time we’ve been stopped due to wet weather. And it happened again recently. The top (Queensland) section was closed.

So we took Arrabury Road instead.

Arrabury Road vaguely follows the South Australian/Queensland border, from the Dig Tree turnoff on the Innamincka/Thargomindah Road in Queensland.

After pushing north for about 250km, you meet the Birdsville/Windorah Road. Around 50km before the turnoff, you’ll see the road into Haddon Corner which is about 15km each way.

This is a remote drive, with fuel being few and far between. Top up wherever you can. You can refuel at Innamincka, Birdsville or Windorah.

Be prepared for remote travel. We didn’t see another vehicle the entire trip.

Our original plan was to spend some time exploring around Innamincka. Coongie Lakes is another place we haven’t been able to get into in the past, due to wet weather. So our plan was to go there.

But it wasn’t to be…

All roads were open around Innamincka, except for the northern end of Cordillo Downs Road. But they shouldn’t have been.

We took the Dig Tree Loop Road, which is a spectacular drive through ancient Mesa country on the northern side of Cooper Creek. At least, I think it was spectacular – I was too busy avoiding getting bogged. And this was on the red soil slopes of the hills!

Unfortunately, we got into one of those situations where we’d gone too far to turn around… turn around and likely get bogged or keep going and hope we didn’t get bogged.

By the time we reached the Dig Tree, the sun was low in the sky.

Next day, we drove to Burke’s Grave on Cooper Creek. The road was open, with plenty of wet black soil stretches which we easily avoided by driving around them.

Then we started along the track to Cullyamurra Waterhole, only to be faced with a long stretch of black soil covered in water.

Time to turn back.

Given what we saw, there was no way we were going to take on the Coongie Lakes track. By all accounts, it crosses many creeks and black soil flood plains. We had a vague idea of the type of country around Coongie Lakes, after travelling Walkers Crossing Track to the west of the Lakes a little while back.

Time for Plan B.

With one eye on a huge rain system bearing down on inland Australia from the north-west, we decided to get out of there. With a few days to spare, Arrabury Road looked like a good option… and the last dirt road we’d be able to travel on for a while.

So we headed north, into the unknown.

The road varies from rough to sandy to a wide gravel “highway” further north. The first southern section was a real surprise.

We had no idea the Cooper Creek basin and northwards is actually an ancient valley. The surrounding flat-topped mesas hinted where the original tableland had been millions of years ago.

You wander across the valley floor, surrounded by the most spectacular ochre-coloured hills. This is a special part of the journey and would be a fantastic sight at sunset.

Eventually the road climbs onto the tableland, which stretches out in all directions. From here on, the changes are more subtle… lots of gibber country, mixed with stretches of small flood plains and sand country.

Eventually you’ll reach Sturt’s Stony Desert. It’s a seemingly never-ending vista of gibbers covering the landscape. To think Charles Sturt traversed this country then decided to walk back through it because he was fascinated by the landscape, defies belief.

If you’d like to learn more about Sturt’s inland expedition, I highly recommend “Sturt’s Desert Drama” by Ivan Rudolph. It’s a fascinating read.

About 200km north of the Innamincka/Thargomindah Road, you’ll see the turnoff to Haddon Corner. This is a must-see side trip.

The Haddon Corner track continued the theme of black soil and mud. Surprisingly, the track quickly drops down off the gibber country onto a vast floodplain. Water from previous rains was still lying around and made the trip a little nerve-racking.

The road was open, and two other sets of wheel tracks meant we could avoid any bog holes.

Be careful of the sand dunes. The track crosses two large dunes. Both are easy to climb from the west (on the way in) but can be difficult from the east. It might be wise to get out and walk them first.

The first dune has an easier “chicken track” just to the north of the main track, so you’ll generally be okay there. But the second dune can be a bit wild on the western side.

We never made it to the second dune.

After cresting the first dune, the swale between the dunes (over half a kilometre long) was covered in pools of water. A couple of others had driven through, but they’d obviously had some problems in deep bog holes.

Rather than risk getting bogged up to our axles, we decided to camp on the western side of the first dune and walk to Haddon Corner. It was a couple of kilometres, but worth the exertion!

The actual marker post at the corner was in the middle of a mini-lake. Not what we expected! In fact, we were lucky to see the corner like this. Most times it would be extremely arid.

After trudging through the ankle-deep mud and water, we took the obligatory photos, turned around and headed back to camp.

Camping Under the Stars

That afternoon, the sun put on a classic desert sunset for us. Deep reds reflecting off the dunes and shimmering off the pools of water. It’s not often you get to see the desert like this.

Then with no moon, the stars blanketed the sky from horizon to horizon. Fantastic!

A word of warning. I’m sure during peak season, there’d be several travellers visiting Haddon Corner. But we were there in March and it was extremely remote. As I said earlier, we didn’t see another vehicle the whole trip.

That’s another reason why we were nervous about taking on the muddy track… if we’d have become bogged, there was no chance of anyone helping us out.

Back on Arrabury Road, the road continues much the same until you reach the Birdsville Developmental Road. At this point, the road widens, sometimes many lanes wide. We couldn’t quite figure out why.

After this, it’s a long trek east to Windorah. The gravel road was generally in good condition. However, I imagine it would be horrendous after the Birdsville races or Big Red Bash.

Arrabury Road is well worth the drive. The amazing Mesa country in the south, then the vast Sturt’s Stony Desert give you a taste of the Outback at its best.

And the bonus is Haddon Corner. We’d never given this border corner much thought before. However, it’s a special place… especially at sunset.