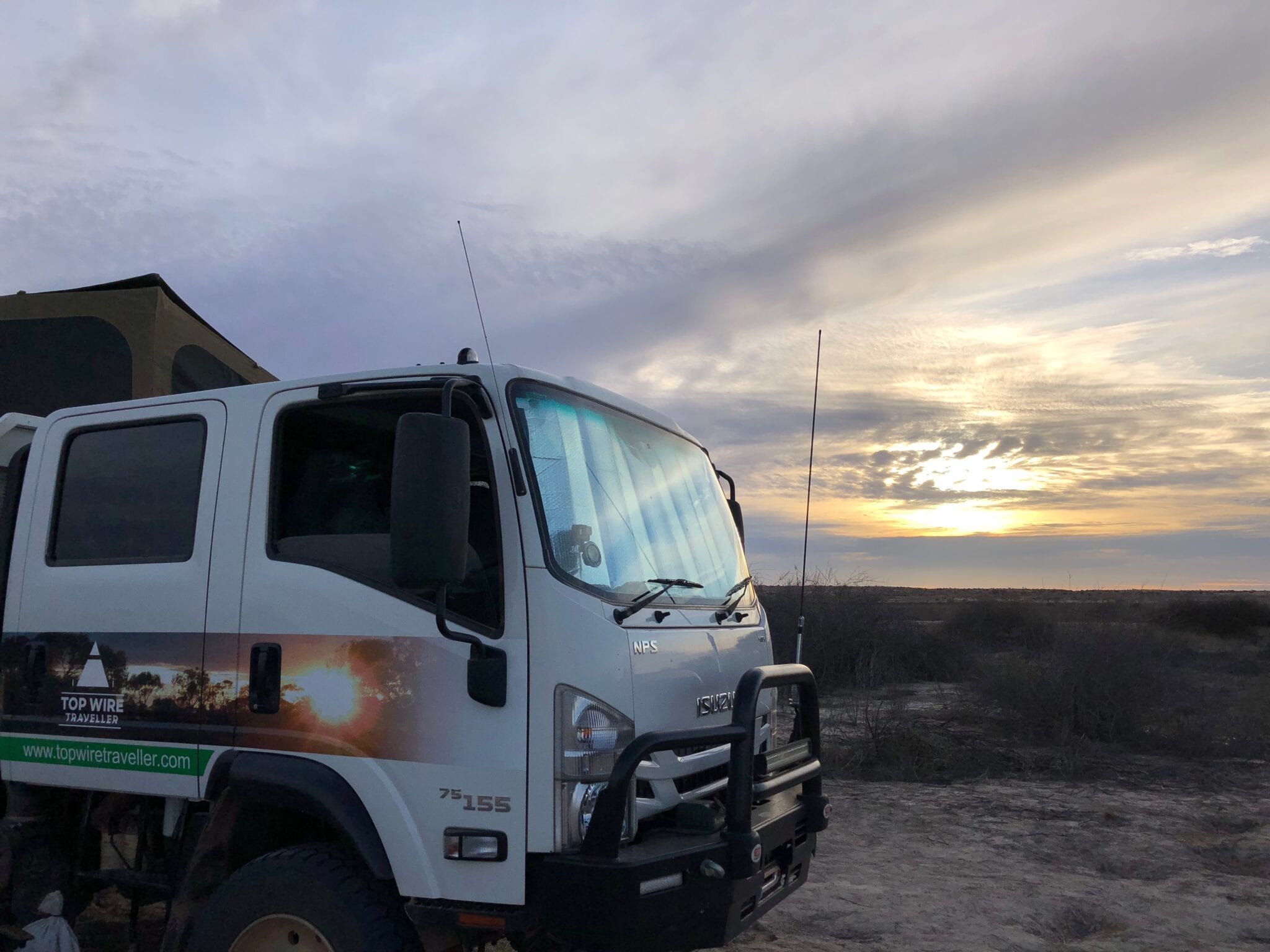 Walkers Crossing Track is less than 200km all up. But in that short distance, you’ll see a bit of everything!

Alternatively, you can bypass Innamincka if you’re in a hurry and meet up with the Strzelecki Track at Moomba. All up, this is about 170km.

Along the way, you’ll pass through all types of country, from gibber plains to flood plains.

Coming from Birdsville, Walkers Crossing Track is easy to miss. Without a decent GPS, you could easily drive past the turnoff.

It looks like an insignificant station track disappearing into the endless gibber plains. The first part is slow going as you cross harsh gibber plains on a fairly rough track. This is one of those places where you feel like an ant… the gibber stretch to the horizon in every direction.

Like most things in the desert, the gibbers play a vital role. They protect the underlying sand and soil from wind and water erosion. You only have to look at the sections of washed out track to see what happens when the protective layer of stones is removed.

A while after bouncing your way across the gibber plain, you’ll see some big sand dunes in the distance. At first we thought we might be doing a few sand dune crossings. As a point of interest, Burke and Wills followed these dunes north, on their push to the Gulf.

However, the track cleverly weaves around all but a few of the dunes. You’ll encounter some sandy sections of track, but they’re nothing to worry about.

And all the while, you’re treated to beautiful desert dune country.

You’ll need to pay attention though. We were astounded how much traffic we met on Walkers Crossing Track, at the northern end anyway. By lunchtime though, we pretty much had the track to ourselves. We figured the earlier traffic was the morning “rush hour” from Innamincka.

Some of the sandy sections have high sandy banks. The track itself is only about 1½ vehicles in width, twists and turns, and has scrub on both sides. So oncoming traffic can appear without notice.

We actually backed up about a hundred metres to let a large group through. One bloke stopped and had a yarn. He was English, it was his first time in the outback and he was loving it! His face was like a split watermelon, with a huge grin from ear to ear.

It’s so good to see people appreciating the outback for the first time. They can’t quite believe it’s real.

Then another bloke pulled up for a yarn and we compared notes about our trips. This track is certainly friendly!

Be careful when passing on these roads with their high-sloped sandy banks. One person passed us too quickly. The back of their ute slid sideways off the bank and missed hitting our tray by millimetres.

Like any outback driving, slow down and take care.

Driving Across A Lake

All of a sudden, the track spits you out onto the vast expanse of an unnamed salt lake. In the grand scheme of things, this is a small lake in this country. It gives you a sense of how enormous some of these ephemeral lakes are out this way.

At the southern end of the lake you’re into Cooper Creek floodplain country. The red dunes continue, but in between the dunes is powdery soft soil. The sudden appearance of scruffy gum trees is a sure indicator of moisture held well beneath he ground.

The path of Cooper Creek is extremely confusing out here. On the maps, it stops, restarts, splits into two. It’s a mess of branches and dead ends, as the rare flood events find the lowest point through the dunes.

Not far east of Innamincka, Cooper Creek splits into two diverging branches. The north-west branch of Cooper Creek was to our east, as we entered the Innamincka Regional Reserve. This feeds Coongie Lakes. As these wetlands fill, the water backs up and begins to flow south towards Lake Eyre via Cooper Creek.

Getting closer to Walkers Crossing, Cooper Creek abruptly turns south. The track follows the Cooper all the way down to the crossing.

Walkers Crossing is the place to camp overnight. You could camp pretty well anywhere off the side of the track. But be aware it’s private property and do the right thing.

Keep in mind that from the Birdsville Track to Walkers Crossing, you’re on a PAR or Public Access Route. So you’re actually driving through private property. You’re allowed to camp up to 50 metres off the road.

However, Walkers Crossing was the best spot we saw. Who could resist camping on the banks of Cooper Creek? Especially when it’s flowing… a rare event.

We chose a spot on the eastern side of Cooper Creek and had the place to ourselves. Bliss after a hectic couple of weeks among the crowds of the Birdsville Big Red Bash!

The sun poured magnificent colours into the clouds, as it retired for another day. Just on dark, the sky looked rather threatening. This was a bit concerning, considering we were in the middle of a black soil plain!

There’s a bridge over Cooper Creek at Walkers Crossing now. Several roadtrains pounded along the road, heading west towards oil and gas fields. Just west of the crossing, the PAR meets a well-formed road, obviously built for heavy mining traffic.

So we were a little disappointed at seeing something as civilised as a bridge at Walkers Crossing. Nevertheless, Walkers Crossing is a great place to camp and soak in the outback.

A Maze Of Confusion

Next morning we pushed on, along the arrow-straight mining road. This felt like a highway after the PAR we’d followed the previous day. However, the track splits once you cross the southern border of the Innamincka Regional Reserve.

To the right is the “No Access” Mining road, to the left is a rough track. And from here you weave through a maze of tracks going every which way. You can’t really get lost, just follow the signs to Innamincka.

But what’s really frustrating is the number of times you cross smooth, wide private mining roads as you bump and lurch along the rough track. Oh well, that’s all part of the adventure!

You’ll skirt the absolutely massive ephemeral Fly Lake for at least 10km, and there’s oil and gas pipes running all over the place. There’s no doubt you’re well and truly in the Moomba Basin.

About 50km south-east of Walkers Crossing is Gidgealpa Waterhole, which stretches for a few kilometres. Although dry when we were there, it’s another great candidate for an overnight camp.

About 15 kilometres on is the turnoff to Innamincka along another PAR. If you take this route, you’ll come out at the southern side of Innamincka. There’s plenty of camping along Cooper Creek at the Common.

We chose to continue straight ahead, as we were heading towards Wild Deserts, just east of Cameron Corner. Moomba processing plant appears on the horizon after about 20km. The road skirts around Moomba and meets the Strzelecki Track.

This is a big shortcut if you’re heading down the Strzelecki. Rather than having to go through Innamincka, you cut off about 140km of dirt road. Still, you do miss seeing the iconic settlement of Innamincka…

We had no expectations of the Walkers Crossing drive, we knew nothing about it at all.

Having done it, this track is a great alternative route between Birdsville and Innamincka. You get a bit of everything.. desolate gibber plains, red sand dunes more like those around Birdsville, the wide open Cooper floodplains and then the classic stark white country of the Strzelecki Desert. Plus you get to camp on Cooper Creek!

A road full of surprises and breathtaking scenery.

If you’re searching for camping gear and accessories, BCF have a wide range available. Go here to find out more.

2 thoughts on “Walkers Crossing Track, SA – A Shortcut From Birdsville To Innamincka”