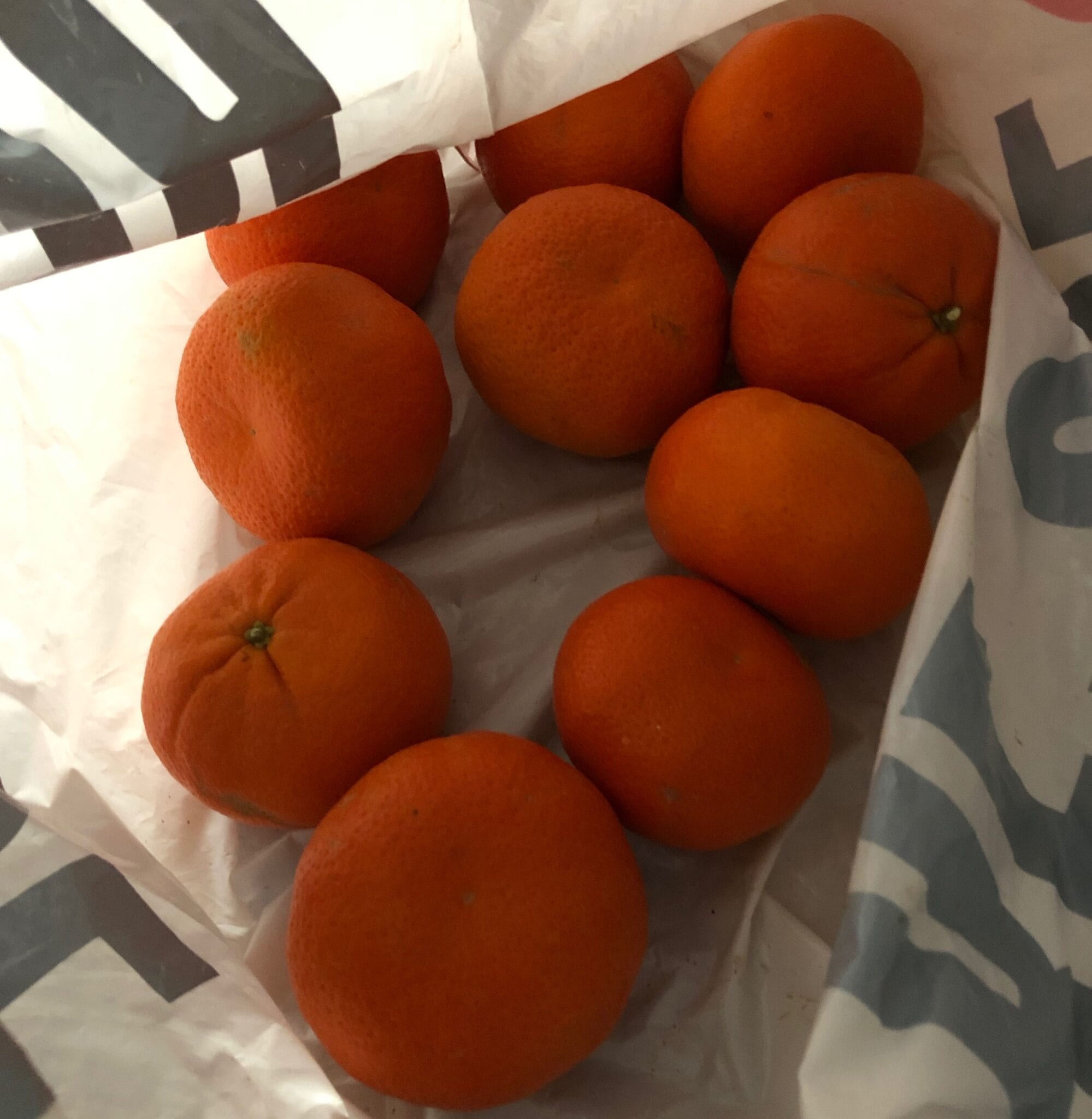 We were in the main street of Wentworth NSW, a town built on the junction of the Darling and Murray Rivers.

After pulling up, Peta walked across the road to check what time the takeaway shop closed. I was sitting in the truck waiting… staring into space, daydreaming about something insignificant.

Then I noticed a lady talking animatedly to Peta. The lady opened the back door of her Falcon, reached in and emerged with a bulging white shopping bag. Peta was smiling and nodding, thanking the lady profusely. What was going on?

The lady jumped in her car, backed out then pulled up beside me in the middle of the road (as you do!). Through her window she yelled out, “I couldn’t find you, you’d gone. I’ve given your wife a bag of those beautiful mandarins”.

Ahh, now it all made sense.

Okay, let’s rewind a bit. Why were we in Wentworth and who was this lovely lady?

We volunteered as officials for the Sunraysia Safari, a four day off road race which is run in the region every year.

We drove through Pooncarie three times in three days. On two of those days, the local community was catering for the Safari. All proceeds were going to the local primary school. And the feeds were amazing, two of the best meals I’ve ever eaten.

We’ve been to Pooncarie several times in the last few years and it’s one of our favourite places. The people are friendly and have so much pride in their community.

We love camping in their campgrounds beside the river. Like the rest of the town, the locals take great pride in the campgrounds and adjacent golf course… an unusual golf course without grass.

The hall and tennis courts are on a large grassed area and they keep their oval green and grassy. Houses are neat with neat gardens and the pub has lots of charm. The Old Wharf Cafe serves amazing coffee and cakes, plus they like to have a yarn to us blow-ins.

You might think using water to keep ovals and gardens alive is a waste, given the dire state of the Darling River. But I disagree. These people are surrounded by the most horrendous drought imaginable. The ground is bare and even the mulga trees are starting to die.

Every time there’s a windy day, another layer of topsoil takes to the skies and covers Pooncarie in red dust.

They are in desperate straits. This tiny patch of greenery helps keep them sane and gives them a much-needed break from the desperation and misery pressing in on all sides.

It was while we were having lunch that we struck up a conversation with the same lovely lady we met later in the day in Wentworth.

Her daughter and son-in-law own the Pooncarie pub, the Telegraph Hotel. Since the river dried up, the fishers have stopped coming and the grey nomads are disappearing.

She told us the town has been on bore water for a while now. The mineral-rich bore water gives her three year grandson chronic excema. The poor little fella scratches all day. And the only relief is expensive body lotion. So on top of a dwindling trade, her daughter and son-in-law now have to fork out extra money for expensive medication.

And now the river is just a couple of pools of disgusting green stagnant water. The residents of Pooncarie use this to water their gardens and keep the precious grass alive.

It’s about to dry up completely.

So what will they be left with? Dead gardens, an oval and hall grounds turned to dust. Every time they walk out their front doors, all they’ll see is dust. And when the wind blows, every house and business will fill with fine red dust.

The reality is, Pooncarie will struggle to survive. They’re in an endless loop. The fishers have already stopped coming and the few tourists still visiting will drive straight through. The pub, the shop, the cafe… what lies ahead for them?

Every second house is for sale. But who is going to buy them?

The reality is simply heartbreaking.

Although there’s one tiny glimmer of hope. Wentworth Shire Council is about to start trucking water to the town. It remains to be seen whether it’s enough to keep the grass and gardens alive… especially as summer approaches.

That Bag Of Mandarins

And what of that bag of mandarins, where does this fit into the story?

Well, I mentioned earlier about how the community was catering for the Safari. At the end of the hall was a huge box of seedless mandarins. The lady explained where they came from.

Between Wentworth and Pooncarie, was until very recently a progressive citrus industry. One of the growers had generously donated a mountain of the most beautiful mandarins to help feed the hungry Safari crews. By donating, they helped keep the cost of food supplies down for the volunteer caterers.

The thing is, this will be their last crop ever. They can’t take any water from the Darling, because there’s none to take. The trees are dying and the citrus growers have no income. No more beautiful seedless mandarins, no more exporting to Japan and China, no more income.

Years of hard work and invaluable expertise gone… just like that.

A Heart Of Gold

It was only when we ran into the lady at Wentworth later in the day, that she explained where she had disappeared to. She had gone to get us a huge bag of mandarins, but when she returned we’d gone.

So she was really excited to run into us and finally them hand over.

This really affected both of us. Here was someone facing a bleak future, yet her only concern was to give us something… something she was proud of. Not for thanks or recognition, but because she was genuinely proud of that produce. It was grown locally and you honestly wouldn’t taste better fruit anywhere.

Here we were, two ring-ins she’d only met for ten minutes. Yet she was proudly showcasing the last crop of locally-grown mandarins… ever.

Her generosity and pride in her community was truly humbling.

It put into sharp perspective the contrast of our lives. These people were cheerily catering for a bunch of hungry racers, who were most likely driving cars worth ten times the value of their homes in Pooncarie.

The Safari came and went. It injected some precious funds into the community and gave the people of Pooncarie something to look forward to… then it was gone. A new day dawned.

All the uncertainty and stress settled back over the town like the never-ending red dust from the west.

And you know what? It doesn’t have to be this way.

Hanging The Southern Basin Out To Dry

This quiet desperation follows you all the way from Wentworth, up through Pooncarie, Menindee, Wilcannia, Tilpa, Louth, Bourke and beyond to towns like Brewarrina and Walgett.

Every town, every landholder is being strangled to death by lack of water.

Yes it’s a record drought. But there’s way more to the story of why Pooncarie has run out of water.

It took a while to join the dots, but finally all the pieces fitted together in my head. The pattern of systematic corruption and mismanagement is obvious once you start digging. You can read more about what’s at play in the Murray-Darling Basin here.

At the time I wrote the above article, I faced quite a bit of criticism. Some people thought I was seeing conspiracies where none supposedly existed.

But since then, numerous stories of mismanagement and corruption throughout the Murray Darling Basin have risen to the surface. My summation was spot on.

It all comes down to who owns the water rights. Giant corporations like Webster have no interest in keeping communities alive. All they want is the water.

And if that means “persuading” their corrupt mates in parliament to change the rules to benefit themselves, then so be it. The reality is, the massive water allocations in the northern basin have literally turned off the tap for those further south along the Lower Darling River.

Conveniently the Murrumbidgee is still open slather, available for the big corporations to plunder. We passed hundreds of thousands of hectares of brand new cotton paddocks and associated canals between Darlington Point and Hay, just waiting for the snow to melt and fill the Murrumbidgee.

The Darling has been mercilessly raped and pillaged. Now it’s the Murrumbidgee’s turn.

The Murray will also benefit from the snow melt. So the incredibly thirsty almond and walnut plantations along the Murray will benefit too. Funnily enough, the same big corporations (like Webster) are involved here as well.

At least we can eat almonds and walnuts I suppose. Cotton doesn’t taste too good…

By draining Menindee Lakes to justify the completely unnecessary Wentworth to Broken Hill pipeline, the New South Wales government has deliberately orchestrated a disaster along the lower Darling River.

Not only this, dozens of storage dams have been drained just so their big corporation mates could keep irrigating… Copeton Dam, Burrendong Dam, Keepit Dam to name but a few. Forget about the people downstream… the towns, the citrus growers, the graziers, the family farms, the river itself.

And now NSW deputy premier John Barilaro has decided the NSW government needs to build more dams. Cast aside all the checks and balances he says, get the bulldozers in there now!

Why do I smell a rat?

Could it be that Barilaro has seen a perfect opportunity to build yet more massive storage dams for his corporate mates at taxpayer expense?

The timing is perfect. Who’s going to oppose this, at a time when the mainstream community is starting to wake up to the unfolding disaster?

What a bunch of corrupt bastards.

Despite the endless roadblocks being thrown in front of them, somehow communities along the lower Darling River keep rallying. Pooncarie is just one of those communities that keeps battling on.

Somehow they find a way to cope. They keep going every day, hidden away in far western NSW, virtually unknown to people living in the cities.

I admire these incredibly resilient people. I just wish their future was brighter.

P.S. If you want to help these unbelievably resilient communities, add the Darling River Run to your next travel itinerary. Despite the drought, it’s still incredible country. Support these communities, have a yarn to the locals, spend some money in each town and help keep them going.

For more information on the Darling River Run, go here.