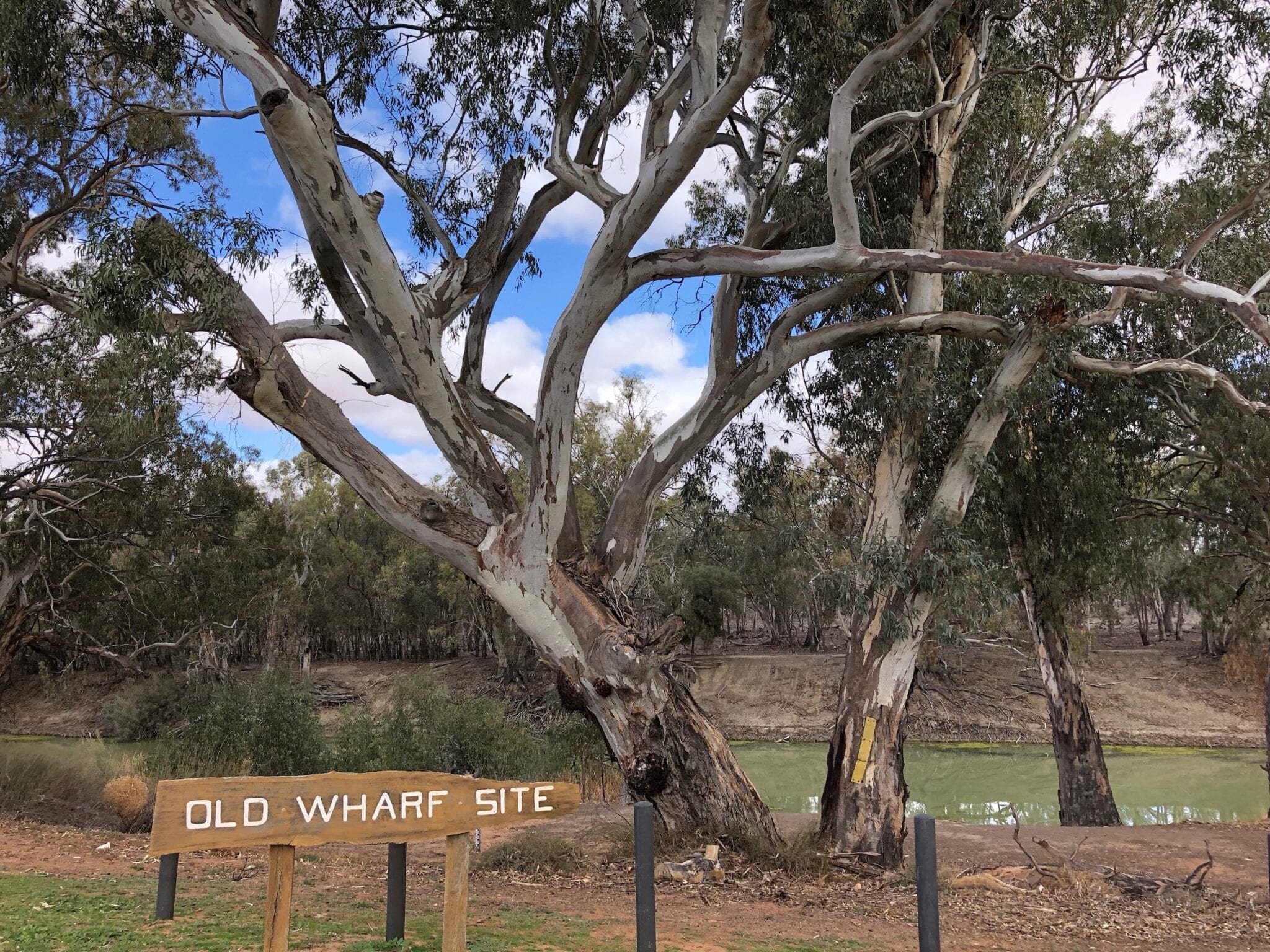 Pooncarie is one of those small towns you could drive through without really noticing. Perched on the banks of the Darling River between Menindee and Wentworth, there’s more to this town than you might think.

Settled in 1863, Pooncarie became an important port town. Graziers loaded their wool onto barges which were towed down the river to market.

Originally Pooncaira then Pooncaree, this town eventually became known as Pooncarie or the Port Of Pooncarie. Some of the old gravestones in the cemetery bear the name Pooncaira.

Why all the name changes? Well I’m really not sure. Perhaps the town was going through an identity crisis…

Unlike many small towns, Pooncarie is a neat and tidy place. And the community hall, playground and tennis courts as surrounded by green grass. Believe me, this is a novelty in these parts!

Making our way to the old wharf site, again it was well maintained and inviting. Even more inviting was the Old Wharf Cafe. Beautiful coffee and homemade cakes and biscuits were more than welcome after a long day driving.

A sign warning you not to swim in or drink from the Darling River stands out here. It’s a reminder of just how messed up this river is now.

Up on the main road, you’ll find the pub and the local store/service station. Both places are welcoming and the store is well-stocked for those bits and pieces you need as you travel. It’s not a supermarket by any stretch, however there’s enough essentials to keep you fed if you decide to make Pooncarie home for a couple of days.

There’s a free camp south of Pooncarie on the Darling River. It has no facilities, so you’ll need to be self-contained.

A much better campsite is just on the northern edge of town at Wakefield Park. Of course, it’s dry and there’s no grass except on the oval. But you expect this, especially in the middle of a severe drought.

You can choose to bush camp on the edge of the river or if you need power, for $10 per night you can plug in. There’s also drinking water available on tap, showers and toilets.

The oval is entertaining. When we arrived, a mob of sheep were grazing on the green grass along with a couple of hundred kangaroos and a smattering of emus. The following afternoon, the sheep had disappeared and the roos had taken over.

Leading off from the campground and picnic area is the Pooncarie Golf Course. The fairways are pretty bare, just bare black soil in fact. And the clubhouse is a tin shed with a huge awning to keep out the summer heat. I imagine a few stories have been told under this awning!

And if you’re feeling like a dose of local history, a short walk to the cemetery should fit the bill. Strangely the cemetery seems to be divided. Not by religion, although there are separate areas for the various denominations as usual. No, there’s a separate section which seems to pre-date all the other graves. Not sure why it’s like this, quite unusual.

The cemetery tells a tale of epidemics, with children the unfortunate victims. There are other tales of drownings and no doubt, some of the local colonial founders are buried there as well.

Spend a few days at Pooncarie. Many travellers drive through here on their way to Mungo National Park, to the east.

Pull up for a while, take some time to wander around and get to know the friendly locals. They’ve built an excellent set of facilities for such a small town, both for themselves and for travellers to enjoy.

The locals obviously have pride in their town, and it shows.