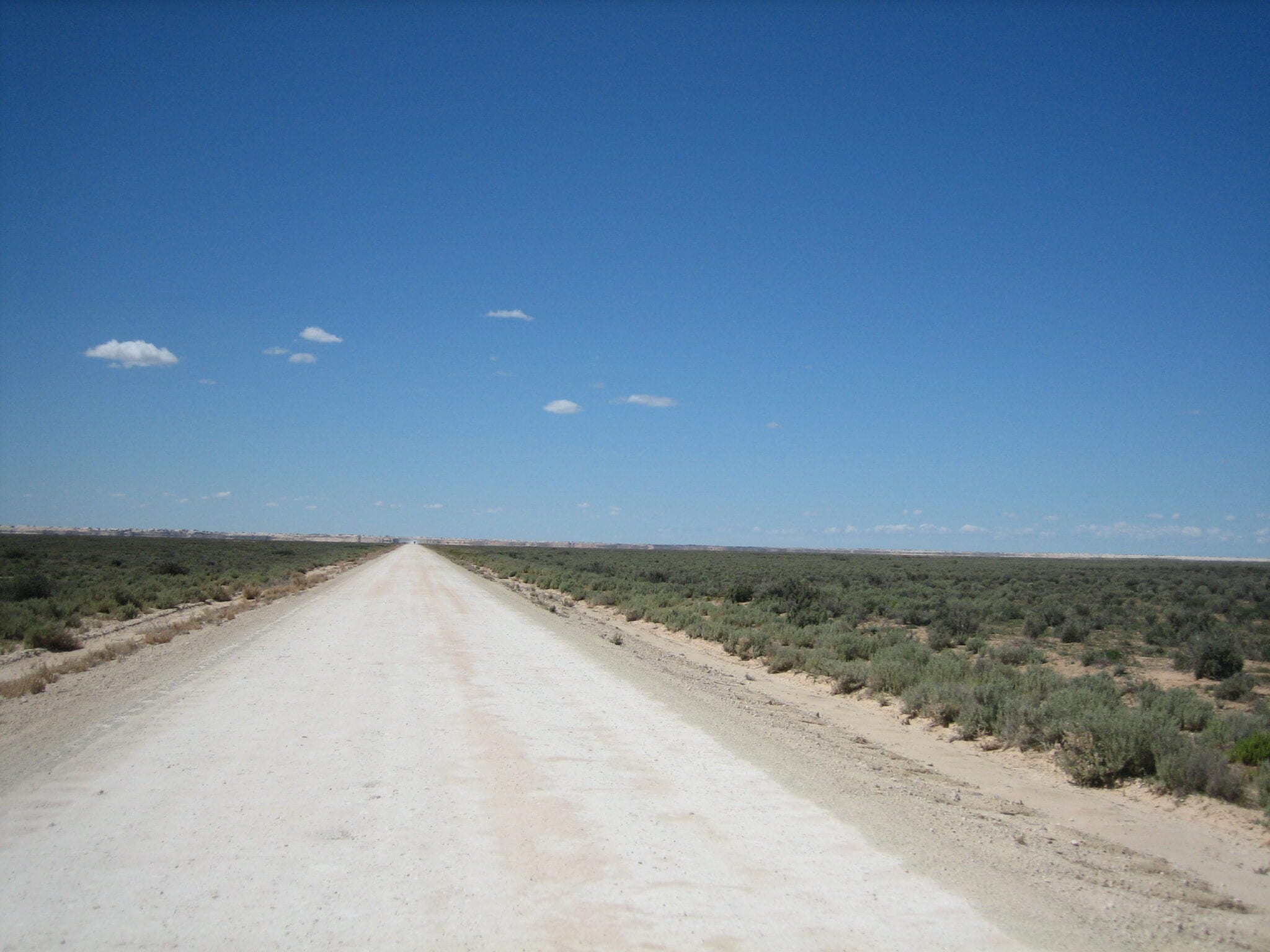 After 2 nights at Birdcage Reserve, we headed to Mungo National Park and spent 3 nights there.

On the way we spent some time in Hay, looking through Shear Outback. It’s an excellent history of Australia’s wool industry – well worth a visit.

The other notable must-see in Hay is the Bishop’s Lodge. Built in 1888, it was constructed of iron – presumably to keep the voracious termites at bay.

Balranald was next on the agenda. Having crossed the flat and featureless Hay Plain, Balranald was a welcome sight. It’s nestled on a bend of the Murrumbidgee River. Balranald is a neat, clean and tidy place. We fuelled up at an old-style service station. The old bloke actually manned the pump and cleaned our windscreen!

Parts of Balranald – Ivanhoe Road were dirt – at last we’re on dirt! The road was pretty tame with some fun sandy patches.

Mungo was brilliant. The showers were really dodgy and Charlie couldn’t get the hot water to work. So Charlie didn’t have a shower for 3 days, phew!! The rest of us showered and felt much better for it.

The history of the area is mind blowing. Lake Mungo was one of 5 lakes comprising the Willandra Lakes system. The Lachlan River changed course over 15,000 years ago and the lakes dried up. Prior to that, they were an abundant source of food for Indigenous folk.

A 70km loop drive takes you straight across Lake Mungo. You get a feel for the scale of everything out here. It was a huge, shallow lake in its prime. The dry lake bed is now covered in salt-resistant bushes happily surviving in the sand.

Once across the lake, the Eastern side of Lake Mungo is a series of sand dunes. They were created by thousands of years of westerly winds blowing across the dry lake bed.

In these dunes, all sorts of aboriginal artifacts are being exposed by the elements. Over-grazing by sheep in the 1900s and by rabbits has accelerated this process. It was sobering to see how much degradation has been caused by over-grazing.

The loop road took us vaguely North once we passed through the Eastern sand dunes. The kids loved the huge white dunes – what kid doesn’t! You could imagine a pristine shoreline might be hiding on the other side.

Living Underground – An Escape From Hell

On the Western side of Lake Mungo is the remnants of Zanci Homestead. It was originally a Soldier Settler’s block. They had an underground dugout as a retreat from the searing Summer heat. It gives you an idea of just how exposed the homestead was.

The final reminder of the Whitefella’s recent past is the woolshed. Originally 18 stands with blade shears, it was built in the 1860s. Each year up to 50,000 sheep were shorn with blade shears.

The woolshed’s made from cypress pine – one of the toughest timbers around. Even the termites break their teeth on cypress pine.

Enough of the colonial past. It’s just a blip on the timeline.

The real history of this place is hidden in the sand.

Ricky, Bianca and Josephine took us on an organised Discovery Tour, out to the Eastern dunes. These young Indigenous people belong to one of 3 local mobs – the Paakantji, Ngyiampaa and Mutthi Mutthi tribal groups. Their enthusiasm and respect for the land was infectious.

In these dunes, the world-famous Mungo Man and Mungo Lady were discovered. The dunes are brimming with artifacts and clues on how the people lived. As the wind erodes the sand, more items are continually exposed. Every item is another piece to the puzzle.

We were shown a camp fire with emu and duck egg shells. They were around 40,000 years old. We were told about a hearth (type of clay fire like a camp oven) believed to be much older.

We even found a few small animal bones in amongst the sand dunes – pretty exciting and awe-inspiring.The time scale is hard to get your head around. Us Whitefellas are used to being told the Roman civilisation was ancient – that was only 2,000 years ago!

The lands encompass 3 tribal lands. This can cause conflicts and disputes on how the lands should be managed. However, a simple yet effective scheme has been implemented to maintain harmony and give all 3 mobs a voice.

National Parks and Wildlife Service (NPWS) employs Indigenous people from all 3 mobs. Each mob takes turns to run tours and the Visitors Centre.

This allows everyone to have some ownership. They can maintain their links with their lands and have a say in how the Park is run. Ricky, Bianca and Josephine (mentioned earlier) were absolutely fantastic – their knowledge and sense of history really brought the past to life.

On our last night an aboriginal elder – Aunty Lottie Williams, age 77 – sat around the campfire with us. Auntie Lottie was born and still lives in Pooncarrie, on the Darling River.

She told us some of her stories as a child and some of the stories her mother had passed on to her. She was a very intelligent lady with a keen sense of humour. She had been to America to speak with the Indigenous Americans in her capacity as an elder on one of the NPWS committees.

Her father was a white man from Mount Gambier who married her mother – he was 83 when they married! She was really optimistic about life, but sad their language was dying out. Auntie Lottie has played a significant role in documenting their language on CD for future generations.

Mungo is an inspiring and spiritual place… a model for co-operation between the blackfella and whitefella.