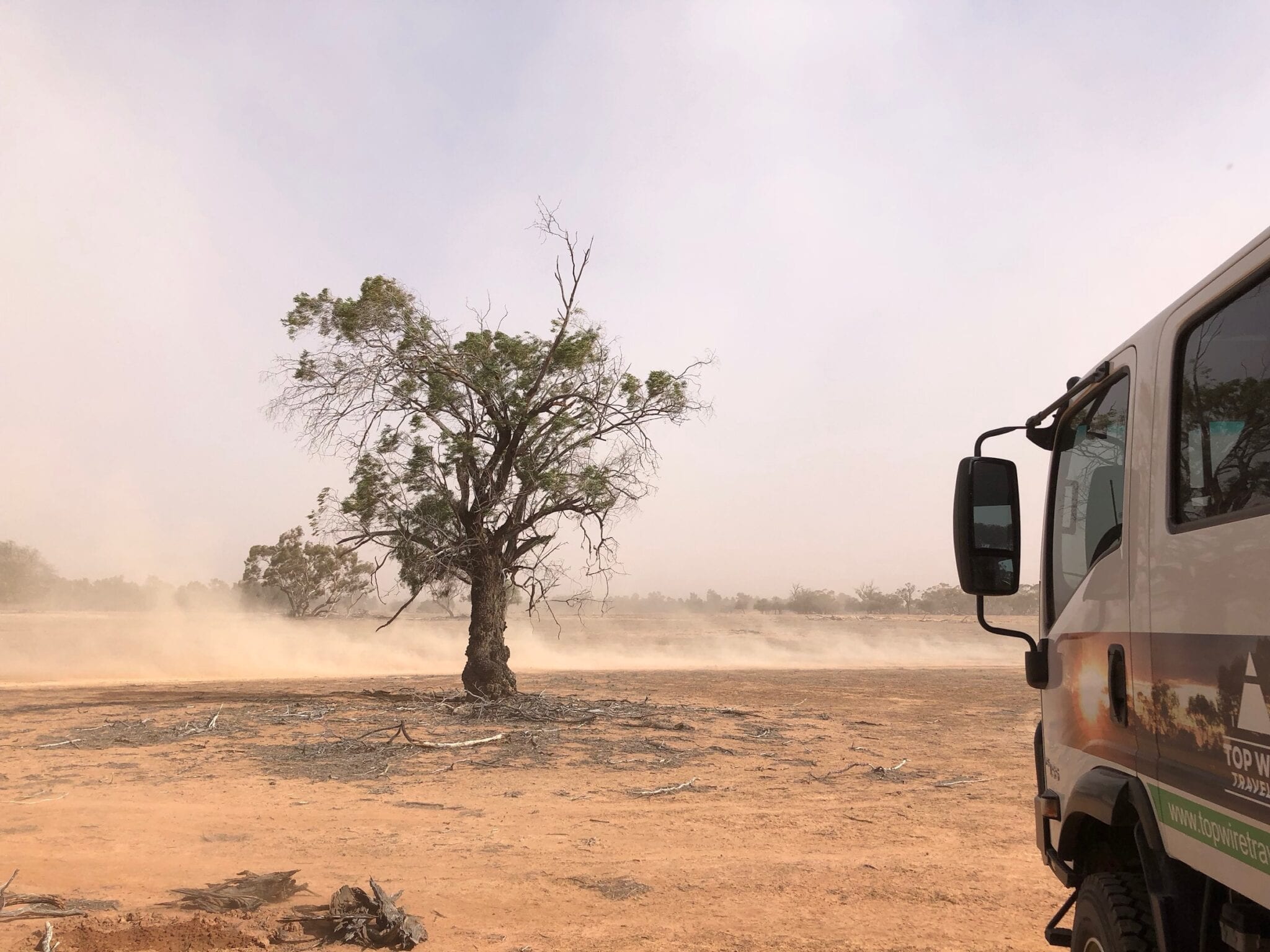 It’s one thing to see footage of the NSW drought in the media. It’s another thing entirely to be standing in the midst of it.

Yet the farmers we spoke to were philosophical. Worried no doubt. A shadow of a frown passed across their faces, as they spoke of the dire predicament they were in. But the underlying sentiment was determination to survive this drought.

As one farmer told me, “I’ve told my boys we just have to get through this”.

The country north of Wentworth is marginal at best. The Darling River cuts a ribbon of life through this country. At least it should. Right now it’s a green mess, full of blue-green algae.

It’s nothing more than a disgusting mess, an irrigation channel.

This is far more than simply the effects of drought. The plight of our supposedly iconic Darling River is a sad story of greed, corruption and mis-use.

As we drive north from Wentworth, the country quickly becomes desolate. Paddocks are bare. And when I say bare, I mean completely bare. The only thing covering the ground is a mass of burrs. Not burr bushes, just the burrs themselves.

It’s easy for us to come in from outside and be critical. Why is it farmed at all? How could the farmers let paddocks be eaten bare until there’s no ground cover to stop the wind from blowing their topsoil away? But when you’ve been living here for generations, this is your home. You get to love this country and try to look after it. After all, your livelihood depends on it.

That’s the thing about drought. It sneaks up on you.

Do they throw up their hands and sell them all, and lose all those years of hard work? Or do they hang on a bit longer… then a bit longer… spending thousands every month to hand feed them?

It’s a horrible predicament. And you can see this on the farmers’ faces. They’re worried, they’re desperate.

The First To Die

We mentioned the huge numbers of emus we had seen to one farmer, particularly dead ones. He said they are the first animals to die.

Unlike kangaroos, emus don’t travel far from their territory. Once the water runs out, they die of thirst. Or when the food runs out, they get so weak that one night they’ll sit down to sleep then won’t have the strength to get up again next morning. They just die when they’re sitting.

One of the saddest sights you’ll ever see is a kangaroo with its ribs showing, too weak to hop away. When the kangaroos start dying, you know things are dire.

We were surprised to see some farmers had planted crops. Perhaps they had localised storms earlier in the year and decided to roll the dice. With very few crops being planted due to the extensive NSW drought, their crop would be worth big dollars if their gamble paid off.

However these crops have either not shot at all, or have partially shot but not grown. Even if the drought broke today, it’s too late for these crops.

Farming can be a cruel life.

What’s concerning is what will happen come summer. We’re still in winter, yet we witnessed a huge dust storm. When the summer heat hits and bakes the land to a powder, it’s easy to imagine large portions of this country being blown into the Pacific Ocean.

Where’s The Hay Coming From?

All the farmers we spoke to mentioned the shortage of hay. They all said hay was getting harder to find and stocks in the southern states were running low. With the drought spreading into central Queensland, this situation will only worsen.

We can only hope that those who still have hay to sell will keep their prices reasonable and don’t try to take advantage of the situation.

Once the rains come and the drought breaks, don’t for a minute think all is well. The drought is the equivalent of you losing your job and having your house repossessed in the same week.

The drought breaking is the equivalent of you finding a new job and starting again. Once you find that job, your worries aren’t over. You need to spend years getting back on your feet.

It’s the same for the farmers.

The rains are just the start of a long process. Money’s tight and you always have that fear, the nagging doubts. What if it happens again next year? Is it worth the effort? How do I repay my loans? Where’s the money coming from?

I get tired of hearing how well off farmers are. The reality is very different. Sure, one year might be a bumper year. But this just makes up for the 5 lean years preceding the one good year. Could you manage your finances to cover this? I know I couldn’t.

And don’t for a minute under-estimate the mental health issues facing these people. Hardly surprising, given the uncertainty they’re facing.

What Can You Do?

There’s a few ways you can help. Right now, there are some amazing charities helping farmers through the NSW drought.

This excellent article from ABC News best sums up what you should and shouldn’t do.

And remember the towns. All over NSW, drought is decimating not only the farmers but the towns as well. Spend your next holiday taking a road trip. Spend some money in these towns and keep them going.

This drought is a bad one, really bad. The country’s dying.

In some ways it’s hard to imagine how it could get any worse. But with another hot summer looming, an already desperate situation will only get worse. Let’s hope for flooding rains.

The Wentworth/Pooncarie region in this article is on Barkindji Country.