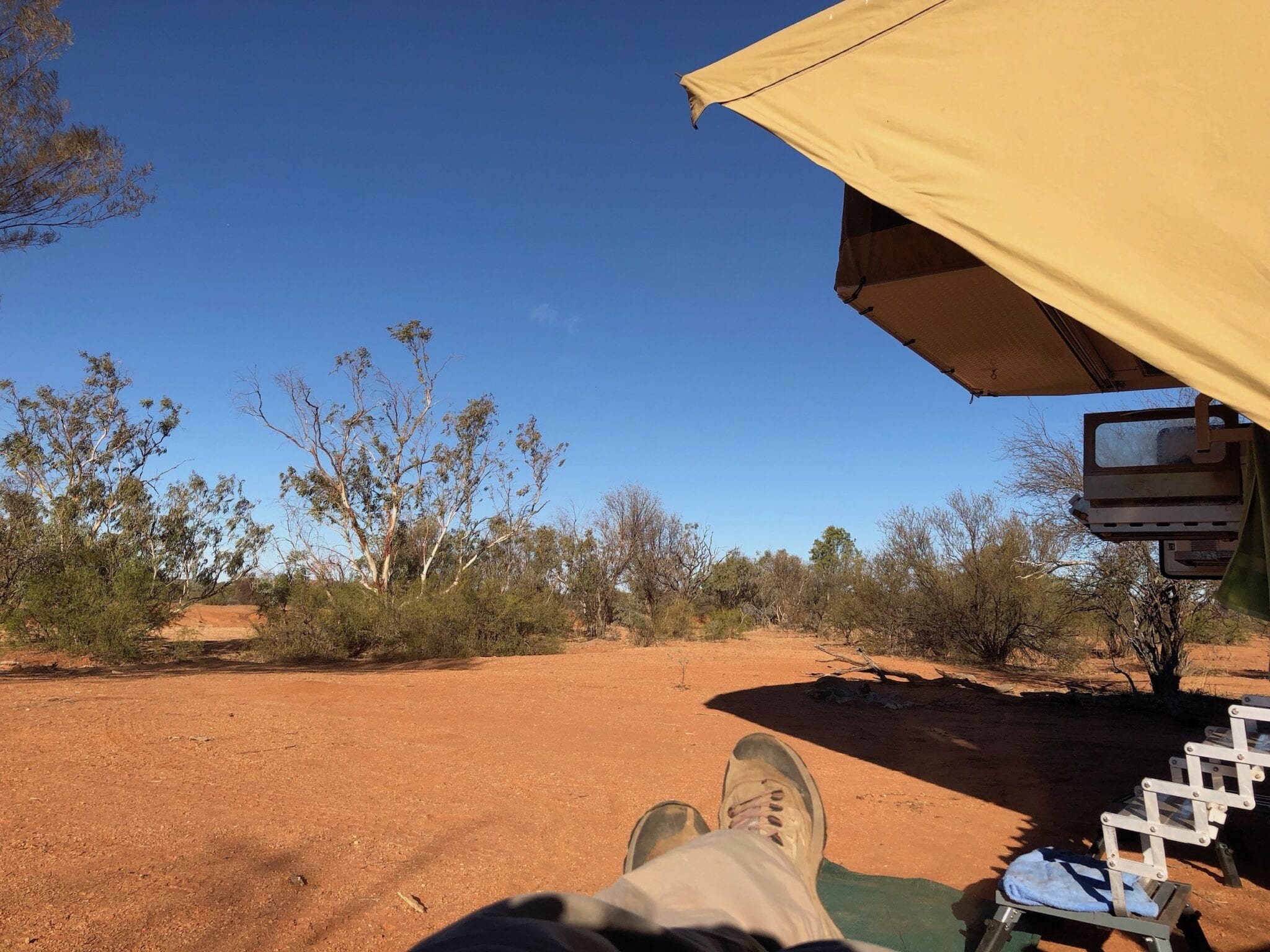 Tanami Road has a reputation of being boring and monotonous. We can’t figure out why, we loved it!

The Tanami stretches just over 1,000km from the Stuart Highway north of Alice Springs to the Great Northern Highway south of Halls Creek in WA. One thousand kilometres across the desert, an ever-changing desert with so much to see.

Coming in from the east, the Plenty Highway and the Sandover Highway are great routes to get you into the Red Centre. Then let the Tanami guide you out, towards the Kimberley.

This road is no longer a track. It’s tar for roughly the first 250km out of Alice Springs, then it changes to a wide, well-maintained dirt road. Road trains service the Granites Gold Mine near the western end of the Tanami, so the road has been upgraded to cater for road trains.

The turn-off to Papunya is about 130km out of Alice Springs, along the Gary Junction Road. This Aboriginal community is best known as the home of the Warumpi Band, an influential Aussie band in the 1980s.

The West MacDonnell Ranges sit to the left of the road in the distance, providing a striking contrast to the surrounding plains country.

Tilmouth Well Roadhouse is at the 190km mark. This is an ideal place to pull over if you were late leaving Alice Springs or are coming from the west.

You can buy fuel here and grab a feed as well. The food is great (especially the hamburgers and chips!) and the people are friendly.

The campsites are on grass and there’s plenty of shade. Amenities are basic, but clean and tidy. And the hot showers are most welcome!

We’ve also camped north of Tilmouth Well, over the northern side of Stuart Bluff Range. We pulled off the road and tucked in behind some mulga. With a small campfire burning and a nearly full moon, this was the full Tanami Desert camping experience!

Life Among the Desolation

Back on the road and heading towards Yuendumu, about 290km from Alice Springs. Just before Yuendumu, the tar ends and you’re onto the dirt. Yes, there’s lots of corrugations. However it’s easy to maintain speed and sit on top of them.

Surprisingly, this country weaves through low hills and ranges all the way through to Mt Doreen ruins. This rugged landscape is spectacular, classic Red Centre country.

You can camp near Mt Doreen ruins. They’re about 320km from Alice Springs and a good over stopover option if your trip started at Alice Springs.

The settlers who established this station eventually abandoned it due to lack of reliable water.

And it’s easy to see why. The desert was positively blooming due to recent rains, however the country around Mt Doreen was bare. The creek was bone dry, although there’d probably be water under the sand if you knew where to dig.

You can bush camp beside the creek. It’s such a peaceful place. Although when I visit places like this, I scratch my head and wonder what drove people to set up a station in such a desolate and isolated place.

Even in such barren country there’s life. We discovered bright red berries dropped from several corkwood trees and a brightly coloured mistletoe clinging bravely to a spindly shrub.

There’s always life in the desert. You just have to look for it.

After a night of gale force southerly winds, we continued on our merry way. Up the road we encountered two quad road train fuel tankers stopped on the road.  One road train had a blowout in one of its 86 tyres, hardly surprising on this road.

With the wind howling, changing a tyre would have involved swallowing mouthfuls of fine red sand. Not ideal…

We stopped at Renahans Bore for a quick look. As soon as we stopped, the wind picked up and dust was blowing everywhere. We decided Renahans Bore wasn’t that interesting and drove on!

The country had changed again to desert country, flat land stretching from horizon to horizon. An impossibly large number of termite mounds soon appeared, stretching way into the distance.

The Granites Gold Mine appeared on our left. It’s a massive operation, about 550km from Alice Springs. It even has an airport. Road trains feed this hungry beast, travelling on the Tanami from both directions to the mine.

Up the road you’ll pass the turnoff to Rabbit Flat Roadhouse, barricaded off and covered in Keep Out signs. Once a popular re-fuelling point, it’s been closed for a while now.

Granites Gold Mine is about 175km short of the NT/WA border.

Beyond the Granites Gold Mine is the Tanami Mine. You might notice a road heading off to the right. This is the Lajamanu Road and ultimately takes you through Lajamanu to the Buntine Highway.

With the trip meter ticking over about 725km since we left Alice Springs, we reached the NT/WA border.

But wait… is this the border or not?

It seems like someone decided the border was on top of a hill. NT have all their signs there, welcoming travellers into NT. It looks like WA also had signs there, but took them down. According to our Hema Map app, we were still a few kilometres short of the border.

Then a few kays further on, someone has thrown a couple of drums beside the road with “NT” on one drum and “WA” on the other. This actually matched our Hema Map!

There were no official “Welcome to WA” signs at all. We decided they’d given up trying to figure it out.

About 20km into WA, we pulled off Tanami Road to camp overnight. There was a spot about 50 metres off the road and up-wind of the road, far enough to avoid dust from road trains.

With the clocks automatically changing back 1½ hours, we were in for a long afternoon. When the sun eventually set and with the atmosphere full of dust, we were treated to a perfect sunset. Welcome to WA!

At about 8pm, a vehicle slowed down and stopped just up the road from us. The only vehicle that had been past for several hours… and they stopped. They stopped just past us, behind some scrub. Fair enough, maybe they were having a break.

But they stopped for ages, with just the faint glow of headlights visible. Then their headlights circled round in a full arc and disappeared. Hmmm, this is weird.

We didn’t hear them drive off. The scrub was hiding them and the wind was blowing the other way. Were they still there or not?

Next morning we figured out they were looking for the track where we were camped, probably desperate to stop for the night. We saw their wheeltracks where they’d circled around, then driven onwards. Our track was difficult to see in the daylight, so would have been nearly impossible to find in the dark.

It was pretty creepy though.

Next morning we woke ridiculously early due to the changed time zone. Another day dawned, beckoning us towards Paruku. With our diversion to Paruku and Nyarna (Stretch Lagoon on Sturt Creek), we missed about 70km of the Tanami Road.

By the time we drove back onto the Tanami at Billiluna, the road was like a highway all the way to Wolfe Creek turnoff, and beyond. By the way, you can buy fuel at Billiluna.

As you approach the Great Northern Highway, glimpses of the iconic East Kimberley scenery come into view. Once you hit the Great Northern, you’ve covered over 1,000km from Alice Springs through the Tanami Desert and into Western Australia. What a trip!

Whoever thinks the Tanami Road is boring has either driven it too many times or they had their eyes closed. This is one of the great desert drives.

The road is well-maintained and well used by mining traffic. However, it’s still remote. Make sure your vehicle’s up to it and take plenty of food and water, just in case.

If you’re looking for an alternative route from Alice Springs to the Kimberley, the Tanami Road is an obvious choice.

And for some reason, Midnight Oil’s “Beds Are Burning” was on contact replay in my head, “Four wheels scare the cockatoos. From Kintore, east to Yuendumu. The Western Desert lives and breathes in 45 degrees…”