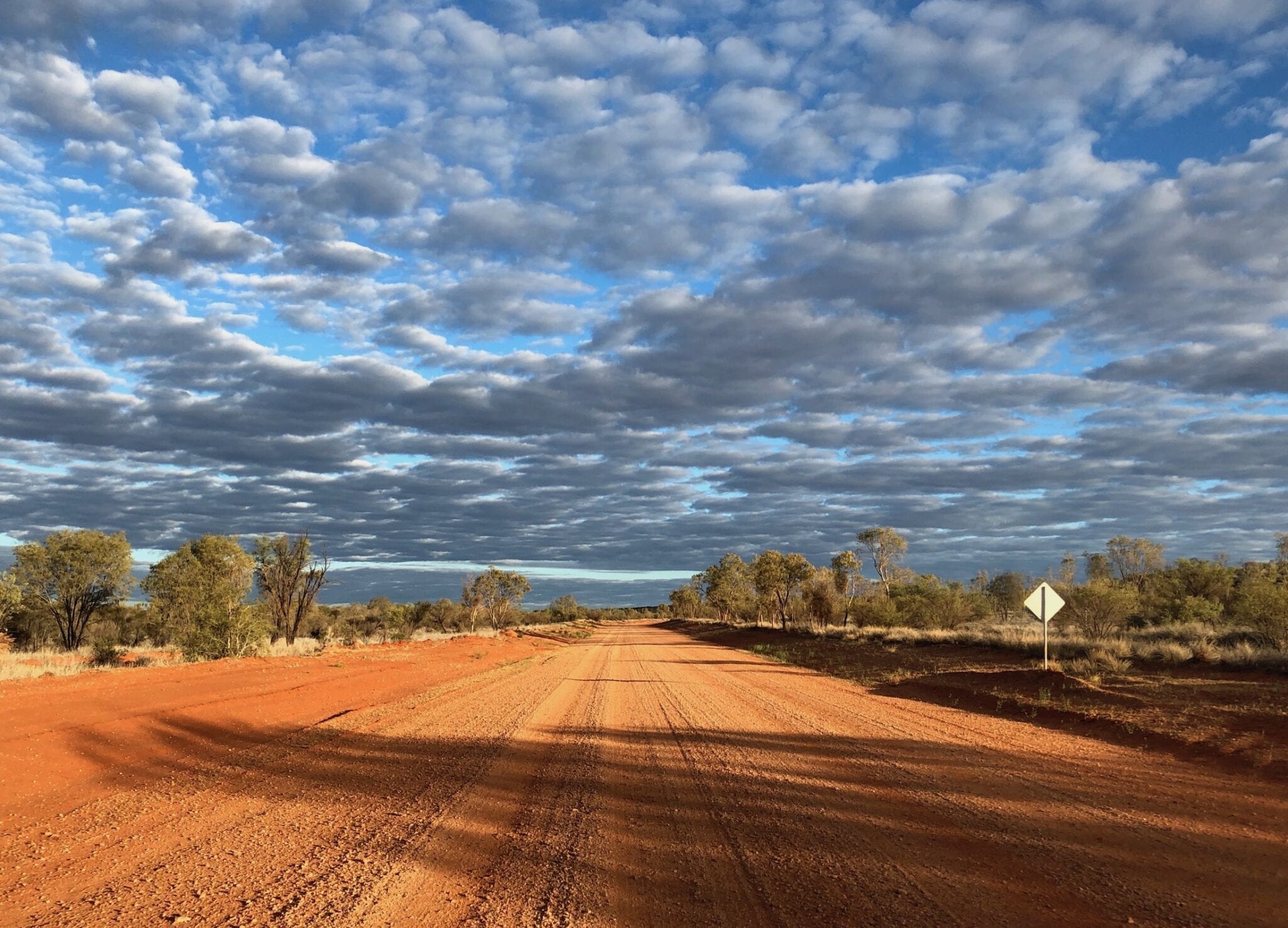 If you’re after 700 odd kilometres of peace and solitude, the Sandover Highway should be on your itinerary.

Starting below Mount Isa in central western Queensland, the Sandover Highway finally spits you out onto the western end of the Plenty Highway. From here you’re less than 100km from Alice Springs.

Let’s start at the eastern end and work our way west.

A Change Of Scenery

The Sandover Highway was built to provide access to the few large stations along the route. As you can see from the map, it does a kind of inverted loop as it drops towards Alice Springs.

We had camped at Urandangie the night before. This settlement has a pub and a few houses. You can camp a few kilometres down the road on the Georgina River. So we spent a peaceful night there by ourselves.

Next morning we headed up the Urandangie to Camooweal Road. This crosses vast black soil plains of the south-east Barkly Tableland. Headingley Station is along this road. It once covered over a million hectares (2.4M acres).

Quite a few triple roadtrains were using this route, moving cattle south and east after the Barkly missed out on wet season rains. Despite the heavy traffic, this road was in good condition.

We eventually encountered red rocky ridge country then turned left onto the Sandover Highway, at a very poorly marked turnoff. From here you’re about 55km from the NT border.

We left the ridge country and crossed a vast flat plain riddled with stones and the occasional piece of grass. The fact we passed a tree and had to take a photo, gives you a feel for how bare this plain is!

We crossed QLD/NT the border just before Lake Nash Station, which is on the Georgina River. The country abruptly changed as we crossed the border, from scrubby rocky country to wooded heathland.

It pretty well stayed the same all the way to the end of the Sandover.

Just west of Lake Nash is Alpurrurulam, a busy Aboriginal community. We called in to get fuel and couldn’t believe how busy it was! Turns out we’d arrived on a public holiday and the store was only opening for a few hours. Also, the community had hosted a lands council meeting and a Christian gathering. A busy weekend in a friendly town.

We pushed west. The road was pretty good and extremely quiet. Only one other vehicle passed or overtook us on day one… three times!

They were a group of friendly locals from Alpurrurulam, having some fun in an old Commodore. At one stage they stopped, turned around, drove straight up and over the high sand bank on the side of the road and disappeared into the scrub. We have no idea what they were doing. It was pretty funny!

Then they overtook us again and disappeared in a cloud of dust.

Apart from this one car, we didn’t see another soul. This is our kind of travel, remote and peaceful.

You’ll drive past a couple of enormous salt lakes covered in saltbush. They stand out from the surrounding red countryside with their white/grey clay base. It would be fantastic to see them on the rare occasions they’re filled with water.

The road was pretty good, corrugated in places of course. But compared to the Plenty Highway, the Sandover is a dream run. Be warned though, this can rapidly change if the grader hasn’t been along the road for a while.

Perhaps the highlight of the trip is when you drop down towards a branch of the dry Bundey River and then climb up the other side. Stop at the top and take in the magnificent view.

An ancient ridge runs away from you and the river bed is defined by a ribbon of white gums disappearing into the distance. This would be an excellent spot to camp for the night. Next time…

Camping Along The Sandover Highway

You can camp just off the road. Good camping spots are few and far between. Probably your best option is to follow one of the many drains or sneak in behind some mulga.

There are three rest areas, but they’re pretty barren and unelcoming. The first is about 30km west of Lake Nash. The second is at the intersection of Binns Track and the Sandover Highway near Ammaroo Station. The third is about 75km from the Sandover/Plenty Highway intersection.

We didn’t like the look of any of the rest areas. They were all right beside the road. You’d disappear in a thick cloud of dust if a vehicle went past.

We were treated to a sunset full of reds and pinks. Welcome to the Red Centre!

Sunrise was even better. We were on the road at sunrise and were treated to a series of deep reds and oranges contrasting with the dirty green of the trees. Desert sunrises are truly special.

You can buy fuel and basic supplies at Alpurrurulam and Alparra communities.

Permits are not needed to travel along the Sandover Highway.

As we passed the turnoff to Alparra Community, the tar unexpectedly started. With our tyres deflated, we puttered along for a while wondering if the Sandover was tarred all the way to the Plenty. Well it’s not.

Just as we were about to pull over and inflate the tyres, the road turned back into dirt. This section was quite rough, as it’s sandy and has lots of traffic. It continues in this manner until you reach the Plenty Highway intersection and the end of your adventure along the Sandover Highway.

Which Road, The Plenty Or The Sandover Highway?

The Plenty Highway is relatively busy, there’s no doubt about it. Therefore it can be horrendously rough as we witnessed on our journey from east to west. In contrast the Sandover Highway is quiet.

The thing is, the Sandover looks like it would quickly degenerate into long stretches of bulldust after a while. The dust is like talcum powder, even though the road had been recently graded. And we copped our fair share of corrugations.

The other consideration is your travel route. The Plenty (or Donohue) Highway starts just north of Boulia in Queensland. The Sandover starts roughly 300km north of there.

Perhaps if you’re planning to travel through Mount Isa, then the Sandover makes more sense. But if you’re trying to get into south-west Queensland from Alice Springs, then the Plenty is your obvious choice.

The condition of both roads varies widely, depending on lots of factors. Either one is an option.

The Sandover Highway was built as a service road, linking remote stations and communities. You won’t be gasping in awe at the striking scenery. But you will get to cross a remote part of the country and see the incredibly beautiful Red Centre up close.

There’s nothing quite like the feel of red sand between your toes.

If you appreciate desert country for its subtle changes, its ability to make you feel like a tiny speck on our huge planet, the feeling of remoteness as you gaze at the dark red sandy road with its high-sided banks… then you’ll love the Sandover.

The Sandover Highway is on Bularnu, Alyawarre, Anmatyerre and Arrernte Country.